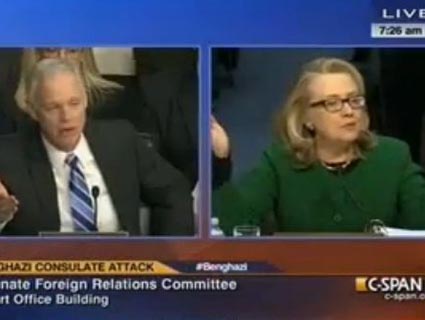 At a much-anticipated Senate hearing on Wednesday morning, Secretary of State Hillary Clinton erupted at a Republican senator who demanded to know why the Obama administration said the September 11 attacks on a US consulate in Benghazi, Libya, began as a protest.

“With all due respect, the fact is we had four dead Americans. Was it because of a protest or because of guys out for a walk one night and decided to go kill some Americans? At this point, what difference does it make, Senator?” Clinton said, raising her voice at Senator Ron Johnson (R-Wis.). “It is our job to figure out what happened and prevent it from ever happening again, Senator.”

Despite months of GOP sound and fury over the Benghazi attack—which led to John McCain and other GOP senators preemptively scuttling UN Ambassador Susan Rice’s bid to replace Clinton at Foggy Bottom—for the most part Republicans at the hearing were respectful of Clinton, who has recently been ill. (GOP Senator Rand Paul of Kentucky did suggest that Clinton should have been “fired and replaced” for being responsible for what he called “the worst tragedy since 9/11”). When Senator James Risch (R-Idaho) asked her about the talking points (which tied the attacks to supposed protests over an anti-Islam video) that Rice quoted when she appeared on several Sunday morning television shows to discuss the Benghazi assault, Clinton said that the motivations of the attackers have yet to be completely determined. There was no organized protest at Benghazi, but the role of that anti-Islam film in motivating the attackers in Libya (as well as protesters elsewhere in the Middle East) remains murky. After all, the group suspected of carrying out the attack in Benghazi has cited the movie as motivation.

Still, Senator Johnson accused the administration of deliberately misleading the public and of using the fog of war that followed the attacks as an excuse. “Nothing could be further from the truth,” Clinton declared. (The information that the Benghazi attack had begun as a protest actually came from the CIA.)

Conservatives are likely to frame Clinton’s contention that the existence (or lack thereof) of any protest doesn’t really matter as merely a way to sidestep the administration’s initial attempt at a some sort of a cover-up. But her point is that if there had been a protest, the consequences of the attack would not have been any less terrible and the administration would have been no less culpable, so there was no motivation for them to lie. In other words, sometimes a mistake (even one that originates with the CIA) is just a mistake, and not a conspiracy.

UPDATE: Here’s video of the exchange, via C-Span: