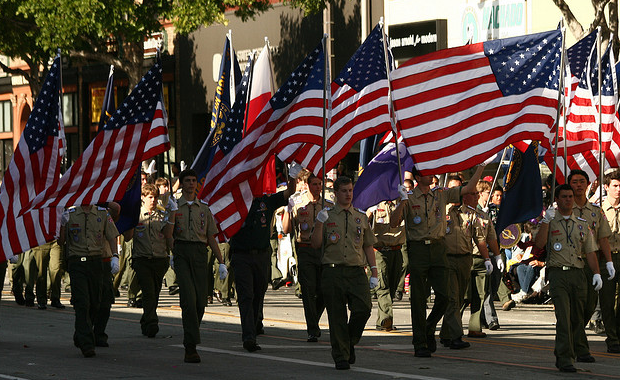 Update: Pack 442 took down its non-discrimination statement on Saturday after pressure from the National Capital Area Council, and will keep its charter as a result.  Theresa Phillips, committee chair of Pack 442 tells Mother Jones the pack will continue to welcome gay members and families, even without the statement.  “I asked for my name to removed from the charter because I feel like if gay/lesbian individuals are not worthy of being registered leaders, then I am not either,” Phillips says.

The Boy Scouts council in charge of overseeing scout programs in the Washington, DC-area is threatening to kick out a Maryland pack for posting a statement on its website declaring it won’t discriminate against gay scouts. The pack has to decide by tomorrow whether to remove the statement.

In September, the families of Pack 442, which is based in Cloverly, Maryland (a small town less than 20 miles from the nation’s capital), anonymously voted and overwhelmingly approved to adopt a non-discrimination statement. According to Theresa Phillips, committee chair of Pack 442, the pack wanted Boy Scouts of America to know “we will not stand for the discrimination of homosexual minors or adults whatsoever.” Here’s the sentence causing the controversy:

Not long after the statement was posted, the National Capital Area Council (NCAC), one of the bigger local councils of the Boy Scouts of America, asked the pack to strike it from the website. “At first they [said] they would “allow” us to leave it up based on our right to freedom of speech. Now they are doing a 180 and basically asking us to either conform to BSA’s discriminatory policy or get out,” says Phillips.

Les Baron, CEO and Scout Executive of NCAC, confirms to Mother Jones that if the pack doesn’t erase the declaration, “they will not be recognized as an organization, although that’s our last resort.” That means that the pack will lose access to member insurance, rank badges, and scout camps. The only problem with the statement, Baron acknowledges, is the reference to sexual orientation. “That’s a message that’s against our policy, and we don’t want it continue to be out in our community,” Baron says.

In July 2012, the Boy Scouts reaffirmed its ban on gay scouts and scoutmasters, and the organization has been losing financial backers as a result. This isn’t the first time the organization has threatened to kick out a chartered organization for welcoming gay members. In 2003, scouts in Sebastopol, California, lost their charter for refusing to drop a similar statement. In 2012 in Ottawa Hills, Ohio and Redlands, California, families were forced to choose between accepting gay members and retaining membership.

“To think that the Boy Scouts would rather cast out elementary school children than accept a parent-approved policy allowing gay children and parents to participate is just unconscionable,” Herndon Graddick, president of the Gay & Lesbian Alliance Against Defamation, tells Mother Jones. “How many young Scouts is the BSA willing to sacrifice in order to preserve its harmful and discriminatory policies? This despicable act of bullying and intimidation is yet another reminder that the BSA is out of touch with its members and the American public at large.”

Baron says that “we’re working through our differences with the pack right now.” Pack 442’s website is hosting an online poll, open to the public but intended for pack families, on whether it should remove the non-discrimination statement. It must decide whether to apply for membership by January 26, so it is closing the poll at 8 PM on Friday. Phillips says the pack has not determined yet whether it will take it down, and is waiting for the poll to determine “how families feel on this matter.“ According to Pack 442’s website, if they do decide to remove it, they plan to return to a “Don’t Ask Don’t Tell” policy.

“Clearly the Council’s threat reflects a fear that Boy Scouts of America will crack down on NCAC, which has a lot on the line,” says Zach Wahls, an Eagle Scout raised by two lesbian mothers, and founder of Scouts for Equality. “It’s unfortunate and disappointing that they’re bowing to this pressure instead of opposing the ban and being brave, as Scouts swear to do every time they recite the Scout Law.”

Correction: An earlier version of this post used the terms “troops” and “packs” interchangeably. Packs are only used to describe units of the Cub Scouts, BSA’s program for boys aged 7 to 10.