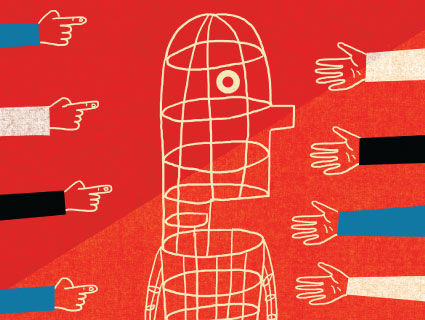 By just about every standard, Dr. Nick Gorton is like any regular, well-adjusted guy. A 42-year-old veteran emergency-room doctor in the San Francisco Bay Area, he is happily married to his partner of 16 years. He is a self-professed science geek who enjoys hanging out with his Chihuahua-Jack Russell mix and spending too much time online.

But according to the American Psychiatric Association, Gorton has a major mental illness: gender identity disorder. Gorton was raised female, though as early as nursery school he knew he did not feel like a girl. Or, in the phrasing of Diagnosis 302.85 in the fourth edition of the APA’s Diagnostic and Statistical Manual of Mental Disorders (DSM), he had “a strong persistent cross-gender identification” and “persistent discomfort with his or her sex or sense of inappropriateness in the gender role of that sex.”

Transgender activists have long called for this diagnosis to be revised or removed altogether from the DSM, arguing that being transgender is not a disease but a human variation—more like being left-handed than schizophrenic. The manual listed homosexuality as a form of “sexual deviation” until 1974, and some advocates say that in a generation most people will see the diagnosis of gender identity disorder as equally absurd. Now, a new diagnosis has just been approved by the American Psychiatric Association, but challenges remain for transgender people in need of help.

Until the FAA changed its policy recently, transgender people aspiring to be pilots had to undergo expensive psychological testing.

Many trans people do describe being intensely unhappy before they came out—feeling betrayed by their bodies and unable to live as their true selves. This disconnect between one’s body and sense of self, known as gender dysphoria, can be crippling. “I literally spent the first three decades of my life, pretty much every day, unhappy,” Gorton says. He recalls seeing homeless men on the streets of New York City and wishing he could trade places with them just to have their bodies. In his early 30s, he decided to undergo a course of treatments that included a mastectomy, male hormones, and talk therapy. Now that he’s transitioned to living fully as a man, he says, his “tremendous amount of mental-health issues” are “virtually gone.”

Yet according to the current DSM, he still has a mental-health problem. The manual is the scientific bible by which psychiatrists and other mental-health professionals standardize, identify, and, importantly, bill insurance companies for their patients’ afflictions. Because the gender identity disorder diagnosis includes “a lot of stuff that basically just describes trans people,” explains Dr. Dan Karasic, a psychiatrist at the Bay Area-based Transgender Life Care Program, there is no way to be transgender, according to the DSM, without being mentally ill.

Hormone treatments and sex reassignment surgery can cost tens of thousands of dollars, and without a specific medical diagnosis, no health insurance policy will cover them.

That can have devastating consequences. “We lose our homes, we lose our families, we lose our jobs,” says Kelley Winters, a transgender activist and the founder of GID Reform Advocates. Family law is littered with cases of transgender parents whose parental rights were threatened or terminated because their ex-spouses or former partners argued that their mental state put their children at risk. Until the Federal Aviation Administration changed its policy last August, transgender people aspiring to be pilots were required to undergo expensive psychological testing—which they often had to pay for themselves—before they could get a license.

The diagnosis has also been used to block legal equality for transgender people. At a hearing before the Maryland state Senate last February, Peter Sprigg of the conservative Family Research Council cited the “behavior” trans people “engage in in order to fulfill their sexual desires” and pointed to the DSM to support his argument against a bill that would protect trans people from housing and employment discrimination. “We should show compassion for these individuals, but that should manifest itself in mental-health treatments to help them become comfortable with their biological sex, not in legislation which denies the reality of their condition.”

Yet, advocates for updating the manual have also been in a bind: Medical interventions like hormone treatments and sex reassignment surgery can cost tens of thousands of dollars, and without a specific medical diagnosis, no health insurance policy will cover them. (Not that many do cover them even with a diagnosis.)

Major revisions to the DSM occur about once every 15 years, and the APA is set to release a new edition in May. In the new version, gender identity disorder will be renamed “gender dysphoria.” The new description specifies that this diagnosis only applies if a patient’s condition causes active suffering or debilitation, such as the inability to hold a job.

Some advocates are encouraged by the move to narrow the definition. “Once people have gotten whatever the requisite treatment is and they’re not in that state of immediate distress, then they no longer have a mental illness,” Karasic says. Yet the change includes a loophole that allows clinicians to make the diagnosis after patients no longer have symptoms in order to get their treatment covered by insurers.

“The reason we proposed this is that this would allow them to still have access to medical treatment” and coverage, says Dr. Kenneth Zucker, chair of the committee that drafted the new revision. Zucker is a controversial figure: The head of a clinical program in Toronto, his approach to treating transgender children has included discouraging behavior like cross-dressing and trying to steer kids toward living life in their birth gender. His appointment by the APA generated alarm among trans activists, but in the end their concerns were not realized; the new diagnosis, most acknowledge, is an improvement over the existing one.

With the argument over diagnosis settled at least for the next few years, advocates on all sides say it’s time to focus on showing the rest of society the normalcy of transgender people’s lives. “Things that are in the DSM are not disorders of character,” says Gorton. “They’re disorders of chemistry.”