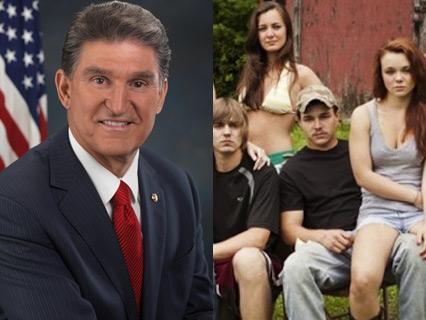 In case you haven’t heard about Buckwild, it’s the show that intends to fill the void in your life left when Jersey Shore goes off the air in late December. Buckwild, premiering Thursday January 3, is an unforgiving cavalcade of cultural stereotypes. The easiest way to describe the show is Jersey Shore, but transposed to small-town West Virginia. The series follows a group of thickly-accented young adults as they swear, fight, carouse, and fornicate their early twenties away. Stars include “Justin Beaver,” one of the adrenaline-junkie males, and Shae, a blonde and “spicy” Southern belle who is sexually attracted to degenerates. The cast also enjoy shooting things, blowing stuff up, and operating all-terrain motor vehicles with zero regard for logic or safety.

Sen. Manchin isn’t pleased with the above representation of his home state. And last Wednesday, he started tweeting about it. He began by addressing a piece posted to a satirical “fake news” website claiming that Manchin had singlehandedly vanquished Buckwild.

To clear up confusion on “Buckwild;” I wish I could take credit for stopping anything that portrays #WV poorly, but this story is satire

My message to MTV is this: One day this could be your kids, and I hope you put a stop to such an inaccurate and despicable portrayal. 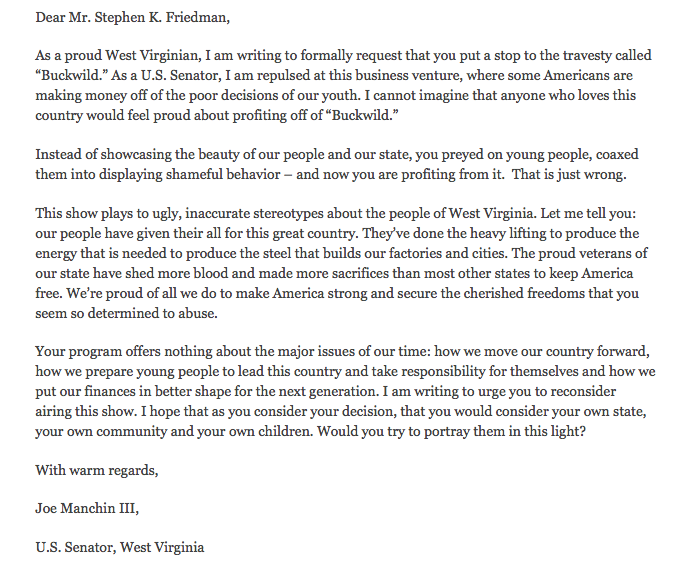 (MTV has yet to respond to the senator’s plea for cancelation.)

And here he is on The Today Show on Monday, railing against the pop-culture “travesty”:

Manchin is also notable for his vote against the repeal of “Don’t Ask, Don’t Tell,” his promises to fight health care reform, and for this campaign ad from October 2010, in which he quite literally blasts a whole through a cap-and-trade bill while pledging to “take on Washington and [the Obama] administration to get the federal government off of our backs and out of our pockets”:

With this ad, it’s almost as if Manchin created his own slice of reality television, presenting himself to voters as a butch, over-the-top West Virginian caricature. (Plus, with his penchant for shooting inanimate objects, he might actually fit in well with the kids of Buckwild better than he’d like to admit.)

At this point, the senator’s crusade against the forces of Buckwild seems like a bit of a lonely road. West Virginia’s Democratic governor Earl Ray Tomblin has yet to weigh in on the show. Neither has Manchin’s fellow West Virginia senator Jay Rockefeller (also a Democrat). The Mountain State’s House delegation (Shelley Moore Capito, David McKinley, and Nick Rahall) have also kept quiet.

This isn’t the first time Manchin has raged against on-screen depiction of his constituents. In 2008, he spoke out against a casting call for the Julianne Moore-starring horror flick Shelter, which sought an extra with “physical abnormalities” to depict West Virginia mountain folk. Representatives Capito and Rahall also issued their criticism of the production, and the movie’s casting director was soon canned.

But if MTV’s track record of offending politicians with their reality shows and making a lot of money anyway is any indication, it is probably safe to bet that Manchin won’t score a similar victory this time around. Furthermore, it’s worth noting that Jersey Shore faced far more political opposition prior to its premiere in 2009, and it still went on to set ratings records for MTV and leave its rowdy imprint on international pop-culture.