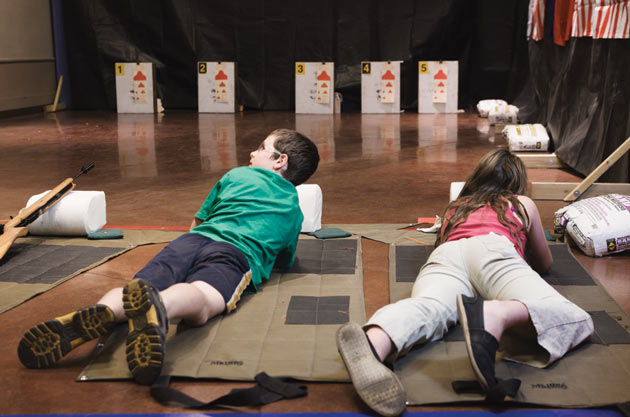 Kids squeeze off rounds at the Self Reliance Expo in Mesa, Arizona, one of the nation's leading "readiness" trade shows.Mark Peterman

WITH HIS LOAFERS, KHAKIS, and polo shirt, James Talmage Stevens isn’t exactly dressed for the end of the world. When I run into the 73-year-old Texan 10 days before the November election, America’s most celebrated self-reliance guru seems better suited for an early bird special than a black swan event. The only hint of his notoriety is a patch over his left breast depicting his professional alter ego—”Doctor Prepper.”

Stevens’ book, Making the Best of Basics, may be the closest thing the survival industry has to a bible (aside from the actual Bible). It has sold more than 800,000 copies since hitting the shelves at Kmart during the gas crisis in 1974. Stevens is not actually a doctor, and, come to think of it, he’d rather you not call him a “prepper,” which he considers a slur meant to impugn self-reliant folks like himself as paranoid loons. But it’s become part of the lexicon, and Stevens is somewhat paranoid about where the United States is headed (he foresees a borderline tyrannical second Obama term that begins with massive gun confiscation and ends who-knows-where), so he’s rolling with it. As he puts it, “I don’t really like cuss words, but I know how to use them and I know what they mean.” Besides, it’s good for business.

I met Stevens at the Self Reliance Expo in Mesa, Arizona, one of the nation’s leading “readiness” trade shows, where attendees (about 5,000 over two days) shop for bulletproof vests and dehydrated peas or practice suturing an open wound on a severed pig’s foot. Stevens’ cosponsorship amounts to a sort of papal blessing for the event. “He’s the bomb, he’s the godfather,” says Tony Tangalos, the Phoenix-based host of The Prepper Patch, an AM radio show. “He’s like the Elvis Presley.”

Over the past four years, Stevens has witnessed something of a renaissance, coming out of retirement to hawk an expanded edition of Basics and a water-filtering system that’s so efficient, he tells me, it could make urine taste like bottled water. The product has netted Stevens and his partner $1.5 million in profits in just over a year. And he’s far from the only one making a living off the coming collapse of civilization. Sites like Revolutionary Realty and Survival Realty list rugged properties with amenities such as a “defensible hillside location.” There are no fewer than three prepper dating sites—Survivalist Singles (“Don’t Face the Future Alone”) boasts 4,000 members, mostly male. Both the National Geographic Channel and Glenn Beck TV have gotten into the game with their reality shows Doomsday Preppers and Independence USA. The preserved food company Shelf Reliance reported a 708 percent explosion in revenues over the past three years. Overall, the size of the market for Americans expecting major disruptions caused by hurricanes, floods, earthquakes, tornadoes, terrorism, pandemics, price shocks, gas shortages, civil unrest, martial law, nuclear disasters, and/or the Rapture is estimated to be $500 million.

“If the economy falls apart, people don’t have food. People who are looking for food, they’re gonna have their guns with them. People want body armor so they can protect themselves.”

Welcome to the doom boom.

Humans have been preparing for the worst for millennia, but modern Americans have turned it into an art form. At the dawn of the Atomic Age, suburbanites scrambled to build backyard shelters and the government stockpiled food in anticipation of the day after. The spiraling inflation of the 1970s brought with it a spike in gold sales and backwoods land purchases. During the Clinton years, camo-clad survivalists prepared for the black-helicopter invasion, and Y2K briefly made prepperism mainstream. But perhaps the best salesman for the notion that we’re on the verge of financial, technological, and political collapse has been the current occupant of the Oval Office. Stevens says of the president, “He is the leading promoter of this without even knowing it.”

At the Self Reliance Expo, the prospect of a second Obama term is seen as both a catastrophe and an opportunity. “There’s a lot of people I talk to who say, ‘Depending on what happens in the election, I’m going to buy some body armor,'” says Derek Williams, president of the Salt Lake City-based company Amendment II. Its Centurian children’s tactical vest costs $499. “If the economy falls apart, people don’t have food. People who are looking for food, they’re gonna have their guns with them. People want body armor so they can protect themselves.” 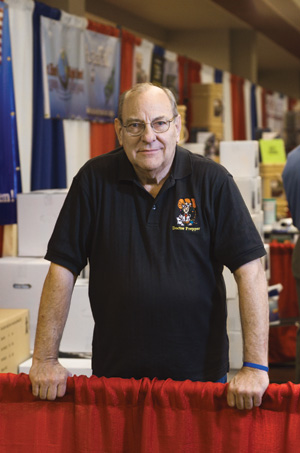 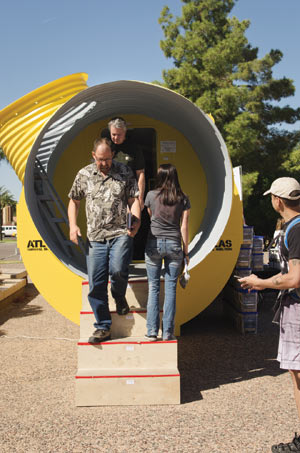 Tangalos, the talk show host, believes Obama is expediting the arrival of the Islamic Antichrist. He’s planning on establishing “Christian Transition Villages” in western Arizona “for people who believe that we may be close to experiencing some dramatic man-made or naturally occurring changes in our world.”

Robert Wiedemer, whose 2006 America’s Bubble Economy foresaw the collapse of the housing market, warns that government debt will lead to hyperinflation. “Does anyone here remember 15 percent inflation?” he asks during a presentation before pulling out a Zimbabwean $100 trillion bill. Several attendees ask him what will happen if, God forbid, Obama gets a second term. Short answer: We’re screwed. Also: Buy my book.

Getting ready for the day when TSHTF (prepper shorthand for “the shit hits the fan”) isn’t cheap. Shelf Reliance hawks the “Netflix for food,” a monthly shipment of freeze-dried products that will come as long as the post office still delivers. A cache of 8,671 servings of its gluten-free, vegetarian emergency rations goes for $1,799.99 at Costco.

For $72,000, you can get a 40-foot-long underground steel tube that comfortably houses a family of six, provided there’s no fighting over the queen-size bed and no one has ever watched The Shining. An after-market fake tree or rock to mask the air vent costs extra. Buy now and they’ll throw in 10 acres at a “secret prepper community” near Kingman, Arizona, complete with a sign that warns, “We Will Blow Your Ass Away!” “Underground this far, it’s basically EMP-proof,” says Kaden Atwood, who’s offering tours of a model outside the convention center. He’s referring to an electromagnetic pulse, a burst of radiation triggered by a nuclear device that could theoretically shut down the electrical grid—one of Newt Gingrich’s pet preoccupations. (The former speaker of the House has warned that an EMP set off by America’s enemies could “throw all of our lives back to an existence equal to that of the Middle Ages.”)

Video: Watch Tim Murphy taste-test survival-food selections, from freeze-dried eggs to the Candwich (“the Sandwich in a Can”).

Amid all the eagerness to equip for the coming upheaval, Stevens tells me he’s wary of his colleagues who are motivated less by a desire to help than by the bottom line. “Now, everybody and his twin brother who’s spastic and is able to cut and paste have become preppers,” he laments. Many prepper websites feel like they could be gone tomorrow. A Mesa wholesaler founded 2012supplies.com to serve people who believed that the Mayan apocalypse was coming on December 21; in the meantime, he’s appeared everywhere from Doomsday Preppers to the New York Times. The makers of the NukAlert nuclear radiation counter brag that their product has been “verified by National Radiological Laboratory,” an institution that seems to exist only in the product description. And that’s to say nothing of celebrity doomsayers like Glenn Beck and Sean Hannity, who endorse shady gold dealers and pricey freeze-dried food. (Food Insurance’s Hannity Ultimate 80-day supply goes for $989.99.)

The industry’s leading lights clearly see the need to battle the notion that they’re a bunch of hucksters and kooks. “We really are normal people,” insists Amy Alton, a registered nurse who is one half of the prepper power couple Dr. Bones and Nurse Amy. They are the authors of The Doom and Bloom Survival Medicine Handbook (“Keep your loved ones healthy in every disaster, from wildfires to a complete societal collapse”), one of the best-selling prepper guidebooks on Amazon.com. She later approaches me to emphasize that she’s selling insurance, not fear. “I just want you to know,” she says, pointing out the Doom and Bloom logo, “that that tree is the tree of life.” (Technically, it’s a tree of life overlaid on a mushroom cloud.)

Perhaps the best salesman for the preppers has been the current occupant of the Oval Office: “He is the leading promoter of this without even knowing it.”

Though doomsday evangelists fantasize about reaching mainstream consumers, hardcore prepping attracts a fairly limited demographic. Stevens pegs the market at about 4 million people, and he has his theories on why it’s not for everyone. “It’s the upper-middle white class that shows up here,” he says. “I’ve seen two or three black people and that’s about it. They never show up to these places. They don’t get it. Culturally. It’s not brainpower, it’s not color, it’s cultural. They’ve never lived this lifestyle. More important is the car with thin tires and the beautiful finish and nice clothes and rings. I’m sorry, that’s just the way it is!”

As I browsed the aisles of portable solar generators and freeze-dried beef Stroganoff, the irony seemed inescapable. Two thousand miles away, New Yorkers were emptying grocery stores of everything from Fiji water to baby food in preparation for a storm that would leave thousands without power for weeks. Viewed in that light, the preppers kind of had a point: Shouldn’t we all buy a few cases of OvaEasy powdered eggs, just in case?

Even before climate change, events like hurricanes and drought and pestilence and the plague were constants throughout history. Yet most of the cataclysms preoccupying the preppers are unlikely at best. After the election was over, I called Stevens at his home, a stone house tucked in the woods with a water pump and a cache of freeze-dry—about as close to off-the-grid and self-reliant as you can get in the San Antonio metro area. Doctor Prepper told me he’d seen copies of the draconian executive orders the president was about to unveil and it wasn’t pretty.

“They’re getting worse,” he said, his voice dropping. In the meantime, he’d been going to gun shows and making sure to get the message out. “I just came back from one last weekend and my partner’s going to one this week. I couldn’t because I knew you were going to call and I wanted to be here.”