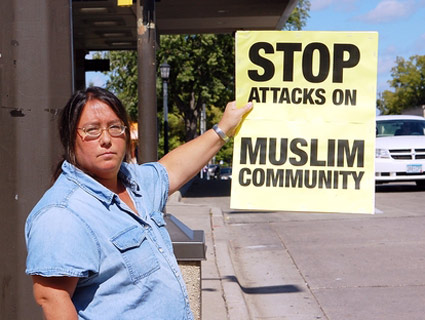 This week, 11 Muslim American civil rights organizations issued a plea to the GOP: stop alienating us.

The Council on American-Islamic Relations (CAIR), along with 10 other groups, took out a full-page ad in the conservative Washington Times on Wednesday, offering “an open invitation to reassess your party’s current relationship with American Muslims.” Pointing out that while in the past the Muslim community largely voted Republican, the letter argues that “government-sanctioned discrimination against Muslims” and “despicable Islamophobic remarks” have driven away Muslim voters in recent years.

According to James Zogby, the Arab American Institute’s (AAI) president, the GOP should have an opening with the Muslim American community because of its conservative values. CAIR National Legislative Director Corey Saylor agrees: “Muslims follow a conservative traditional religion and many of those values are reflected in the Republican party.” But the Party hasn’t tried very hard to capitalize on this; an August poll from the AAI found that 47 percent of Republicans viewed Muslim Americans unfavorably.

And it hurt them come November. A post-election poll released by CAIR (where I formerly interned) indicated that in a national survey of more than 650 American Muslim voters, 7 percent identified as Republicans, and only 4 percent voted for Romney. By contrast, in 2000, the American Muslim Political Coordination Counsel endorsed the Republican ticket and over 70 percent of Muslims voted for George W. Bush.

This loss of Muslim voters could be due to increasing Islamophobic rhetoric and action taken by GOP politicians over the past couple of years, including Rep. Peter King’s hearings on the radicalization of the Muslim community, Ill. Republican congressional candidate Joe Walsh’s comment that there is a “radical strain of Islam in this country,” and Herman Cain’s demand during the Republican primaries that any Muslim seeking a role in his cabinet would need to take a loyalty oath. By not denouncing these extreme voices, the Muslim organizations argue that the GOP is essentially giving them “tacit approval.”

2011 and 2012 also saw a flurry of anti-Sharia laws being proposed throughout the country, with the latest one passing in Kansas. By CAIR’s count, of the 78 “bills or amendments aimed at interfering with Islamic religious practices” proposed in 2011-12, 73 were introduced by Republicans.

There are exceptions, of course. When Rep. Michele Bachmann accused Secretary of State Hillary Clinton’s aide Huma Abedin and Minnesota Rep. Keith Ellison of having ties to the Muslim Brotherhood, Sen. John McCain blasted Bachmann for her “…specious and degrading attacks against fellow Americans on the basis of nothing more than fear of who they are and ignorance of what they stand for.” While appreciative of efforts like McCain’s, CAIR calls for stronger action against biased speech, increased efforts to engage Muslim voters, and opposition to discriminatory legislation.

Attacking Muslims may ultimately turn out to be a losing political strategy for the GOP. CAIR published a round-up of how the “anti-Muslim caucus” fared on November 6 and found that of the 11 members of Congress who make “repeated use of biased themes regarding Muslims,” four will not be returning for the 113th session. The seven who remain will need to weigh whether continuing to estrange Muslim voters—a group that’s concentrated in swing states like Florida, Ohio, and Virginia—is a risk they’re willing to take.