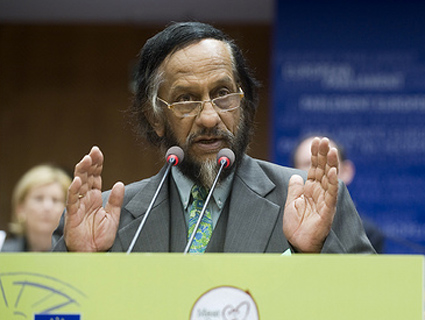 On Thursday, someone posted part of a draft version of the forthcoming report from the Intergovernmental Panel on Climate Change (IPCC) online, prompting a new round of internet freak-out over the report and the panel.

The IPCC’s fifth assessment report on climate change—known as AR5—is slated for release starting in 2013. A blogger at the website Stop Green Suicide posted the draft of Working Group 1’s portion of the report, which deals with the physical science of climate change, and it was reposted at the popular skeptic blog Watts Up With That. The poster was a guy by the name of Alec Rawls, who, in addition to writing about how solar activity is causing global warming, is also the son of the late philosopher John Rawls and the author of a book about how a “terrorist memorial mosque” being built near the site of the Flight 93 memorial in Pennsylvania.

Rawls signed up to be a reviewer for the draft report, which is really easy to do. Basically all you have to do is ask to see a draft and agree that you won’t release it. (Seems like that last part didn’t work very well here.)

Rawls says the release was justified because a lot of the scientists working on it work at public institutions, and the IPCC shouldn’t be allowed to work in secret:

So may we please see this “science” on the basis of which our existing energy infrastructure is to be ripped out in favor of non-existent “green” energy? The only reason for secrecy in the first place is to enhance the UN’s political control over a scientific story line that is aimed explicitly at policy makers. Thus the drafts ought to fall within the reach of the Freedom of Information Act.

Rawls believes that the draft includes a “game-changing admission” that supports the argument that solar forcing—i.e., the sun—is causing the planet to warm, not carbon dioxide. Those claims about the new report have been pretty soundly debunked here and here.

As you can imagine, skeptics on the internet have gone bonkers over this, much like they did over the 2009 “Climategate” emails. But as with that incident, they’re focusing in on a cherry-picked line that ignores everything else in the draft report.

The IPCC issued statement calling the release “unauthorized and premature,” and warned that it “may lead to confusion because the text will necessarily change in some respects once all the review comments have been addressed.” They did not comment on the contents of the draft report, other than noting that all drafts are “works in progress.”

Like any report, it’s not done until it’s done, and there are likely to be more changes before it is officially released next year. Yet the incident has rekindled complaints about the IPCC’s process. Andy Revkin has a good run down of those complaints, which include concerns about fixing errors and about how different working groups operate. I’ll also note that while skeptics love to trash the IPCC as “alarmist,” it has also been flagged for consistently underestimating climate impacts. Creating these reports involves hundreds of scientific papers, hundreds of scientists, and the review of governments, most of them working on a voluntary basis. It’s almost inevitable that it would face some challenges.

Peter Frumhoff, director of science and policy at the Union of Concerned Scientists, summed up the latest flap well on Friday: “The IPCC is the most heavily scrutinized scientific body in the world. It’s unfortunate, but not unexpected, that someone would abuse its peer review process. This won’t be the last attempt to undermine the IPCC.”