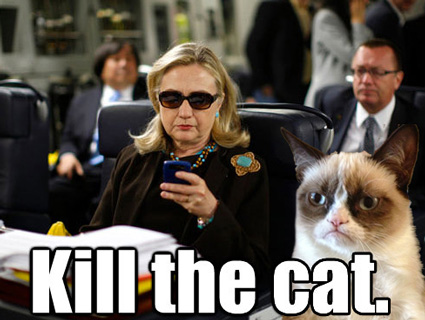 On Wednesday, Public Policy Polling continued its tradition of releasing somewhat incongruous survey results we didn’t know we wanted but clicked on anyway. The latest: Per Tom Jensen, Secretary of State Hillary Clinton is so popular right now that if she ran for president, she’d put Kentucky in play:

If Hillary Clinton was the Democratic candidate for President in 2016, she could win Kentucky. Against one of its home state Senators, Rand Paul. Despite the fact that the Republican nominee has won the state by at least 15 points in each of the last four Presidential elections. That, maybe more than any other data point that’s come out in the last month, shows what a formidable candidate she would be and how important it is for Democrats that she run.

Clinton has a 48/42 favorability rating with Kentucky voters. By comparison Barack Obama’s approval rating is 38/59. Clinton would lead Rand Paul 47-42 and Marco Rubio 48-40 in hypothetical match ups. That’s because Clinton gets 73-74% of the Democratic vote in those match ups, similar to the 72-73% of the Republican vote that Paul and Rubio get. The reason Democrats lose time after time in Kentucky despite having a large registration advantage is that a very large number of Democrats don’t vote Democratic for President, but Clinton would win over a lot of the party faithful who have declined to support Obama, Kerry, and Gore.

It’d make sense that Clinton, the former first lady of Arkansas, would outperform President Obama and a senator from Boston in the heart of Appalachia. It also makes sense that a secretary of state, removed from the day-to-day grind of the fiscal cliff feuds and contraception fights, would be more appealing to the general population than a senator who’s in the middle of both of those things.

But the poll is useless for another reason: Conservatives will probably learn to hate Hillary Clinton again. It wasn’t so long ago that the conservative fever swamps were filled with wild accusations of her lesbian past and her murder of Vince Foster—a theory parroted by, among others, Rush Limbaugh. The actual film at the heart of the Citizens United decision, a 2008 attack-umentary Hillary: The Movie, trumpeted the (false) claim that Hillary Clinton had killed a cat. As my colleague Stephanie Mencimer reported at the time:

An alleged victim of the former president’s sexual advances, Kathleen Willey, appears in the film a decade after her moment on the national stage. Willey shows extensive signs of plastic surgery and paranoia and reprises some of the material from her recent book, Target: Caught in the Crosshairs of Bill and Hillary Clinton. In a taut-lipped interview, she suggests that after her name surfaced in the Paula Jones sexual harassment lawsuit against Bill Clinton, the Clintons arranged to have her kitty assassinated. Willey, who attended last night’s screening, says she got an anonymous phone call taunting her about her missing cat and later discovered a cat skull on her porch. She says a private investigator tipped her off that the White House was having her investigated.

The idea of Hillary Clinton as a much-loved bipartisan figure is a relatively recent invention—and a fleeting one at that.