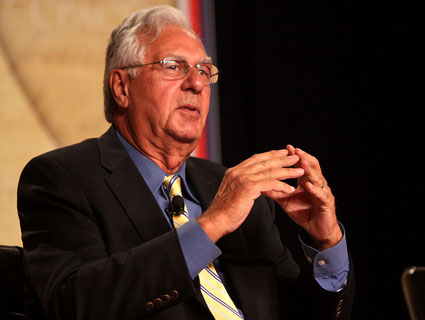 This story has been updated. Click here for the latest.

In a move not publicly announced, former Rep. Dick Armey, the folksy conservative leader, has resigned as chairman of FreedomWorks, one of the main political outfits of the conservative movement and an instrumental force within the tea party.

Armey, the former House majority leader who helped develop and promote the GOP’s Contract with America in the 1990s, tendered his resignation in a memo sent to Matt Kibbe, president and CEO of FreedomWorks, on November 30. Mother Jones obtained the email on Monday, and Armey has confirmed he sent it. The tone of the memo suggests that this was not an amicable separation. (See Armey’s email below.) Armey demanded that he be paid until his contract ended on December 31; that FreedomWorks remove his name, image, or signature “from all its letters, print media, postings, web sites, videos, testimonials, endorsements, fund raising materials, and social media, including but not limited to Facebook and Twitter”; and that FreedomWorks deliver the copy of his official congressional portrait to his home in Texas.

“The top management team of FreedomWorks was taking a direction I thought was unproductive, and I thought it was time to move on with my life,” Armey tells Mother Jones. “At this point, I don’t want to get into the details. I just want to go on with my life.”

In the email, Armey indicated that he wants nothing to do with FreedomWorks anymore. He asked that all user names, passwords, and security-related data created in his name be emailed to him by the close of business on December 4. He even insisted that FreedomWorks—”effective immediately”—was “prohibited” from using a booklet he authored. Was Armey’s resignation a reaction to the recent election results? “Obviously I was not happy with the election results,” he says. “We might’ve gotten better results if we had gone in a different direction. But it isn’t that I got my nose out of line because we should’ve done better.”

Armey declined to specify his disagreements with FreedomWorks. Asked if they were ideological or tactical, he replies, “They were matters of principle. It’s how you do business as opposed to what you do. But I don’t want to be the guy to create problems.”

After leaving Congress in 2003, Armey joined the conservative advocacy group Citizens for a Sound Economy as co-chairman. The following year, the organization, which had been cofounded by Charles and David Koch, split off to become FreedomWorks. Its sister outfit, Americans for Prosperity, has been a prominent grassroots conservative group.

FreedomWorks, under Armey’s leadership, was a key player in the rise of the tea party in 2010. The organization helped elect tea party favorites, including Sen. Mike Lee (R-Utah) and Reps. Renee Ellmers (R-N.C.) and Tim Scott (R-S.C.). Armey led the fight to eliminate Obamacare, emailing every Republican member of Congress after the 2010 elections with a strategy for gutting President Obama’s signature health care law. FreedomWorks has acted an connector between tea party groups around the country, organizing protests against Obamacare and expanding the ranks of the conservative movement. In 2010, Armey and Kibbe together published Give Us Liberty: A Tea Party Manifesto.

Armey says he doesn’t know what he will do next, but he is considering consulting work.

As I resign from all board positions and duties, please see below a list of dispositions on outstanding issues: I expect to be fully compensated through the expiration date (December 31, 2012) of my current consulting contract with FreedomWorks. Henceforth FreedomWorks shall be prohibited from using my name, image, or signature in any way or for any purpose without my written permission or in the event of my death, without my heirs written permission.

Effective immediately FreedomWorks is prohibited from using my booklet or any updated versions of my booklet “Hitting the Ground Running” without my written permission which I innovated while still in congress and trusted to Max Pappas to update for new member orientation. I request that FreedomWorks deliver the copy of my official congressional portrait to my home in Texas.

UPDATE: More details emerged on Monday about Dick Armey’s departure from FreedomWorks. The Associated Press obtained a contract dated September 24 indicating that Armey will make $8 million in consulting fees in exchange for leaving the organization. In an email to Mother Jones, Armey confirmed the $8 million deal, and said the contract was between him and FreedomWorks board member Richard Stephenson.

A handful of key FreedomWorks officials said Monday that they, too, were leaving the organization. According to Roll Call, Max Pappas, the former vice president for public policy and government affairs, and campaigns director Brendan Steinhauser are both quitting the group. Two staffers who worked with Steinhauser have also departed.

FreedomWorks president and CEO Matt Kibbe and several of the group’s board members have not returned calls for comment.

Click here to return to the top of the story.