If a notable woman dies and a major national newspaper doesn’t report it, did it actually happen?

Big papers’ lists of significant deaths in 2012 overwhelmingly feature men. The Washington Post put 18 women and 48 men on its list. On the other side of the country, the Los Angeles Times listed 36 women and 114 men. And lest you think this is some kind of freak 2012 phenomenon, the New York Times has consistently listed many more men than women over the last five years.

So is the issue that notable women aren’t dying—or that newspapers aren’t reporting it? “We simply choose the most prominent, the most well-known, the most influential, without regard to race, color, sex, creed,” says Bill McDonald, the editor of obituaries at the Times. “It’s a rearview mirror. The people we write about largely shaped the world of the 1950s, ’60s and, increasingly, the ’70s, and those movers and shakers were—no surprise—predominantly white men.”

But legendary feminist activist Gloria Steinem says that doesn’t tell the whole story. “The standards by which people are chosen still have a ‘masculine’ skew,” Steinem wrote in an email to Mother Jones. Women who organized and pressured for social progress—like Mothers Against Drunk Driving, for example—are less likely to get notice, Steinem says, than men whose success can only be measured in wealth, like Donald Trump or the Koch Brothers. “Women are more likely to be credited with the personal than the political—and also put in one silo. Anything that only affects women is taken less seriously than anything that also affects men,” she says.

Here are some charts and graphs that illustrate the situation: 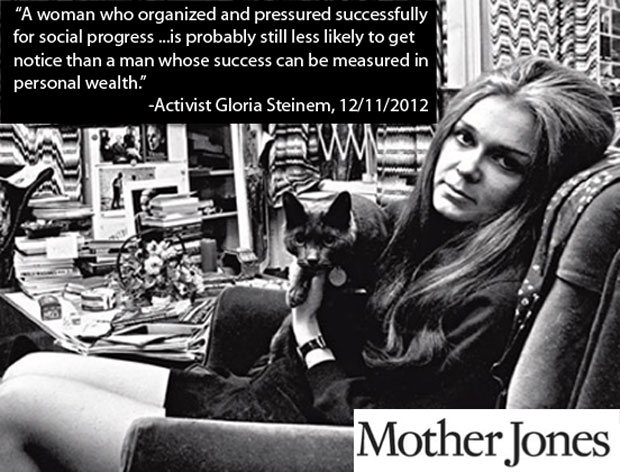 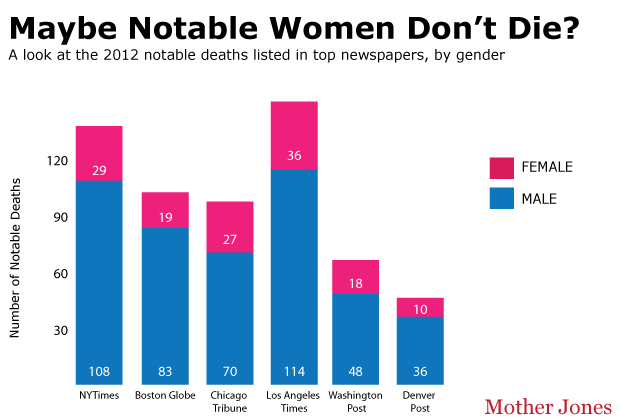 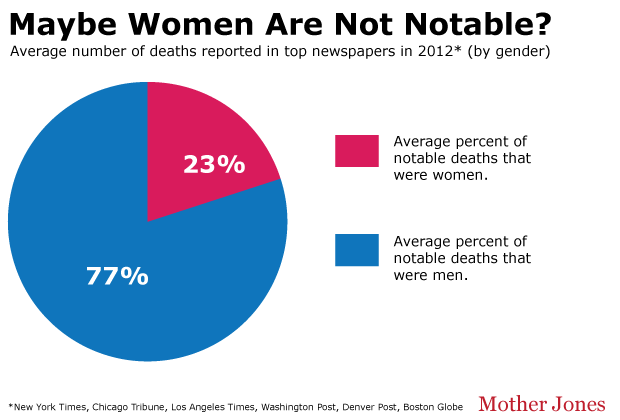 Lesley Kinzel, an associate editor at xoJane (the website run by Jane Pratt, founder of the cult feminist magazine Sassy) points out that “most of the women who are profiled on these lists (with a few noteworthy exceptions) were performers of some kind, and many were known for their beauty as well as their talent as entertainers. That’s fine, but it doesn’t exactly challenge the status quo.”

This year, the New York Times put four female authors on its notable death list, and 14 artists and musicians: 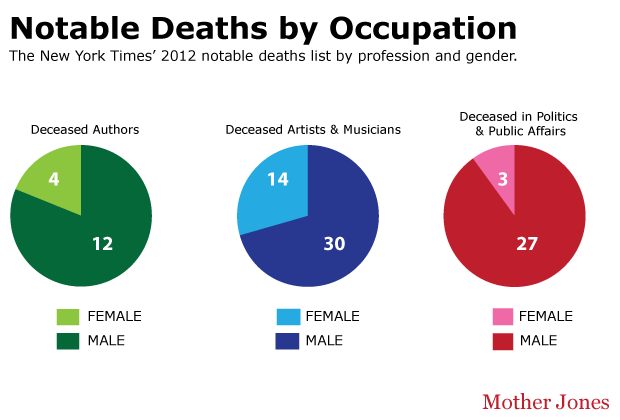 McDonald says that “were we to choose subjects based on demographics we’d be papering over the past, presenting a false picture.”

But putting the obituary gender gap down to “oh, it’s a generational thing,” can be “a convenient cop out,” Kinzel says. Doing so “lets these editors abdicate any responsibility for failing to do the legwork necessary to track down those women who maybe didn’t get the attention they deserved.”

Obituaries editors say that the percentage of women on their notable deaths lists will increase over time because women in more recent generations have had more opportunities to make an impact. “We’re already seeing that happen,” says the Times‘ McDonald. John Temple, a managing editor at the Washington Post, agrees that there will be “more women on the lists in the future.”

McDonald says he’s already seeing more women on the lists, but a graphical look at the last five years of New York Times notable death lists shows the number of women sometimes increasing, sometimes decreasing, while the number of men has skyrocketed, widening the gender gap.

I sent McDonald a version of the graph below, and he said that he was referring to day-to-day obituaries. “I haven’t done a count.”

Part of the problem is “the consciousness of the people decided what and who is newsworthy,” Steinem says. Or as Erin Belieu, a professor at Florida State University and cofounder of VIDA’s annual study on print byline inequality, puts it: “Wouldn’t it be much more meaningful if the lists included all those women who have been doing good work all their lives—often with little recognition?” 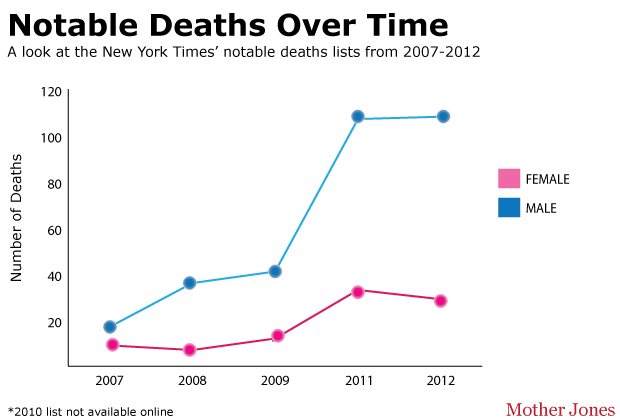