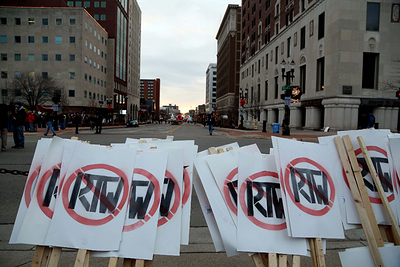 Many right-to-work protest signs wait for protesters to take them before the march to the state capitol in Lansing, Michigan. Eric Seals/MCT/ZUMAPRESS.com

The conservative group Americans for Prosperity is enticing supporters to rally at the Michigan state capitol in support of right-to-work legislation with $25 gas cards and free food and drinks, according to a staffer for the organization’s Michigan chapter.

AFP’s Michigan chapter also used gas cards and free lunches to lure supporters to a lobby day on December 6, the day GOP Gov. Rick Snyder and Republican lawmakers abruptly unveiled their right-to-work bills. Greg George, a government affairs associate with AFP-Michigan, says no one has taken the group up on its most recent gas card offer, but that the offer remains. “We’ve offered to gladly give them out,” he says. (Because it is a nonprofit organization, Americans for Prosperity, which is partially backed by the Koch brothers, does not publicly disclose its donors.)

Despite what its supporters claim, right-to-work legislation does not prevent so-called “forced unionization.” That’s because forced unionization is a myth: No worker can be forced to become a full-fledged union member. What right-to-work would do is ban unions from collecting dues from nonunion members for representing them with management. After all, nonunion members can benefit from contracts negotiated by unions. Right-to-work allows those nonmembers to receive union representation without paying for it—unions deride those folks “free-riders.” The result of right-to-work laws is that unions see their treasuries diminish and membership take a hit.

Michigan’s Republican-controlled legislature fast-tracked three pieces of right-to-work legislation last week that would allow nonunion members in workplaces in the public and private sectors to receive representation without paying any dues. The bills would likely deal a killer blow to the state’s unions. (Police and firefighters are exempt from the proposals.) Snyder’s public support for the legislation signaled a whiplash-worthy turnaround for the governor—he previously said right-to-work was not a priority, and tried to stand apart from the rest of the union-blasting class of 2010 governors like Wisconsin’s Scott Walker and Ohio’s John Kasich. Snyder is expected to sign the right-to-work legislation as early as Tuesday.

Just as AFP lured supporters to Lansing, unions bussed in members and supporters to protest the right-to-work bills, according to Chris Fleming, a spokesman for the American Federation for State, County, and Municipal Employees. A We Are Michigan spokesman adds that union allies are paying for their own lunches. Thousands of union members and supporters packed into the Michigan state capitol and the surrounding grounds to demand that Snyder veto the right-to-work bills.

AFP wanted the right-to-work fight. The group played a visible role in supporting other GOP governors pushing anti-union agendas in Wisconsin, Ohio, and elsewhere. Now AFP stands on the cusp of a major win in a cradle of organized labor. AFP-Michigan director Scott Hagerstrom said last week that passing right-to-work in the state would be “the shot heard round the world” in the battle against unions. “A victory over forced unionization in a union stronghold like Michigan,” Hagerstrom said, “would be an unprecedented win on par with Wisconsin that would pave the way for right to work in states across our nation.”