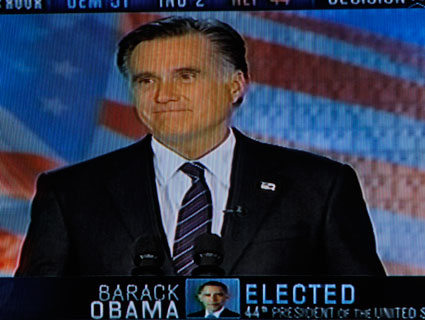 In September, top Pennsylvania Republicans shocked the nation by proposing a change to the state’s election rules that would have rigged the Electoral College in favor of Mitt Romney. Facing a nationwide backlash, the state’s GOP backed down—but not before Wisconsin Republicans considered a similar plan. With the old rules still in place, President Barack Obama won a 332-206 electoral college victory over Romney.

But now that Romney has been defeated, prominent GOPers are once again mulling rule changes that could make it harder for Democrats to win the White House—and easier for Republicans to claim Electoral College votes in states where they lose the popular vote.

Remember, the presidential election isn’t a nationwide contest, it’s a state-by-state fight, with each state worth a certain number of electoral votes (the District of Columbia gets 3, too). There are 538 electoral votes total; if you win 270 or more, you’re headed to the White House—even, as George W. Bush can assure you, if you don’t win the popular vote. The Constitution allows each state to allocate electoral votes however it wants, but in every state except for Nebraska and Maine, the contest is winner-take-all. If you get the most votes in Pennsylvania, you get all of its electoral votes.

Republicans want to change that. On December 3, Dominic Pileggi, the powerful Republican majority leader of the Pennsylvania state Senate, announced that he plans to introduce legislation that would change how the state allocates its electoral votes. This shouldn’t be a surprise: Pileggi was one of the Pennsylvania politicians behind the preelection plan to change Electoral College rules.

Before the election, Pileggi’s plan (backed by a mysterious dark-money group called All Votes Matter) was to allocate electoral votes by congressional district, with the winner of each district receiving one electoral vote and the statewide winner getting a two-electoral-vote bonus. That might not seem like a big deal. But Pennsylvania, like other blue states in the upper Midwest, was subjected to a very effective Republican gerrymander after the 2010 midterm elections. Republicans won 13 of its 18 districts in 2012, so if Pileggi’s preelection plan had been in effect, Obama could have been awarded as few as 7 of Pennsylvania’s 20 electoral votes, despite winning the state.

Pileggi’s postelection scheme has a new twist. Instead of awarding electoral votes by congressional district, it would award them in relation to the statewide popular vote, with a two-electoral-vote bonus for the winner. That would prevent blatantly undemocratic effects like a candidate losing a state’s popular vote but still winning its electoral votes. But it would still have a similar effect to Pileggi’s earlier idea—it would ensure that at least some of Pennsylvania’s 20 electoral votes, which have gone to Democrats in every election since 1992, would go to Republicans. In a close election, that could change the outcome.

Pileggi has said his new plan “much more accurately reflects the will of the voters in our state.” (He did not respond to a request for comment.) Dems say that misses the point. “The Republican Legislature has been brutally honest about wanting to move Pennsylvania into the Republican column,” says Daniel Roth, a spokesman for the Democratic Legislative Campaign Committee, which works to elect Dems to state legislatures. “They wouldn’t be doing this if Pennsylvania had gone Republican in the past six elections. This is clearly an attempt to move electoral votes to the Republican column because they know they cannot win the state.”

Roth has a point: The states where Republicans have proposed changing Electoral College rules—Pennsylvania and Wisconsin, where legislation has been introduced, and Michigan and Ohio, where activists have pushed the idea (see below)—went for Barack Obama in both 2008 and 2012. There are no such GOP proposals, for example, in deep-red Texas.

Jim Burn, the chair of the state Democratic party, called Pileggi’s plan “the ultimate sour grapes” in a statement posted to the party’s blog. “After getting swept in statewide elections, Pennsylvania Republicans are trying to change the rules to help Republican politicians…They are again trying to pass a bill that changes the rules simply to benefit Republican politicians who have been rejected by the majority of Pennsylvanians.”

Pileggi isn’t the only GOPer mulling a change to Electoral College rules after Obama’s victory. At a conference last month, John Husted, Ohio’s Republican secretary of state, said the state could make its elections less controversial by awarding its electoral votes by congressional district. Since Ohio, like Pennsylvania, has a congressional district map that was gerrymandered by Republicans, this idea, if in effect in 2012, would have handed the majority of the state’s electoral votes to Romney. But Husted, it seems, misjudged what would make Ohio elections less controversial—after national attention, he backed off his comment, saying he wasn’t “advocating” a change, just speaking theoretically.

At the National Review‘s influential blog The Corner, Rich Lowry was similarly cautious when mooting the idea of Electoral College changes that could boost Republicans’ hopes. “A friend sends along this e-mail. I post it, not as an endorsement but to encourage discussion,” Lowry wrote, introducing a long email endorsing awarding electoral votes by congressional district. “From a political perspective, we simply cannot allow the Democrats to have 220 electoral votes in the bag every single election,” Lowry’s friend wrote. “That’s the road to being a permanent minority party.” The solution? Change the rules.