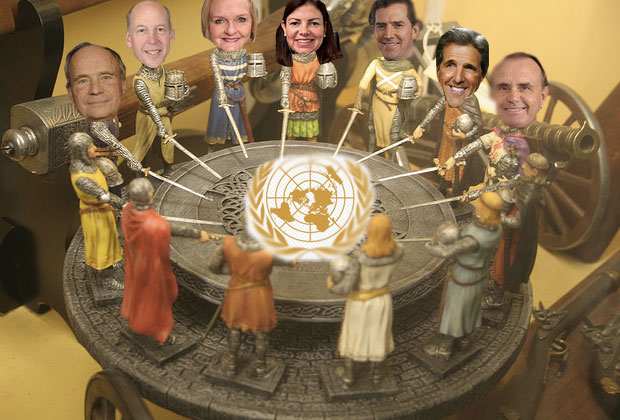 A couple of weeks ago, some conservatives were panicking that President Obama was going to use an executive order on cybersecurity to single-handedly take control of the internet. (Surprise: He wasn’t.) Now, a bipartisan group of lawmakers have banded together to stop the United Nations from pulling a similar stunt at this week’s World Conference on International Telecommunications in Dubai. But if you think this is just more fearmongering, think again: Some of their concerns appear legitimate.

Mobilization against the conference began after countries such as Russia and China submitted secret proposals (some have since been leaked) that would give the United Nations more regulatory power over the internet. A group of Arab countries is also advocating for universal identification of internet users. While the actual aim of the conference is to deal with issues like mobile roaming fees, cybersecurity, and expanding the internet into developing nations, with more than 900 regulatory proposals already submitted, there’s no saying what other ideas are out there.

Another issue potentially at stake is internet fees. According to the Associated Press, there are “European-backed suggestions to change the pay structure of the web to force content providers—such as Google, Facebook Inc. and others—to kick in an extra fee to reach users across borders.” While proponents of this idea say it will help developing countries pay for internet access, critics told the newswire that the proposal would mean that foreign countries could tax large content providers, like universities and search engines, who want to send content overseas.

The House and Senate have passed resolutions taking a stance against increased international regulation of the internet in advance of the conference. The resolutions garnered support from Democratic lawmakers, including Sen. Claire McCaskill (D-Mo.) and Sen. John Kerry (D-Mass.), who were concerned about the influence of less democratic countries on the treaty, and Republicans who shared their concerns (and were keen to join in on some good, old-fashioned United Nations bashing).

Rep. Charles Bass (R-N.H.) said such regulation could lead to “an engineering morass” and a “dark and dysmal spector for economic freedom.” Rep. Mary Bono Mack (R-Calif.), who introduced the House resolution aiming to “thwart takeover of internet by United Nations,” said that “if this power grab is successful…the internet becomes a wasteland of unfilled hopes, dreams and opportunities.” Although some of the language used to describe the United Nations “takeover” is bombastic, few think increased international regulation of the internet is a great idea.

Google, which has not made a peep about President Obama’s attempts to stop cyberattacks, is making some serious noise about the conference. The search giant started a petition against “some governments [that] want to use a closed-door meeting in December to increase censorship and regulate the Internet.” This is similar to the kind of action Google took during the uproar over the Stop Online Piracy Act. And Tim Berners-Lee, the inventor of the World Wide Web, is speaking up about his concerns that some conference attendees are going to “push for a UN agency to ‘run the internet’ rather than leaving it to groups already ‘doing a good job.'”

The good news for lawmakers and concerned companies is that the United States doesn’t have to sign whatever treaty comes out of the conference, and as the New York Times points out, “it is extremely unlikely that the administration of President Barack Obama, which has repeatedly pledged a commitment to an open Internet, would endorse a treaty that permitted a crackdown on Internet communications.” Secondly, the UN conference is consensus-based, so “by definition, that will weed out extreme proposals,” experts tell Politico.

Finally, the United Nations has said repeatedly it doesn’t want to take over the internet. “It’s unfortunate that the Congress is spending so much valuable time on something that isn’t even on the table,” Hamadoun Touré, secretary general of the International Telecommunications Union (a UN agency) told the Times in June. “There is no single reference to Internet governance in the preparation document.”