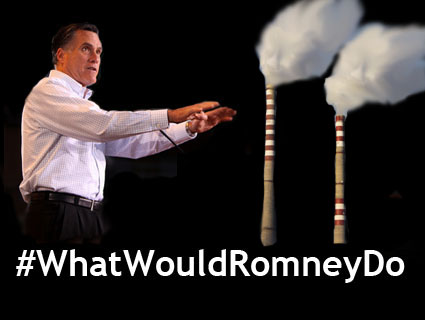 When it comes to the planet, it’s hard to get a great sense of what Mitt Romney would actually do as president. His campaign website includes a long list of issues—Puerto Rico, Medicare, Values—but environment doesn’t merit its own section. Anything on the subject is buried under energy, where he promises to make the US an “energy superpower” and calls the Obama administration’s green energy policies “nothing short of a disaster.”

1. States would oversee fossil fuel development on federal lands. Romney’s campaign has promised that as part of his plan to “dramatically increase domestic energy production,” states “will be empowered to control all forms of energy production on all lands within their borders, excluding only those that are specifically designated off-limits.” That could include some national parks.

2. Regulations would be weakened. Romney has pledged to “take a weed whacker” to federal environmental regulations. His plan lacks specifics, but calls for “streamlining” environmental review periods for energy development plans and “allowing state reviews to satisfy federal requirements.” (See Nos. 3 and 6 for more.)

3. Coal companies would get to do pretty much whatever they want. Romney has accused the Obama administration of waging a “war on coal,” and has pledged to reverse many of the administration’s regulations. As president, he would likely approve the most extreme anti-environmental bills offered in Congress—like the “Stop the War on Coal Act,” passed in September. The bill was a grab bag for coal interests, taking away the EPA’s ability to regulate mountaintop-removal coal mining, greenhouse gas emissions, coal ash disposal, mercury and air toxins.”I like coal,” Romney said at the October 3 debate. “I’m going to make sure we’re going to be able to burn clean coal.” However, he has offered few specifics on what he would do to make coal “clean” as president.

5. The Keystone XL pipeline will be approved. Romney has said he would approve this massive proposed pipeline running from Canada to Texas “on day one.”

6. Greenhouse gas emission regulations would be halted. Romney now treats climate change as a punchline, despite the fact that he at least pretended to care about it as governor of Massachusetts. Thus, he doesn’t see a reason that the EPA should be regulating carbon dioxide emissions at all. “I exhale carbon dioxide,” he joked at an event last November. “I don’t want those guys following me around with a meter to see if I’m breathing too hard.”

7. Say good-bye to new fuel-economy rules. Romney has pledged to throw out the new miles-per-gallon standards for cars and light trucks set by the Obama administration. “Gov. Romney opposes the extreme standards that President Obama has imposed, which will limit the choices available to American families,” according to his spokeswoman.

8. No more clean-energy loans. Romney has regularly attacked the Obama administration’s tax breaks and loans for the clean-energy industry, particularly the loan to now-bankrupt solar company Solyndra. He says he will end support for electric vehicle companies and clean-tech companies as president.