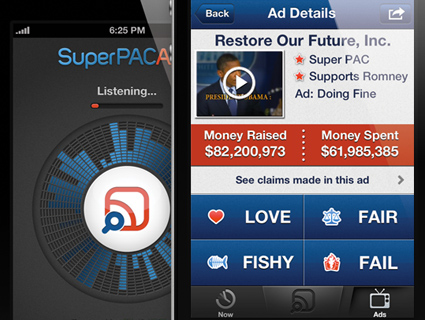 Thanks to several smartphone apps created just for the 2012 election, TV viewers could fact check attack ads from the comfort of their couches. One of these programs, the Super PAC App, allowed viewers to hold up their iPhones when a TV ad aired and—provided the phone could pick up the audio—get a report back with links to articles that addressed the ad’s claims and data about the group behind it. Viewers could also opine on the spot by selecting one of four ratings: fail, fair, fishy, or love.

Earlier this week, Glassy Media, the maker of the Super PAC App, uploaded the results of the more than 38,000 votes cast from its app. We dug into the data to determine the top vote-getters for each of the four ratings (as selected from the 40 ads that were tagged the most by app users):

Fail: “Join Our Fight to Repeal Obamacare”
Restore America’s Voice is a PAC that spent nearly $3.4 million against Democrats in 2012. None of that money is evident in this amateurish, low-budget ad, in which Mike Huckabee urges viewers demand the repeal of Obamacare. Of the 179 Super PAC App users who voted on the ad, 66 percent gave it a “fail.” The Super PAC App links to a CNN article that backs up the ad’s claim that Democrats introduced a $940 billion health care plan, but it also points to PolitiFact posts that dispute the claim that Obamacare will eventually cost $1.76 trillion and say Huckabee’s claim that Obamacare is the “largest tax increase in American history” is pants-on-fire false.

Fair: “Romney/Ryan Bromance: You Complete Me”
About 35 percent of the 360 viewers who voted on this ad from the liberal super-PAC American Bridge 21st Century thought it was fair. It features Mitt Romney repeatedly saying that his budget policy is identical to Paul Ryan’s. The Super PAC App links to articles that back up the ad’s implication that Romney incorporated his running mate’s idea to privatize Medicare into his campaign and shed a few details on Ryan’s budget plan. (American Bridge spent $8.7 million during the election.)

Fishy: “Failing American Workers”
The Super PAC App wasn’t foolproof: It still reports that “no specific claim [was] found in this ad,” a Romney campaign spot that claims that 582,000 manufacturing jobs have been lost under Obama and that the president failed on seven occasions to “stop China’s cheating.” But according to PolitiFact, the country has actually gained half a million manufacturing jobs under Obama. PolitiFact ranks the ad’s claim that Obama failed to stop China’s cheating as half true. Yet 24 percent of the 226 viewers who voted on this ad deemed it fishy.

Love: “Pants on Fire”
This ad from the Democratic Governors Association’s super-PAC, which spent $1.6 million on the election, juxtaposes clips of Republican governors allegedly lying about health care with a cartoon of Yosemite Sam inadvertently blowing himself up. The Super PAC App fact-checks Virginia Gov. Bob McDonnell’s pants-on-fire claim about a Medicaid mandate and Florida Gov. Rick Scott’s false assertion that Medicaid would cost his state $1.9 billion a year with the same PolitiFact articles that the ad cites. The app links to a different PolitiFact article in response to Sarah Palin’s death panel claim; this one doesn’t call it the “lie of the year,” but it still gives it a pants-on-fire rating. Viewers enjoyed the ad: Of the 155 who voted on it, 66 percent gave it a “love.”