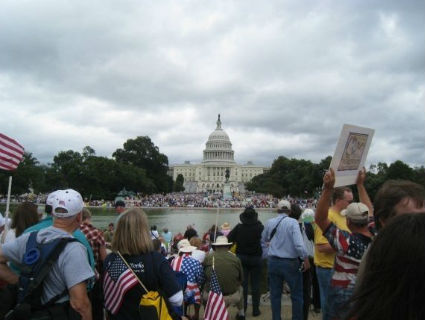 Here’s something both liberals and conservatives can agree on: Obama just paved his way to a second term by focusing on taxing the rich and portraying his rival as a heartless businessman more interested in preserving tax cuts than helping ordinary working families. This was the same strategy many of Romney’s primary rivals utilized, but Obama’s arguments resonated with the general public more than the GOP base.

Obama ignored vast swaths of his agenda, barely mentioning climate change or education reform, but by God did he hammer home the fact that his winning would bring higher taxes on the rich. He raised it so relentlessly that at times it seemed out of proportion even to me, and I wrote a book on the topic. But polls consistently showed the public was on his side.

The old adage is as true as ever: It’s the economy, stupid. And Republicans have not been so out of touch with the American electorate on economic issues since the disastrous Goldwater campaign. Paul Ryan’s economic agenda may have made him the darling of Fox News pundits and the Tea Party, but a solid majority of Americans saw it as class warfare directed squarely at the poor, elderly, and the middle class.

And yet even that demographic problem can be boiled down to economics. Here’s Chait again:

Numerous Republicans pointed last week to the party’s restrictionist immigration agenda as the source of its dismal performance with the growing (and increasingly Democratic) Latino bloc. But the party’s Latino problem does not rest with immigration law. Polls show that Hispanics are just plain liberal on the main role-of-government questions dividing the parties. More than three fifths want to leave Obamacare in place rather than repeal it; a mere 12 percent agree with the Republican position of closing the deficit entirely through spending cuts. The harsh truth that fend-for-yourself economic libertarianism is a worldview mainly confined to the shrinking, aging white electorate is a reality Republicans prefer not to acknowledge.

“The root of the party’s electoral challenge isn’t demographics,” he writes in Bloomberg. “It’s economics.”

While Republicans score poorly with young people, women, and Hispanics for a variety of reasons, it’s the GOP’s economic stance that unites all three demographics against Republican policies:

The common theme here is that the current Republican economic message isn’t very compelling to any of these groups. If Republicans addressed that problem, they would find their numbers improving in all of these groups, and outside them too. White, working-class voters, who supported Romney for president but seem to have had low turnout, might have shown up in greater numbers if Republicans had retooled on economics.

Ponnuru’s more moderate economic vision for the Republican party has placed him on the outskirts of the conservative movement, along with other fiscal and economic moderates like David Brooks and David Frum. One begins to wonder why this is—why exactly have economic issues become so hard-line on the right? In practice, fiscal conservatism almost always takes a back seat to social issues and defense. This was on garrish display during the presidency of George W. Bush, whose spending outpaced his Democratic predecessor’s and whose administration focused almost entirely on culture war issues and nation-building.

In fact, the failure of Bush’s eight long years in office combined with the economic collapse that accompanied his departure have set the stage perfectly for men like Paul Ryan, men whose actual records on fiscal policy don’t match their Randian ideology very well, but who nevertheless flourish with tough talk on deficits and debt.

But we shouldn’t chalk it all up to a reaction over the Bush years or the crash. There’s another force at play here that’s enormously skilled at playing to our most pervasive fears, whether those fears are of terrorists during the Bush years, or a shaky economy during Obama’s presidency.

The conservative media is largely responsible for the rise of the Tea Party. Pundits on Fox and CNBC and throughout the conservative blogosphere and think-tank intelligensia turned the Grover Norquist anti-tax pledge into a movement. Republican politicians have little choice but to play along or face a primary challenge from the right. The GOP’s hard-right turn on economic issues is a creature of circumstance. If instead of an economic downturn, Americans had faced some repeat of 9/11, the public discussion would be all about defense and patriotism. The Tea Party as we know it would never have materialized. In it’s place we’d have seen support-the-troops rallies and a concerted effort to paint Obama as a terrorist sympathizer and soft on foreign affairs. (Of course, we saw plenty of that also, but compared to the issues in the 2004 election, foreign policy played a minor role.)

As Chait and Ponnuru both point out, the economic agenda of the Republican Party is a loser. It can’t hope to capture the minority vote, the support of women, or a number of moderate independents. But it’s a winner for Fox News. Hardline economics and a new, even-more-conservative Tea Party candidate to challenge any Republican that doesn’t uphold the gospel of True Conservativism? Well, let’s just say that this makes for constant controversy and great television.

I’ve written previously that the Republican Party needs to ditch Fox News if they want to win. They’ll need to ditch Tea Party economics as well. The challenge for conservatives will be realizing that this economic agenda is simply fueling conservative media, not helping Republicans win back the voting public.