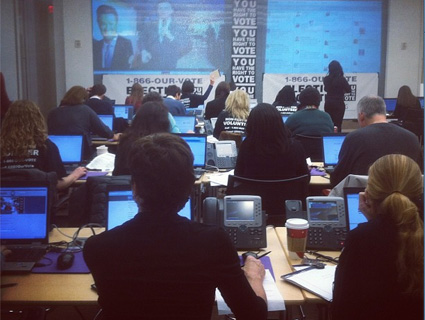 People all over the country are having trouble exercising their right to vote, the Lawyer’s Committee for Civil Rights said Tuesday morning.

“We are seeing a manifestation of a new Jim Crow in America…I don’t think that’s an overstatement,” said Wade Henderson, who runs the Leadership Conference on Civil Rights (a different group from the Lawyer’s Committee). “You are seeing lines longer than those in Baghdad or Kabul.”

To combat poll problems, the Lawyer’s Committee has teamed with half a dozen other civil rights and voting rights groups to operate an election protection hotline, 1-866-OUR-VOTE. Dozens of volunteers with legal backgrounds are taking calls from voters encountering obstacles to casting a ballot. The Lawyer’s Committee for Civil Rights says it fielded thousands of calls Tuesday morning from voters who were turned away from the polls because they lacked photo ID, voters facing polling places with inadequate staff and equipment, and voters whose polling stations opening late.

Despite these ominous reports, Nicole Austin-Hillery of the Brennan Center for Justice struck an optimistic note. “The system is working for the vast majority of Americans,” she said.

Voting problems are particularly acute in some key states, according to the Lawyer’s Committee’s Barbara Arnwine. In Pennsylvania, she said, voters are showing up to polling stations and seeing signs that say photo ID is required to vote, when state law says it’s only necessary for first-time voters. Some voters, Arnwine said, are being turned away by poll workers who mistakenly believe that all voters need government-issued photo ID to cast a ballot.

“This is the fault of the Pennsylvania state government, we lay it at their foot that voters are having problems in that state,” Arnwine said at a press conference held Tuesday morning. “The state of Pennsylvania ought to be ashamed.” Pennsylvania passed a voter ID law, but the court blocked it from being enforced for this election. The judge ruled that poll workers could ask for ID, but voters will still be allowed to cast regular—rather than provisional—ballots even if they can’t provide one. A judge in Pennsylvania ordered Republicans outside a polling place in Allegheny to stop demanding ID from voters outside the polls.

Pennsylvania isn’t the only state facing problems. The Lawyer’s Committee has received calls from Ohio saying that voting machines in Dayton, Toledo, and Cleveland are non-functional. Some voters in Ohio complained of regular ballots being placed in provisional ballot boxes—provisional ballots are less likely to be counted. At one polling station in Milwaukee, Wisconsin, Arnwine said, 300 voters were standing in line to vote because only one voting machine was working, while other polling stations were critically understaffed. The voting situation in New Jersey, which is still reeling from Hurricane Sandy, Arnwine said, was a “catastrophe.”