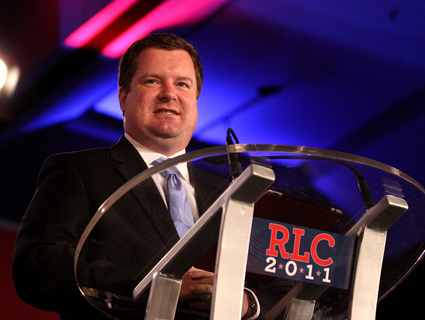 Update: On Friday morning Erickson announced that he had decided not to challenge Chambliss. As he explained: “Were I to run for the Senate, it would be a terribly nasty campaign. It’d actually be really awesome, but it’d be really nasty. I have a seven year old, a soon to be four year old, and a wife who does not like being anywhere near a stage. I’m not putting my family through that when the best outcome would mean a sizable pay cut in pay and being away from my kids and wife all the time huddled in a pit vipers often surrounded by too many who viewed me as a useful instrument to their own advancement.” But, he added, Chambliss shouldn’t rest easy: “We will find someone to catapult into the arena.”

Erick Erickson has the itch. After years of backing conservative primary challenges to moderate GOPers, the RedState founder and CNN contributor is mulling a primary challenge of his own. He’s thinking of taking on Sen. Saxby Chambliss, the Georgia Republican who last weekend took the occasion of the fiscal cliff debate to publicly criticize anti-tax activist Grover Norquist. “Saxby Chambliss is waffling around like a dog off its leash for the first time,” Erickson wrote in a post for RedState on Tuesday, before speculating that “[a] conservative from metro-Atlanta could put Saxby Chambliss in peril and we should work to make that happen.” By then, he was telling his radio show listeners that he just might be the man for the job: “I’ve been very adamant, I wasn’t going to do it, but after a few conversations today with a few heavy hitters in Washington, D.C. and some here in Georgia, I should at least consider it.”

From his perch at RedState, Erickson has scored a few big wins in his plan to make the Republican Party walk and talk a bit more like Erick Erickson. He beat the drum early on Marco Rubio, back when then-Gov. Charlie Crist was the toast of the Republican establishment. He backed Ted Cruz for Senate when the former Texas solicitor general was flailing in the polls.

But he’s chosen jesters as often as he’s picked kings—and it’s cost the Republican party dearly. He endorsed Sharron Angle in Nevada. He was among the first prominent conservatives to back Richard Mourdock‘s campaign against Sen. Richard Lugar. He backed Christine O’Donnell in her primary against former Rep. Mike Castle.

The only way Republicans could possibly stand any chance of losing a Senate seat in Georgia in 2014 is if they they nominated someone with a history of degrading comments about women and inflammatory views on abortion. That is, someone like Erick Erickson.

At some point soon, it will happen. It’ll be over an innocuous issue. But the rage is building. It’s not a partisan issue. There is bipartisan angst at out of control government made worse by dumb bans like this and unintended consequences like AIG’s bonus problems.

If the GOP plays its cards right, it will have a winning issue in 2010. But it is going to have to get back to “leave me the hell alone” style federalism where the national government recedes and the people themselves will have to fight to take their states back from special interests out of touch with body politic as a whole.

Were I in Washington State, I’d be cleaning my gun right about now waiting to protect my property from the coming riots or the government apparatchiks coming to enforce nonsensical legislation.

I’m not filling out this form. I dare them to try and come throw me in jail. I dare them to. Pull out my wife’s shotgun and see how that little ACS twerp likes being scared at the door. They’re not going on my property. They can’t do that. They don’t have the legal right, and yet they’re trying.”

On the plus side for Georgia Republicans, at least Herman Cain’s not running.