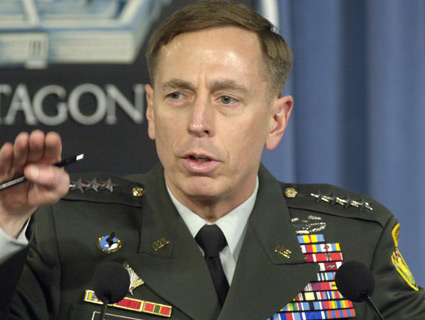 On Friday afternoon, four-star general and CIA director David Petraeus resigned, saying he had cheated on his wife of 38 years. Petraeus was widely respected for his involvment in managing the later years of the Iraq War, earning the beltway nickname of “King David,” among others. More recently, he has been under fire for this year’s Benghazi embassy attack controversy.

Sources tell NBC News that deputy CIA director Mike Morrell would likely be asked to assume the role as acting director, with the possibility of making the promotion more long-term. Petraeus became director of the CIA in September 2011 after his appointment by President Obama.

Yesterday afternoon, I went to the White House and asked the President to be allowed, for personal reasons, to resign from my position as D/CIA.  After being married for over 37 years, I showed extremely poor judgment by engaging in an extramarital affair.  Such behavior is unacceptable, both as a husband and as the leader of an organization such as ours.  This afternoon, the President graciously accepted my resignation.

As I depart Langley, I want you to know that it has been the greatest of privileges to have served with you, the officers of our Nation’s Silent Service, a work force that is truly exceptional in every regard.  Indeed, you did extraordinary work on a host of critical missions during my time as director, and I am deeply grateful to you for that.

Teddy Roosevelt once observed that life’s greatest gift is the opportunity to work hard at work worth doing.  I will always treasure my opportunity to have done that with you and I will always regret the circumstances that brought that work with you to an end.
Thank you for your extraordinary service to our country, and best wishes for continued success in the important endeavors that lie ahead for our country and our Agency.

Here’s the statement by Director of National Intelligence James Clapper:

DNI STATEMENT ON THE RESIGNATION OF CIA DIRECTOR DAVID PETRAEUS:

Today, CIA Director David Petraeus submitted his letter of resignation to the President. Dave’s decision to step down represents the loss of one of our nation’s most respected public servants. From his long, illustrious Army career to his leadership at the helm of CIA, Dave has redefined what it means to serve and sacrifice for one’s country.

Since he took over as Director in September of last year, he and I have worked together to tackle some of the most challenging issues faced by the Intelligence Community in more than a decade. Under his leadership, the CIA remained instrumental in providing our policy makers decision advantage through the best possible intelligence. I’m particularly thankful for Dave’s unwavering support and personal commitment to my efforts to lead the Intelligence Community and integrate our intelligence enterprise.

Whether he was in uniform leading our nation’s troops in Iraq and Afghanistan, or at CIA headquarters leading the effort to generate intelligence used to keep our nation safe, Dave inspired people who had the privilege of working with him.

I have spent more than five decades serving our country–in uniform and out–and of all the exceptional men and women I have worked with over the years, I can honestly say that Dave Petraeus stands out as one of our nation’s great patriots.

On behalf of the entire Intelligence Community, I thank Dave for his service, his support and his continued friendship.

And here is the White House:

David Petraeus has provided extraordinary service to the United States for decades. By any measure, he was one of the outstanding General officers of his generation, helping our military adapt to new challenges, and leading our men and women in uniform through a remarkable period of service in Iraq and Afghanistan, where he helped our nation put those wars on a path to a responsible end. As Director of the Central Intelligence Agency, he has continued to serve with characteristic intellectual rigor, dedication, and patriotism. By any measure, through his lifetime of service David Petraeus has made our country safer and stronger.

Today, I accepted his resignation as Director of the Central Intelligence Agency. I am completely confident that the CIA will continue to thrive and carry out its essential mission, and I have the utmost confidence in Acting Director Michael Morell and the men and women of the CIA who work every day to keep our nation safe. Going forward, my thoughts and prayers are with Dave and Holly Petraeus, who has done so much to help military families through her own work. I wish them the very best at this difficult time.