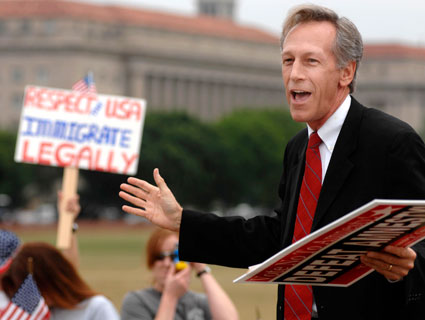 Midway through our interview, Virgil Goode makes me a promise about the oath of office. “I can tell you if I’m elected president it won’t be on the Koran and it won’t be on the Book of Mormon,” he says, speaking by phone from his campaign office in his hometown of Rocky Mount, Virginia. “It’ll be on the Bible.”

At this point, Goode, a former six-term Democrat-turned-Independent-turned Republican congressman who’s running as the Constitution Party nominee, stands about as much of a chance of taking the oath of office next January as he does of converting to Scientology. But that’s not why he’s caught the attention of political observers. With his deep roots and Baptist mores, the thinking goes, he could swing just enough disgruntled social conservatives to hand Virginia to the Democrats in November.

The idea has found traction. A July poll from Public Policy Polling put him at 9 percent among likely voters in the state. “Could Virgil Goode Win Virginia for Obama?” asked ABC News. “Virginia Ex-Congressman Could Cost Romney the Election,” answered the Daily Beast. The Washington Examiner, channeling the spoilers of elections past, warned, “Goode could be Republican Mitt Romney’s Ralph Nader in Virginia.”

But with the election 37 days out, Goode doesn’t seem to have gotten the memo. Unlike Ralph Nader, who had an army of disaffected lefty activists and a handful of hot-button issues to make wedges of, he has just two full-time staffers and two part-timers. By capping contributions to his campaign at just $200, he’ll be hard-pressed to hire many more. His campaign schedule is light; when I asked him for a list of upcoming campaign appearances, he could think of just one TV interview and a visit to a North Carolina antique festival. Instead of focusing like a laser on the Old Dominion, he’s plotting a trip through the Deep South and another to Florida.

Much of his time is consumed by the fight to get himself on the ballot—a battle that is complicated by the fact that he can barely afford lawyers. “You’ve got to file the papers; you’ve got to get the signatures,” Goode says, his thick drawl morphing the last word into sig-na-tours. “I know in Tennessee we started out being 36 sig-na-tours short, and then we got it down to 9 and then on the day for ballot certification they certified us. And now in Arkansas we missed being on the ballot by 96 sig-na-tours, so we’re not on the ballot in Arkansas. It’s like that in every state. We got on the ballot in New York. But in Pennsylvania the Republicans sued and it got to the point where if you lost, you’re probably looking at $150,000 in legal fees, so we didn’t want to chance that.”

And then there’s Virginia, where Republicans fought tooth and nail to keep him off the ballot. In September, a judge ruled that his signatures were valid, but the Romney campaign promptly challenged him. “They hired McGuireWoods law firm to go over every sheet of paper we filed with the state board of elections,” he says. It wasn’t until late last month that Attorney General Ken Cuccinelli, a Romney supporter, announced that Goode would appear on the ballot after all. (He could have done worse: Rick Perry, Rick Santorum, and Newt Gingrich all failed to collect enough signatures to make it onto the Virginia primary ballot.)

Goode has mellowed some, since he left Congress. He sounds positively kumbaya since his moment of infamy six years ago, when he criticized the nation’s first Muslim member of Congress, Rep. Keith Ellison (D-Minn.), for taking the oath of office on Thomas Jefferson’s copy of the Koran. He still doubts President Obama is a Christian—or an American citizen for that matter—but he’s content to let it be.

He’s also reinvented himself as a campaign finance crusader. His proposal goes even further than those offered up by former Louisiana Gov. Buddy Roemer, who made dark money the focus of his aborted long-shot campaign last spring. “You shouldn’t have political action committees,” Goode says, calling for an end to all outside organizations, even those like the Sierra Club PAC that limit contributions to $5,000, and an end to corporate giving. He’d support a constitutional amendment to overturn Citizens United, but if he was picking Supreme Court justices, that wouldn’t even necessary. “You could probably do a statutory interpretation of the First Amendment and say, ‘Thus, thus, thus, and thus,'” he explains. “But I think a constitutional amendment on that would pass even though you’d have a lot of heavy hitters on both sides objecting to it.”

What’s really got his goat is immigration. Goode is as close to a single-issue candidate as you can find. He wants to halt legal immigration entirely by putting an “almost complete moratorium” on green cards and ending diversity visas, and squeeze undocumented immigrants out of the country by banning their kids from attending public schools.

“Romney said during the Republican presidential debate that he loved immigration,” Goode says. “I do not love immigration. I think immigration has been harmful to the United States. I think it’s brought more persons more dependent on the government into this country. And if Romney wanted to decrease the 47 percent, he’d be adopting my positions on immigration instead of being a clown and opposing my positions.”

“I just wish that more people would be welcoming to dogs and cats so they didn’t have so many that got killed.”

He adds, “And of course Obama, I’m sure he’s opposed to my positions too. He probably wants more of whatever the 47 percent is!”

Before Goode hangs up, there’s one more thing I have to ask him about. On his website, along with the requisite digs at undocumented immigrants and out-of-control spending, Goode makes a pitch for the pugs:

Dog Lovers should take a look at Lucy and Virgil Goode who have been fostering dogs for some time. Pictured are five dogs that had health problems and are now permanent residents in the Goode household. Penelope needs twice a week treatments for her kidney problem and Teddy is on seizure medication. The other three were rescues from the local pound and have gotten over their health issues. When Goode is elected President, these dogs and a few cats will be moving to 1600 Pennsylvania Avenue.

Was Virgil Goode—Virgil Goode!—hoping to use Romney’s mistreatment of his Irish setter, Seamus, as a political wedge?

“I guess you could say there is a contrast again between Romney and myself and Obama,” Goode says. But then he decides to take the high road.

“I don’t want to say that. If they’ve got dogs, I’m glad they’ve got dogs. I just wish that more people would be welcoming to dogs and cats so they didn’t have so many that got killed and had to be thrown in a landfill.”

And that, at least, is something Virgil Goode might actually be able to get voters to agree on.