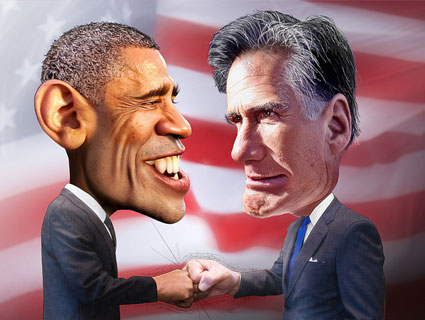 There’s a wonderful old American postcard tradition of gigantism, a mixture of (and gentle mocking of) a national, but especially Western, urge toward bravado, braggadocio, and pride when it comes to this country. The imagery on those cards once ranged from giant navel oranges on railroad flatcars to saddled jackalopes (rabbits with antlers) mounted by cowboy riders on the range. Think of the 2012 election season as just such a postcard—without the charm.

Though no one’s bothered to say it, the most striking aspect of this election is its gigantism. American politics is being supersized. Everything—everything—is bigger. There are now scores of super PACs and “social welfare” organizations, hundreds of focus groups, thousands upon thousands of polls, hundreds of thousands of TV ads, copious multi-million dollar contributions to the dark side by the .001%, billions of ad dollars flooding the media, up to $3 billion pouring into the coffers of political consultants, and oh yes, though it’s seldom mentioned, trillions of words.

It’s as if no one can stop talking about what might otherwise be one of the least energizing elections in recent history: the most vulnerable president in memory versus a candidate who somehow threatens not to beat him, two men about as inspired as a couple of old beanbag chairs. And yet the words about the thrill of it all just keep on pouring out. They stagger (or perhaps stun) the imagination. They are almost all horse race- and performance-oriented. Who is ahead and why? Who is preparing for what and how? Who has the most momentary of advantages and why? Who looked better, talked tougher, or out-maneuvered whom?

It never seems to end, and why should it? After all, it’s the profit-center of the ages, pure money on a stick. And there’s just so much to say about what is surely an event for the record books. The only question (and it’s not one to be taken lightly) is: What is it?

It started earlier and lasted longer than any election in our history, and every number associated with it is bigger and better and more striking than the last. If you happen to have the TV on, every one of its moments is The Moment. I even heard one prime-time news anchor call the vice-presidential head-to-head “an epic generational debate.”

Such hyperbole is the daily norm. Before the first presidential debate, another TV talking head assured his audience, “the Republicans were crawling out onto the 33rd floor ledge looking into the abyss.” Then, for a while, that abyss belonged to Barack Obama and he was falling, falling, falling.

That was, of course, before the second of the three presidential debates, which arrived with enough fanfare to put the Thrilla in Manila or the Rumble in the Jungle to shame. It was, according to the logos I jotted down, “The Showdown,” “The Rematch,” “The Comeback,” or simply “High Stakes”—but what wasn’t in this election season? Of course, Romney and Obama weren’t doing something as mundane as simply debating each other for an hour and a half. They were preparing to head “into the arena” to demonstrate “the power of one night,” and not just any night but “the most crucial single night of the campaign.” All of this to be followed, of course, by debate number three (“The Last Face-Off,” “The Final Showdown”).

Everything about this year was, in fact, crucial and record-making, including the 73,000 (mainly attack) ads that saturated Las Vegas by October 12th, making it “the place with the most televised campaign advertisements in a single year.” (Cleveland came in second and Denver third.) And talk about obesity: for the two campaigns, which long ago busted out of their public-financing election togs, the sky’s now the limit on contributions and there’s no place in the country, however faintly competitive, at which dollars can’t be thrown.

That blitz of money—more than $3 billion for TV ads alone—should stagger the imagination, as should the nearly billion dollars each that the Obama and Romney crews have already raised. Then there are the multimillions pouring into mainly Republican Super PACs; the $10 million that casino magnate Sheldon Adelson and his wife Miriam gave in June to the Romney Super PAC Restore Our Future, and the $24.2 million that has followed—with Adelson reportedly pledging another $65 million, if necessary, to get Obama out of the White House; and the multi-millions the billionaire Koch brothers have poured into Americans for Prosperity. That organization, in turn, is funneling $6 million into anti-Obama attack ads every two weeks and has even set up its own “ground game”—200 permanent staff members in 32 states, and thousands of volunteers armed with “sophisticated online micro-targeting tools.” All of this, of course, gives the phrase “money politics” new meaning.

And then there’s TV. Keep in mind that prime-time audiences were radically down this spring: CBS lost 8% of its audience, Fox 20%, and ABC 21%. What luck, then, that billions of ad dollars and eyeball-gluing programming have been flowing into the same medium as part of that heavily over-promoted reality show “Mitt v. Barack” (only one will remain standing!). It’s been an ongoing vote-’em-outta-there show that, as in the second presidential debate, has proven capable of capturing an audience of 65.6 million across the channels, the sort of numbers that stomp the Oscars and are beaten only by a few previous presidential debates and Super Bowls.

So if you own some media outfit, from the first spring Republican debates on, politics has been a never-ending Christmas. It should surprise no one, then, that the employees of those media bosses have supersized the way they are plugging election 2012. (In one of the stranger phenomena of our election moment, however, this obvious conflict of interest is never discussed, even if its reality is daily before our eyes.)

So forget the profits involved. Just sit back and enjoy an election for the ages. Only one thing could possibly be bigger: election 2016—and the media isn’t even waiting for November 7th to begin handicapping that race. Articles about whether or not Billary is running are already commonplace. (Hillary’s denied it. Bill’s left the door ajar. Just about everybody suspects that, in the end, the answer could be yes.)

In the meantime, what a learning experience this election is proving to be. Who doesn’t now know about the significance of “the suburban woman,” or the “Walmart mom,” or what a “four-point swing” is, or an “outlier poll,” or a campaign “prebuttal” (a preemptive response to arguments not yet made), or how to judge Gallup’s handiwork? Who couldn’t go on and on about campaign 2012? Which, in fact, is just what’s happening.

An Election That Outgrew Us All

Still, amid all the hoopla, money, and analysis, what exactly is it? I mean this thing we still call an “election,” in which our temperatures are taken every 30 seconds, in which we are told that we have more or less voted every day for months on end, in which to keep up with events you need to read daily columns by a man who lives only to make sense of this morning’s batch of polls.

What is to be made of a phenomenon that seems to be outgrowing us all, and every explanation we have for what it is? Yes, thanks only in part to the Supreme Court, this is distinctly a 1% election, but that hardly encompasses it. Yes, corporations and lobbyists are pouring their everything into it, but that can’t really explain it all either. Yes, it’s a profit center for media owners, but no one would claim that catches the essence of it. Yes, it’s an entertainment spectacle, but is that really how you’d define it? And certainly it’s an everything-the-market-can-bear version of an election campaign, but does that encompass it either?

It’s certainly not your grandparents’ election, and you may not understand it any better than I do. But if you’ve been worried about Big Government, why haven’t you been worrying about Big Election, too?

The fact is: sometimes things outgrow all of us, even those who think they control them.

And here, to me, is the strangest thing: for all the trillions of words devoted to campaign 2012, no one even bothers to discuss its size. Americans may be willing to argue copiously about whether New York’s Mayor Bloomberg should control the supersizing of soft drinks in his city, but not a peep is heard when it comes to the supersizing of the run for the presidency.

Under the circumstances, the slogan of ABC News seems either touchingly or mockingly silly: “Your Voice, Your Vote.” Whatever this thing may be, it certainly has ever less to do with your individual voice or your individual vote. As Big Election becomes a way of life, democracy—small “d”—increasingly seems like a term from a lost time. If this is democracy, it’s on steroids and on the Comedy Channel. It’s our own Democratic Mockpocalypse.

I’d be the last person to claim I understand it. Still, I do know one thing: whatever it is, we’re evidently going to pass right through this endless political season without stopping to take stock of our supersized political world.

Tom Engelhardt, co-founder of the American Empire Project and author of The United States of Fear as well as The End of Victory Culture, his history of the Cold War, runs the Nation Institute’s TomDispatch.com. His latest book, co-authored with Nick Turse, is Terminator Planet: The First History of Drone Warfare, 2001-2050.To stay on top of important articles like these, sign up to receive the latest updates from TomDispatch.com here.