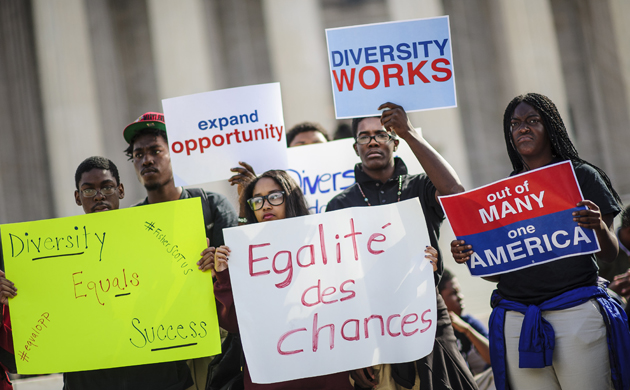 Three white lawyers argued before a mostly white Supreme Court on Wednesday about whether the University of Texas-Austin’s admissions process—designed to diversify its student body—discriminated against a white applicant.

Abigail Fisher, the 22-year-old who says she was denied the education she wanted because she is white, wouldn’t have gotten in anyway—her grades and scores weren’t good enough, at least according to UT. Fisher graduated from Louisiana State University earlier this year, but she still wants her UT application fee back because, her attorney argued, her rights were violated by a process that saw her as a racial category rather than a human being. Fisher’s tale doesn’t exactly have the gravity of Linda Brown walking a mile out of her way to attend school because the state of Kansas saw black people as racially inferior to white people, but for some critics of affirmative action it’s almost the same thing. After all, half of white people in the United States see racism against whites as just as much of a problem as racism against minorities.

Although affirmative action in higher education may not seem like the world’s most pressing issue, it still provokes strong feelings in a country where the president is black, the population is becoming less white, and economic hardship makes competition for an elite education fierce. The folks in the black robes have a lot of feelings about the policy, perhaps none more so than Chief Justice John Roberts, who ruled in one of his first Supreme Court decisions that race-conscious public school desegregation programs are unconstitutional. (Everyone remembers Roberts pithily writing that “the way to stop discriminating on the basis of race is to stop discriminating on the basis of race.”)

For Roberts, it’s not even that the cure for racism is almost as bad as the disease. The cure is the disease. Take Roberts’ logic to its natural conclusion—that government should almost never pay attention to race at all—and even something like the Voting Rights Act, which to this day prevents states from denying Americans the right to vote, could be overturned by the court. Conservatives are eager for the chance.

Roberts isn’t the only justice with an interest in this case. Every Justice on the Supreme Court went to an Ivy League School, so debates about preferential admissions to elite schools hit close to home. Clarence Thomas thinks affirmative action means his Yale law degree is only worth “15 cents.” His conservative colleague Samuel Alito might agree. After graduating from Princeton, Alito was part of an alumni group, disavowed during his confirmation hearings, that aimed to keep students like Sonya Sotomayor, who once called herself “the perfect affirmative action baby,” off campus. Sotomayor is not the only affirmative action baby among the nine: Ronald Reagan nominated Antonin Scalia because he thought there ought to be an Italian-American justice. When it comes to counting votes, though, there are more Thomases than Sotomayors on this court.

“There are easily four votes on the court for the idea that race-consciousness is unconstitutional,” says Guy-Uriel Charles, a law professor at Duke University. That doesn’t include Anthony Kennedy, who, as UCLA law professor Adam Winkler points out, has “voted to invalidate every race-based affirmative action policy that’s come before the justices during his tenure,” despite conceding that race can sometimes be used “as a last resort” to achieve diversity. With Justice Elena Kagan having recused herself, it’s Kennedy’s call whether a lower court’s ruling upholding UT’s policy stands or affirmative action is curtailed even further. He didn’t sound like he was in the mood to cut UT any slack. “What you’re saying is that what counts is race above all,” Kennedy told Gregory G. Garre, the attorney defending UT’s policy.

Absent a truly sweeping Citizens United-style ruling wiping away decades of prior precedent, affirmative action is likely to survive in some form—allowing some very small use of race in admissions, and only under very specific circumstances. But colleges and universities, including UT, have already tried “race-neutral” methods for seeking diversity. Between 1996 and 2003, UT relied on Texas’ “Top Ten Percent” law, in which students from the top ten percent of their class in high schools in the state were guaranteed admission to state schools in Texas. That policy, which accounts for three quarters of the students admitted to the UT, actually produced more diversity than the policy it replaced, at least partly because of demographic changes in the state. But after the justices ruled in 2003’s Grutter v. Bollinger that schools could deploy a “narrowly tailored’ use of race in admissions, UT Austin started adding race-consciousness back into the mix as part of a “holistic” evaluation of the small number of applicants not already guaranteed admission.

Richard Kahlenberg, a senior fellow at the Century Foundation, doesn’t like UT Austin’s reasoning for returning to race-conscious admissions. Kahlenberg, who mocks the policy as “we want to bring together rich kids of all colors,” tells Mother Jones “it’s not going after real socioeconomic, racial, and ethnic diversity.” Top Ten Percent works, he says, and other colleges should try similar methods that are race-conscious in conception but race-neutral in application.

The problem is that the Top Ten Percent method relies in part on lingering racial and economic segregation to be effective. A less qualified black candidate who attends a lower-performing school could qualify for admission under the policy where a more qualified black student who goes to a high-performing school would not. Critics of Top Ten Percent don’t like its reliance on economic and social segregation to create diversity. “The only way it works is if you have heavily separated schools,” Justice Ruth Bader Ginsburg said to Rein. “So maybe the University is concerned that that is an inadequate way to deal with it.”

Only one side speaks of “level playing fields” now, and it’s the one that wants to see affirmative action torn down like the Berlin Wall.

Whatever the justices decide, the moral reasoning for affirmative action has long been divorced from its legal basis, which has been twisted over time to ensure the policy’s survival. President Lyndon Johnson declared in his 1965 commencement speech at Howard University that “we seek not just legal equity but human ability, not just equality as a right and a theory but equality as a fact and equality as a result.” Johnson saw affirmative action as a way to even the playing field after years of state-backed racism. (UT Austin banned blacks for more than half of its history.) These days, colleges are only allowed to seek diversity because it supposedly helps students learn better. Supporters of affirmative action don’t want to admit that acknowledging race means students like Fisher might get passed over, while many opponents simply don’t care if higher education isn’t racially diverse or acknowledge the role that racism against minorities continues to play in American life. Only one side speaks of “level playing fields” now, and it’s the one that wants to see affirmative action torn down like the Berlin Wall.

Fortunately, as far as affirmative action is concerned, policies like the Top Ten Percent plan, even with its flaws, augur the possibility of “race-neutral” policies that might be able to achieve results similar to affirmative action while avoiding conservative legal challenges. But even the Top Ten Percent plan is “race conscious” in the sense that it acknowledges a need to rectify racial inequality. Over the past few decades, diversity has become an American cultural value, one that even the right tries to showcase when it can. Now it’s Roberts’ faith in the need for “colorblindness”—the idea that we’ve come so far that acknowledging race is itself racism—that threatens the gains we’ve already made.