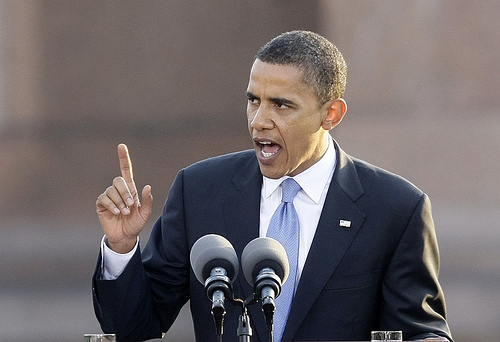 Veteran politicos and journalists who’ve done a few tours on the campaign trail like to say that, in a tight race, you shouldn’t put much faith in national presidential polls. It’s the state-level polls, especially those in the handful of fiercely fought battleground states, that really matter.

By that measure, President Obama has opened up a sizable lead over Mitt Romney with five weeks until Election Day. According to a new ABC News/Washington Post poll, Obama leads Romney 52 percent to 41 percent among likely voters in swing states, which include Ohio, Florida, North Carolina, and Virginia. Nationwide, 49 percent of likely voters say they’d vote for Obama in November, while 47 percent said the same for Romney.

Obama’s swing state advantage in this latest poll doesn’t appear to be a fluke. Last week, Quinnipiac University/New York Times/CBS News polls showed Obama ahead by 10 points in Ohio and nine in Florida. RealClearPolitics‘ polling averages in the top nine swing states show Obama ahead in all of them, albeit by single-digit margins.

These latest swing state polls suggest that Romney’s path to 270 electoral college votes is slimmer than ever. Romney needs to win the bulk of the top nine swing states—Florida, Ohio, North Carolina, Iowa, New Hampshire, Virginia, Colorado, Wisconsin, and Nevada—to have a shot at prevailing on November 6.

Obama’s lead could be a result of his campaign’s advertising and ground-game advantage in those key states. According to a recent Wesleyan Media Project analysis, Obama’s campaign and his Democratic allies out-advertised Romney and various GOP groups by more than 2-to-1 between late August and early September, running 40,000 broadcast and cable ads compared to Romney and the GOP’s 18,000. That disparity is evident in battleground states. Between April and early September, Democrats ran more ads in Las Vegas, Cleveland, Denver, Orlando, Reno, Norfolk, Tampa, and Richmond—all major media markets in swing states—according to Wesleyan.

Here’s more from the ABC News/Washington Post poll, on the candidates and the issues:

Obama continues to hold double-digit advantages when it comes to being the more friendly and likable of the two, and as the candidate more voters trust on social issues, women’s issues and terrorism. He maintains a big lead when it comes to empathizing with people facing economic problems. And he has a 10-point edge when it comes to handling “an unexpected major crisis,” the first time the question has been asked this year.

He and Romney are judged more evenly on some other key issues, including the deficit, health care and Medicare. Romney does not have significant leads in any of the areas tested in the poll, but he has a numerical edge on dealing with the federal budget deficit, 48 percent to 45 percent, among all voters.

On the economy—still the dominant issue in the campaign—voters render a split verdict, with the two tied at 47 percent.

The state of the economy and dissatisfaction over the country’s direction continue to be steep obstacles to the president’s reelection—but Obama benefits from recent improvements in voters’ moods, even if it is mainly Democrats who are feeling better about things.

More voters still give Obama negative ratings for his handling of the economy, but the number of approvers has edged up to 47 percent, its highest level in nearly two years.