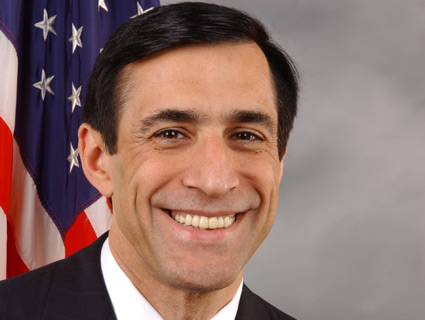 On Thursday, Fox Business Network reported that Rep. Darrell Issa (R-Calif.), chairman of the House Oversight and Government Reform Committee, was preparing to convene a hearing on September’s positive jobs report. The surprising drop in the official US unemployment rate, from 8.1 percent in August to 7.8 percent last month, inspired something of a “job truther” movement—a group comprising the likes of ex-GE CEO Jack Welch and tea party congressman Allen West (R-Fla.) that has put forth the theory that the Obama administration cooked the books in an election year to make the economy seem far rosier than it actually is. (If you’re looking for a swift debunking of this claim, click here.)

Here’s the clip of Fox Business breaking the story, using an excerpt from an interview with Greta Van Susteren:

ThinkProgress, going off the Fox Business segment, reported that Issa was preparing a “congressional investigation into [the] September jobs number conspiracy,” and that Issa was “buying into a widely-discredited conspiracy theory” when he “promised to look into the matter.”

The claim was widely circulated on Twitter and picked up by other news outlets.

There’s just one problem: Nowhere in the Fox clip does Issa actually say he’s going to hold a hearing on any jobs report “conspiracy” involving the Bureau of Labor Statistics, or that he believes the Obama administration orchestrated a massive conspiracy. Fox Business reported that Issa had told Van Susteren he “wants to have hearings” on the “fluky” jobs report and methodology, but the report does not include a soundbite of Issa saying so.

Issa does raise doubts regarding the BLS’s methodology and frequent revisions to previous jobs reports (as he has done before): “The way it is being done with the constant revision—significant revision—tells us that it is not as exact a science as it needs to be,” Issa said. “There’s got to be a better way to get those numbers, or don’t put them out if they will be wrong by as much as half a point.”

While Chairman Issa, in response to a question asked yesterday, did state that he believes there are legitimate questions about the Department of Labor’s method for calculating unemployment, the Oversight Committee has not announced or decided to hold hearings on the September unemployment report. Chairman Issa specifically pointed to the frequent revisions that the Department of Labor often makes to its own numbers in questioning whether more can be done to ensure that they accurately reflect the state of our nation’s job market. At no point did he say he has made plans to convene a hearing on this subject.

So Darrell Issa still thinks that the Department of Labor is flawed and incompetent—which is how he has long viewed much of the federal government.

It is true that Issa has in the past called for congressional hearings of a partisan, sometimes conspiracy-minded nature. In February, he held the “religious freedom” sausage-fest hearing on access to birth control that brought Sandra Fluke into the public eye. He spent weeks trying to nail the Obama administration for its alleged anti-Catholic bias. And he enthusiastically led the investigation into the “Fast and Furious” gunwalking operation—a scandal that many on the right believe to be “Obama’s Watergate,” but has proven pretty far removed from the inane conspiracy-mongering.

But in this particular case, there is no reason to believe Issa will convene a high-profile hearing on The Great Obama Jobs Report Plot. “Issa’s capable of some nutty stunts, but he’s not that far gone,” MSNBC’s Steve Benen initially blogged in disbelief, after catching word of Issa’s nonexistent plans. Benen’s instinctive reaction was the correct one.