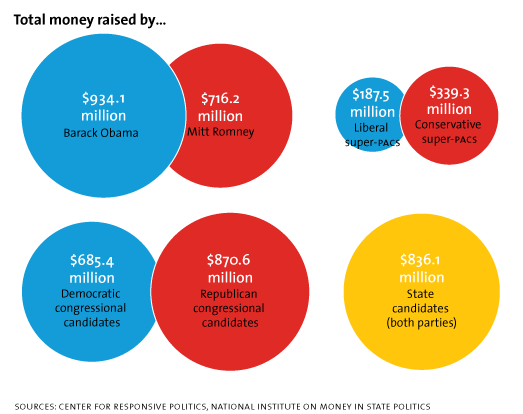 “What is especially striking is that the ads are concentrated on fewer markets than 2008, meaning that a smaller number of Americans have witnessed the onslaught of messages in the race for the White House.” —Erika Franklin Fowler, codirector of the Wesleyan Media Project. Since June 1, 915,000 election ads have run, compared with 637,000 during the same period in 2008. The WMP has visualized its findings in a series of charts like the one below. See the rest here.

Karl Rove’s Crossroads GPS dark-money nonprofit has doled out $4.2 million on an ad buy in Ohio and Wisconsin, its first with a direct appeal to “please vote Mitt Romney for President.” Crossroads claims tax-exempt status as a “social welfare” group, which can not make political activity its primary purpose. (Previous ads had only asked viewers to “tell President Obama” to do something.) “Nonprofit groups are allowed to undertake some political activity as part of their missions as long as it’s not the central thing they do,” Crossroads spokesman Jonathan Collegio told NPR.

$60 million: The amount various groups spent this Tuesday on independent expenditures. Of that, $18 million—the biggest independent expenditure in Federal Election Commission history—came from the pro-Romney super-PAC Restore Our Future. Rove’s Crossroads network pitched in another $12 million, $8 million of it targeting Democratic Senate candidates in eight states. The Democratic Congressional Campaign Committee was the third highest spender with $9 million.

This week, outside political spending by nonprofit groups that don’t disclose their donors eclipsed $200 million, according to the Center for Responsive Politics. That’s more than all previous election cycles combined and nearly double the amount spent in 2010. It’s also probably far less than the actual total: Only ads explicitly supporting or opposing a candidate and issue ads that run within 30 days of a primary or 60 days of a general election have to be reported to the FEC. Of the disclosed dark-money spending, $74.1 million has been spent against Obama, compared with just $5.1 million spent against Romney. 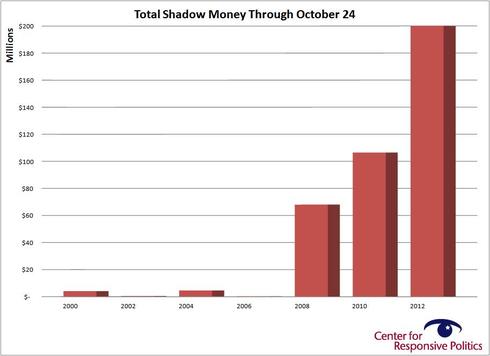 • Sean Eldridge Wants to Curb the Influence of Big Donors—Like Himself: This young Democratic player is putting together a bipartisan effort to get big money out of politics. Of course, it’s going to take a lot of cash.
• 23 Ballot Measures to Keep an Eye On: Pot legalization, gay-marriage bans, and more of 2012’s most important state props and amendments (and the money behind them).
• Inside the Dark-Money Group Fighting Reform in Montana and Beyond: The secretive American Tradition Partnership has ushered in a new era of “funny money with no legal constraints” in Big Sky Country. And it’s just getting started.

• A look at how Obama or Romney might address—or ignore—Citizens United after the election. ProPublica
• Wal-mart heir rebels against conservative family’s donations, donates to pro-Obama super-PAC. Washington Post
• Right-wing Christian nonprofits praise the Koch brothers at an Anchorage fundraiser. Truthout
• Super-PACs haven’t been as dominant as some anticipated. NBC News