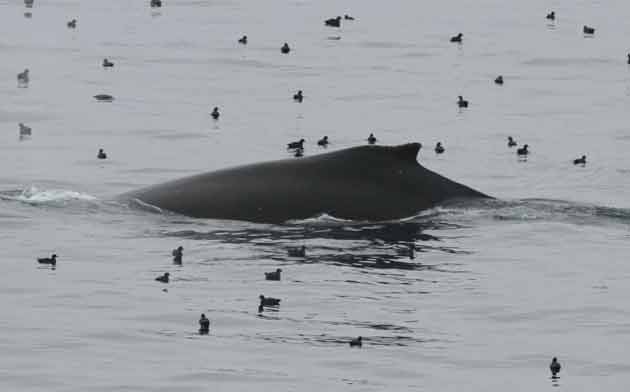 Editor’s note: Julia Whitty is on a three-week-long journey aboard the the US Coast Guard icebreaker Healy, following a team of scientists who are investigating how a changing climate might be affecting the chemistry of ocean and atmosphere in the Arctic. Read her first dispatch here.

On our way north yesterday, we encountered a phenomenal gathering of humpback whales. I’ve seen a lot of whales in my time, dating back to my filmmaking days, but I’ve never seen as many humpbacks as were congregating off Unalaska Island yesterday. They’re migrating south, some to Hawaii, others to the west coast of Mexico. They must have run into something of consequence—maybe krill—for so many to stop and feed.

But because Healy‘s on such a tight schedule, we can’t linger until we reach the first mooring site sometime Tuesday morning. From that point on there will be a crazy amount of work to do literally around the clock in all weather, fair and foul.

Most of the scientists aboard are sampling water from various depths and in various locations in relation to land and rivers. In a way they’re doing what whales and other marine life do: “reading” the water. The humpbacks are presumably reading for clues to food, migration route, friends, and foes. The humans are reading for clues to the rapid change underway as the Arctic icecap dwindles—change that will likely impact the future of krill, humpback whales, and people, to name a few.

The map below marks our current position as of 1517 hours on October 8. The red lines marks our passage up from Dutch Harbor, Unalaska, through the Bering Sea. We passed through the Bering Strait and over the Arctic Circle sometime last night. We’re currently in the Chukchi Sea. You can see the yellowish outline of a boat with red dot in the center: That’s us. The red triangles mark mooring sites where we’ll be stopping to sample water. We’ll be cruising the Alaskan shelf of the Beaufort Sea all the way east to the Canadian Arctic Archipelago. 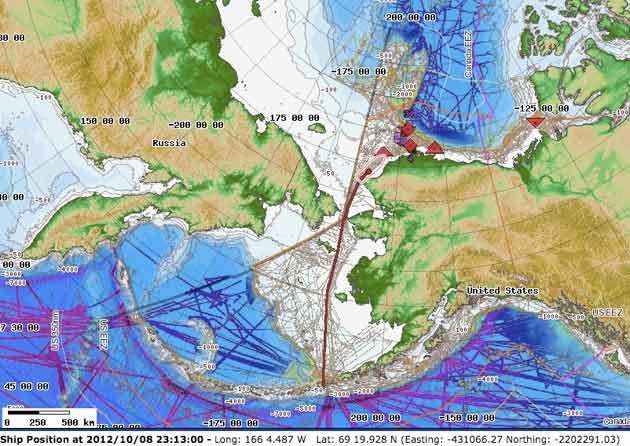 To collect data, the Healy research team will use CTD (conductivity-temperature-depth profiler), a package of oceanographic instruments that captures water at various depths and takes other measurements on its way to and from the bottom. It’s deployed via winch and run to the bottom (or wherever) on cables.

Most research aboard Healy this cruise is supported by the National Science Foundation, Office of Polar Programs.