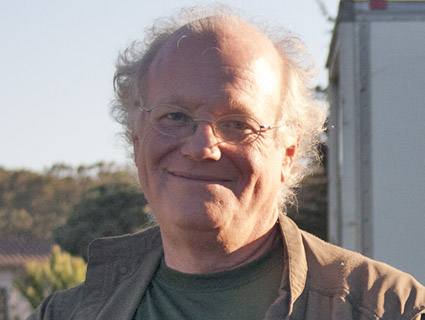 Shortly after I met Ben & Jerry’s cofounder Ben Cohen in San Francisco’s Golden Gate Park last Saturday, he removed a rubber stamper from his pocket, took a dollar bill from my wallet, and stamped it with the words “STAMP MONEY OUT OF POLITICS. AMEND THE CONSTITUTION.”

“Money stamping is kind of like petitions on steroids,” he explained as we sat on a lakeside bench. “You sign a petition and, let’s face it, nobody really sees it. But stamping money is essentially monetary jiu jitsu. It’s using the power of money to get money out of politics.” The money stamp is part of Stamp Stampede, Cohen’s effort to build popular support for a constitutional amendment to undo Citizens United, one greenback at a time.

Cohen hopes that thousands of marked bills soon will be circulating through cash registers around the country. Anyone can purchase a bill stamper on the group’s website. Cohen also plans to spread the message via the Amend-o-Matic Stampmobile, a customized van mounted with a 10-foot-tall “Rube Goldberg-esque machine” that will stamp bills “in an entertaining and educational way.” (The contraption was supposed to hit the streets of San Francisco last weekened, but Cohen cheerfully explained that his team was still “fine-tuning” it.) Ben & Jerry’s, where Cohen is employed as a “pretty face” with “no authority or responsibilities,” is one of Stamp Stampede’s main supporters; Cohen promised “there will be times where ice cream is given away.” 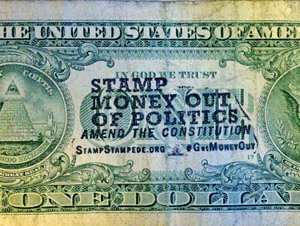 Stamp Stampede, which launched in July, was inspired by two similar projects: the dollar bill-tracking site Where’s George? and the 99-percent themed bill-stamping site Occupy George. It was also inspired by Occupy Wall Street itself. Last fall, Cohen and fellow ice cream magnate Jerry Greenfield stopped by Zuccotti Park and came away “impressed and inspired.” The duo later returned to hand out ice cream. (They hid the company logo and used unmarked cups to appease corporate-wary occupiers.) The board of directors at Ben & Jerry’s also endorsed the movement but stopped short of naming an ice cream flavor after it.

Cohen, a longtime progressive activist, says that his previous efforts to fight the influence of money in politics had turned him into a cynic. After he and Greenfield sold their company to Unilever in 2000, he created Business Leaders for Sensible Priorities, which had taken on a largely unsuccessful effort to convince politicians to shift taxpayer money from military spending into social programs. When Citizens United came down in early 2010, he felt hopeless about overturning the ruling. But after seeing Occupy Wall Street, “I saw that it was possible to have a massive grassroots uprising and started feeling that maybe it was possible to have such a massive outcry that the politicians have to listen.”

Based on statistics from the Bureau of Printing and Engraving and the Federal Reserve, Stamp Stampede reasons that if someone stamps one bill each day for a year, those bills will eventually reach 300,000 people. If 100 people stamp 10 bills a day for a year, those bills will reach 300 million people—roughly equivalent to the entire population of the United States. (To assure would-be stampers that Stamp Stampede doesn’t encourage the defacement of US currency, a legal opinion on the group’s website explains as long as the bill’s still usable, marking it with a political message is fair game.)

The effort has been endorsed by the reform groups Move to Amend, Public Citizen, and People for the American Way. Cohen hopes to attract more independents, libertarians, and Republicans to the cause. “Despite the fact that the Republican rank and file wants to get money out of politics, the only groups that are working to do it are lefty groups. We’re never going to pass the amendment without Republican support.” For that reason, he shies from focusing on corporate personhood, a popular target for progressives that tends to turn off conservatives.

The Amend-o-Matic Stampmobile is scheduled to hit the road this week. It will head to Los Angeles before embarking on a national tour that will end in Florida in mid-December. Cohen also hopes to make use of the Illuminator, a $30,000 truck he lent to Occupy activists that projects protest images on buildings and in the sky.

As we finished our chat, Cohen and I walked through the Hardly Strictly Bluegrass music festival to the bicycle valet parking lot. We were met there by music promoter Mike Kappus, whom Cohen introduced as his “first San Francisco area Stamp Stampede ambassador.” Cohen tipped the woman who returned his bike with a coupon for a free pint of Ben & Jerry’s, and then biked off in search of more bills.