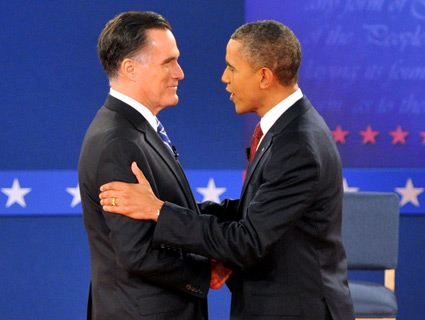 The final presidential debate did not resolve much, but it showed, yet again, that Mitt Romney will say just about anything to win the White House.

The current president had two tasks to accomplish at Debate 3: Foreign Policy Edition. First, Barack Obama had to tout his overseas achievements and beat back the right-wing attack that he is weak and feckless. Second, he had to knock Romney on the defensive and, once again, raise overarching questions about the Republican candidate’s credibility and capabilities. Romney’s mission was more simple: look reasonable and commander-in-chief-ish. A high school debate coach would probably award the match on points to Obama, who was commanding and vigorously described his national security actions. Both candidates met their key goals, but Obama more so than Romney, who accomplished his mission by repeatedly ducking confrontations and often endorsing the president’s own actions—even if that meant Romney was jettisoning his previous stances.

Obama opened by blasting Romney on numerous fronts, charging that Romney has often shifted policies (on Afghanistan, Iraq, Iran, and more) and has invested in companies that offshore jobs to China and elsewhere. “Your strategy…has been all over the map,” he told Romney. He added: “Governor, when it comes to your foreign policy, you seem to want to import the foreign policies of the 1980s, just like the social policies of the 1950s and the economic policies of the 1920s.” He pummeled Romney for supporting the war in Iraq and for opposing a nuclear arms treaty with Russia that 71 senators voted for.

Romney contended that Obama’s foreign policy has been “unraveling” and griped that during Obama’s tenure the world has become more unstable, especially the Middle East. Iran is closer to a nuclear weapon, Romney repeatedly claimed. (Obama countered that Iran has never been more isolated or economically weak, thanks to international sanctions he helped to impose.) Extremism is on the rise and Al Qaeda is not on the run, Romney insisted. There is no “comprehensive strategy to help reject this kind of extremism,” he said.

Yet, in a bizarre pirouette, Romney ended up agreeing more with Obama than not: on the planned 2014 Afghanistan withdrawal, on looking to identify opposition forces to back in Syria, on the Obama’s administration handling of the Egyptian revolution, on the president’s expanded use of drones, on using sanctions to deal with Iran. Romney’s main statement of the night on Afghanistan—”We’re going to be finished by 2014″—was a reversal of his previous position that he would consult with commanders before committing to the timeline established by Obama.

Romney tried to pivot to the economy whenever he could, as he sweated through his makeup.

Here was Romney the moderate. No hawkish talk of wars around the globe (as John McCain suggested during his speech at the Republican convention). Pay no attention to those inconvenient positions of the past. “We don’t want another Iraq,” Romney declared. “We don’t want another Afghanistan.” Those were two wars he has avidly backed, but now he was sounding like the late George McGovern. (It was unfortunate that Romney wasn’t hit with this question: Why don’t you want another Iraq, if it was a necessary war that achieved its noble objective?) Romney did try to cast Obama as not fully supportive of Israel. But Obama pushed back hard, showing no hesitation to play the I-back-Israel-more game. This hardly became a defining issue of the night.

For months, Romney has taken an anti-Teddy Roosevelt approach: Speak loudly and don’t bother with the specifics of the stick. He has blasted Obama for…whatever. He has repeatedly decried Obama as some sort of appeaser in chief, a weak naif who apologizes for the United States. But Romney and his crew haven’t bothered to prove this case; they seem to believe that mere assertion is sufficient—that Romney only has to hurl extreme rhetoric to make his point. Say it over and over, and hope it catches.

After the tragic assault on the Benghazi consulate, the Romney camp believed they finally had a real event to bolster this argument—which is why they eagerly but irresponsibly rushed out an initial statement portraying the Obama administration as a nest of traitors and then, even after being widely criticized for that move, spent weeks politicizing and exploiting the matter. This whole episode tracked too closely with remarks Romney made in the 47 percent video about the impact of the 1979-80 Iranian hostage crisis: “If something of that nature presents itself [during this campaign], I will work to find a way to take advantage of the opportunity.” Yet during this debate—after losing an exchange concerning Benghazi at the second debate—Romney failed to muster much on this topic. It was a sign of a strategic intent: Play it safe.

Earlier this month, Romney delivered a much-ballyhooed (by his campaign) speech on foreign policy. The address revealed Romney’s weakness on this front. He described the world’s knotty dilemmas in comic-book terms, as a struggle between liberty and tyranny. And he blamed the president—who has ordered the deaths of far more Al Qaeda leaders than his predecessor—for lacking clarity on this clash.

Yet Romney in that speech offered few details on what he would do differently. He talked tough—but he, too, supported far-reaching sanctions against Iran. He, too, backed the basics of Obama’s exit strategy in Afghanistan. He, too, said he’d look for reliable opposition groups to support in Syria. Romney’s speech provided one clear alternative: He would more passionately embrace Benjamin Netanyahu. But does Romney believe that if the United States cozies up further with the Israeli far right, US consulates in the Middle East and North Africa will become less-inviting targets?

With the president on his game—pressing Romney repeatedly, articulating his policies effectively—Romney tried to pivot to the economy whenever he could, as he sweated through his makeup. Romney did manage to sound convincing when he returned to his fundamental critique of Obama: that the president hasn’t done enough to turn around the economy. Romney also was forceful when discussing trade with China. And he might have scored points with a defensive maneuver: “Attacking me is not an agenda.” But Romney didn’t land many blows, if any, on the president concerning foreign policy.

In the most dramatic moment of the night, Obama schooled Romney on a basic national security fact. After Romney reiterated his complaint that the US Navy is smaller than it has been since 1917—an assertion PolitiFact judged a pants-on-fire lie—Obama showed the sarcastic streak he rarely unleashes in public:

I think Gov. Romney maybe hasn’t spent enough time looking at how our military works. You mentioned the Navy, for example, and that we have fewer ships than we did in 1916. Well, Governor, we also have fewer horses and bayonets, because the nature of our military’s changed. We have these things called aircraft carriers, where planes land on them. We have these ships that go underwater, nuclear submarines.

If you missed the debate, this exchange is worth watching:

Obama was talking like a commander in chief. Romney didn’t have a response.

Romney’s aim for the final debate was simple: Dare to be boring. He minimized his differences with Obama, providing the president a smaller target. He was looking to get out of this without a wound—it was a gaffe-prevent defense. A senior Obama campaign official recently told me that on national security the president’s strategists want to advance one key theme: “We’re bringing the troops home; Romney wants them to stay.” That’s the best way, the Obama team figures, to move undecided voters on foreign policy. So Obama more than once made this point—only to find it bounce off the shape-shifter sitting across the table from him. Still, Romney’s unrestrained retreat from neocon bellicosity provided Obama an opening to display his national security chops.

After the debate, pundits debated the cliché question: Did Romney meet that mythical commander in chief bar for undecided voters? He may have—by saying little, tossing his previous views overboard, and doing whatever it took to avoid displaying core convictions. That certainly is an adequate strategy for avoiding a decisive debate loss. But it’s a lousy way of becoming a leader.