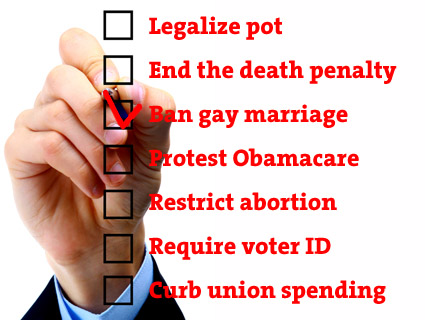 On November 6, Americans will vote on at least 174 ballot measures in 38 states, according to the National Conference of State Legislatures, weighing in on everything from legalizing marijuana to abolishing the death penalty. Here’s a look at some of the most prominent issues being decided:

Banning Same-Sex Marriage
Maryland and Washington passed bills earlier this year legalizing same-sex marriage. But gay marriage opponents, led by groups like the National Organization for Marriage, are backing referendums in both states that would prevent the laws from being enacted. Marriage equality supporters have outraised their rivals $10.5 million to $1.8 million in Washington and $3.2 million to $835,000 in Maryland (including $250,000 apiece from libertarian hedge fund manager Paul Singer and New York Mayor Michael Bloomberg, who has pledged an additional $500,000 to boost marriage equality supporters in Maine, Minnesota, and Washington). Meanwhile, Maine may be the first state to legalize same-sex marriage by popular vote; supporters there have outraised marriage foes $3.4 million to $430,000. In all three states, same-sex marriage leads in the polls. In Minnesota, the campaign to pass a constitutional amendment banning same-sex marriage is being outraised by $5.5 million and is trailing in the polls.

Legalizing Pot
Medical marijuana is legal in Colorado, Oregon, and Washington, but in November all three states have the chance to legalize it for recreational use. A pro-pot measure leads narrowly in Colorado, where a total of $3.7 million has been raised on both sides and pot supporters have outspent their foes by a 4-1 margin. The DC-based Marijuana Policy Project has contributed $1.2 million to the legalization effort, and Progressive Insurance chair Peter Lewis has given $875,000. The Florida-based Save Our Society From Drugs has given $210,000 to the opposition; the Colorado-based Focus on the Family is also a prominent foe. Legalization appears to be headed for defeat in Oregon but enjoys a wide lead in Washington, where legalization supporters have outraised their opponents by $3 million. Meanwhile, Arkansas and Massachusetts voters will decide whether to legalize medical marijuana.

Restricting Abortion
In Florida, voters have the opportunity to amend their state constitution to outlaw public funding for abortion with exceptions for federal requirements and to save the life of the mother. Current polls show a tight race. Opponents of the measure have raised more than $2.4 million, half of it from Planned Parenthood groups. That’s more than 10 times what supporters have taken in.

Requiring Voter ID
Voters won’t have to produce IDs at polling stations in Minnesota, but they will be voting on whether they’ll have to in the future. Amendment 2 would enshrine a voter ID requirement into the state constitution. The amendment’s main opponent, the AARP-backed Our Vote Our Future, has outraised its supporters $183,000 to $135,000. The main group leading the voter ID charge is ProtectMyVote.com, a front group run by the social-conservative Minnesota Majority, which also supports the state’s anti-gay marriage amendment. Support for the voter ID amendment has waned significantly, but it still maintains a clear advantage.

Fighting Money in Politics
After Citizens United invalidated their state’s century-old campaign finance restrictions, citizens in Montana responded with a ballot initiative that would demand that state officials enact a policy rejecting corporate personhood. The initiative polls well and its supporters have raised more than $100,000 (including more than $95,000 from the campaign finance reform group Common Cause). But its critics question its constitutionality since the Supreme Court already struck down the state’s challenge to Citizens United earlier this year. In California, Proposition 32 would ban corporations and unions from spending employee paycheck deductions on politics. Yet because corporations rarely spend paycheck deductions on politics, Democrats have decried the plan as one-sided attack on organized labor. Prop. 32’s opponents have raised more than $58 million, nearly all of it from unions; supporters have raised more than $45 million. Colorado’s Amendment 65, supported by reform groups including Common Cause, Public Citizen, and People for the American Way, would urge the state’s congressional delegation to support a constitutional amendment to mitigate the impact of Citizens United.

Killing the Death Penalty
California’s proposition-deluged voters will also vote on Proposition 34, which would abolish the state’s death penalty and commute at least 725 inmates’ sentences to life without parole. (No inmates have been executed since 2006, when a federal judge placed a hold on lethal injection in the state.) Supporters of the proposition have dwarfed their opponents’ fundraising efforts, $5.6 million to $245,000. Donors include Chicago investor Nicholas Pritzker (whose wife Susan sits on Mother Jones‘ board of directors), a fund run by New York billionaire Charles Feeney, and a number of Hollywood stars and Silicon Valley execs. Still, Prop. 34 appears to be headed toward defeat, thanks in part to an emotional ad campaign that features stories of death rows inmates’ victims. The campaign’s supported by several district attorneys, law enforcement officers, and the father of the girl whose kidnap and murder nearly two decades ago led to California’s death penalty. However, Prop. 36, another criminal justice measure that would revoke part of the state’s three-strikes law, is polling very well.

Protesting Obamacare
In 2010, citizens of Arizona, Missouri, and Oklahoma signaled their distaste for Obamacare by voting to defy the bill’s insurance mandate (a similar measure failed in Colorado). This year, Alabama, Florida, Montana, and Wyoming are voting on related protest initiatives. There hasn’t been a great deal of spending related to the measures, and if any pass they would likely have no effect because they would violate federal law. Missouri is also taking another stab at Obamacare; this time voters will decide whether to prohibit the governor from setting up insurance exchanges without approval from voters or the legislature.

Protecting Collective Bargaining
Voters in Michigan will have the chance to protect the collective bargaining rights through Proposal 2, a constitutional amendment that would prevent a potential effort akin to Wisconsin Gov. Scott Walker’s recent victory for a right-to-work law. Protect Our Jobs, a labor coalition supporting the measure, has raised more than $8 million, more than a quarter of which has poured in from out-of-state unions. An opposing group called Citizens Protecting Michigan’s Constitution, supported by business groups, has raised just $345,000 as of the end of September, $130,000 of it from the state’s Chamber of Commerce. Last year, a similar measure passed in Ohio. Supporters of that measure raised more than $30 million, giving them a 4-1 cash advantage.

Ending Hostile Takeovers
In 2011, Michigan Republicans enacted a controversial emergency-manager law that gives a governor-appointed official unprecedented control over the budgets of economically devastated cities. Proposal 1, which has become increasingly popular as support for the emergency-manager law wanes but still faces an uphill battle, would repeal the law. Spending on the proposal has been modest; most of it has come from the American Federation of State, County and Municipal Employees, which has donated $166,000 toward legal costs and the initial petition to get the measure on the ballot.

Reclaiming the Grand Canyon?
State sovereignty advocates are at it again in Arizona. Proposition 120 declares the state’s “sovereign and exclusive authority and jurisdiction over the air, water, public lands, minerals, wildlife and other natural resources within its boundaries,” prompting Salon to ask if the state is attempting to wrest control of the Grand Canyon from the federal government. The measure was placed on the ballot by Republican lawmakers asserting the tea party mantra of states’ rights. No one’s polled voters on Prop. 120, but it has environmental activists spooked that it could endanger federal environmental protections. A group called Stop the Legislature’s Land Grab, sponsored by the Sierra Club, has raised at least $3,425 to oppose the measure.