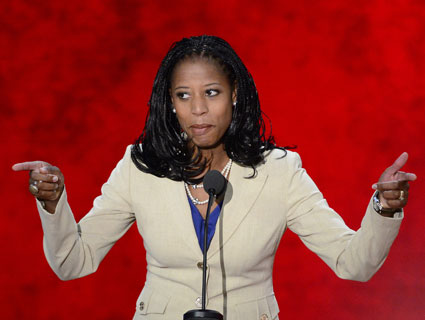 Mia Love has made her Haitian immigrant family’s bootstraps story the centerpiece of her campaign to become the first black Republican woman elected to Congress. But on Monday, Mother Jones raised some serious questions about the Utah congressional candidate’s public statements about her family’s immigration story, which she’s used to justify a host of draconian budget proposals that range from eliminating the school lunch program to axing student loans.

In 2011, Love described herself to a Deseret News reporter as what some in her party like to derisively call an “anchor baby”—that is, someone who was born in the United States to immigrants hoping to gain legal citizenship. “My parents have always told me I was a miracle and our family’s ticket to America,” she told the paper.

The story has created a bit of a stir in Utah, where Love is trying to knock off six-term incumbent Rep. Jim Matheson, the state’s only Democratic member of the House. Love has fired back and done a number of interviews criticizing our story. Yet she still has refused to answer the fairly basic questions Mother Jones has been putting to her campaign for more than a month, namely: How did her parents get to the United States, and how did they survive here on only $10 if they didn’t get any government “handouts”?

Instead of offering a straightforward answer, Love has blamed the Matheson campaign for somehow planting the Mother Jones story. She told a local radio station, “It is so sad that Jim Matheson and his friends would go as far as attacking my family, attacking the American Dream.” For the record, the Matheson campaign had nothing to do with the Mother Jones story.

Love has closely aligned herself with members of her party who have pushed to end birthright citizenship (as outlined in the 14th Amendment) for children they believe were born here in an attempt by their parents to win permanent residency. (In reality, having a baby on American soil is not a sure-fire hedge against deportation.) Her campaign is managed by people who used to work for Sen. Mike Lee (R-Utah), one of the leading proponents of legislation that would deny citizenship to US-born children of non-citizens—people just like Love herself. (The issue was so central to Lee’s own 2010 campaign that HBO’s Newsroom parodied it this summer.)

Despite all of the interviews Love has done in the past 24 hours, she has done little to clear up the inconsistencies in her story. She has claimed amnesia about the 2011 Deseret News interview, saying she just can’t recall saying those things. She continues to claim that her parents came here legally, telling one local TV reporter that her parents had come on a “tourist visa.” When asked by Fox News whether her birth in the United States allowed her parents to become citizens, she replied, “I’m not sure, maybe. What if someone got married? Maybe. Again, what we need to focus on is that legal immigration is a good thing when you’re contributing to society. I’m the product of legal immigration.”

In another interview with the Salt Lake ABC affiliate, a reporter pressed her on her comments to the Deseret News, asking, “Just one last time, for the record…your parents didn’t get to stay in this country because you were born here?” Love responded, “Chris, what if they did? So what? What if they did? I mean they are legal. They are legal US citizens. I was born in this country.”

Of course, the reason all of this matters is that Love has seemingly endorsed deporting American citizens whose parents were illegal immigrants. And it matters because it’s still not clear that her own parents took an entirely “legal” path to citizenship. They came to the country in 1973. She told the Deseret News her parents were able to get “citizenship” after she was born in December 1975. That’s a long time to be here on a tourist visa. Because it was so difficult for Haitians to get permanent visas in the 1970s, most who immigrated came on temporary visas and illegally overstayed. (Even today, nearly half the illegal immigrants in the US came legally on a temporary visa.) In 1986, Congress provided amnesty to many Haitians who were in the country illegally.

Is this how Love’s parents managed to escape the horrors of Duvalier’s Haiti? It would make for a much more complicated story than the one she’s been telling, and it would cast her own professed policy proposals in a far different light. Perhaps that’s why Love still won’t reveal the full story.