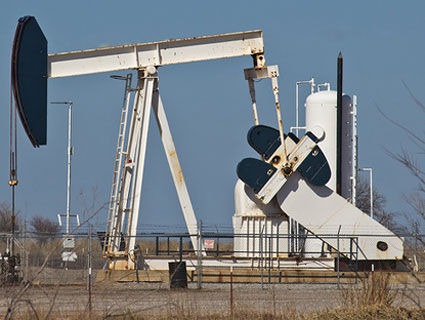 The biggest domestic oil and gas boom in a generation is going unpoliced by regulators in many states, according to a report released today by the environmental group Earthworks. Since 2005, the United States has increased oil production by about 10 percent and gas production about 20 percent, largely due to technological advances in horizontal drilling and fracking. Meanwhile, enforcement actions in six major oil and gas states have not kept pace with all the new drilling.

The report, “Breaking All the Rules,” examined oil and gas regulation in Colorado, New Mexico, New York, Ohio, Pennsylvania, and Texas. It found that in recent years the number of oil-and-gas-related enforcement actions and total dollar amount in penalties in each state have either remained fairly constant or dropped. The only exception was in Colorado, where penalties increased because the state addressed a backlog of old cases.

One reason enforcement hasn’t kept pace with drilling could be that regulators are overwhelmed. In Ohio, Colorado, New Mexico, and Texas, there are more than 2,000 wells for each oil well inspector (there are nearly 4,500 wells per inspector in New Mexico). In 2010, the report found that some states inspected only 1 in 10 oil and gas wells to determine whether they complied with state rules. Here’s a chart of the percentage of oil and gas wells that went uninspected in the each state: 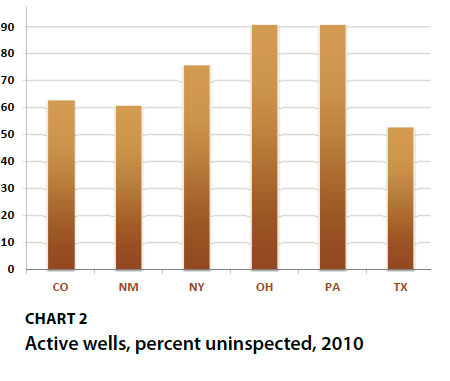 When inspectors in these states do discover violations of the law, their findings often don’t get recorded, or don’t lead to penalties, or result in penalties that are too small to deter bad behavior, according to Earthworks. For instance, an oversight commission in Texas recently found that state regulators take “relatively few enforcement actions, resulting in a lack of deterrence for future compliance.” In 2011, Pennsylvania collected about $1.3 million in total penalties related to oil and gas violations—a drop in the bucket considering that a single Marcellus Shale well on average grosses $2.9 million.*

To be sure, the Earthworks report does not offer a complete picture of the industry. Most notably, it doesn’t examine oil and gas regulation in North Dakota, Alaska, or California, which are, respectively, the second-, third-, and fourth-largest oil-producing states. Those three states have better inspector-to-well ratios than the states in the Earthworks report, with North Dakota leading the pack with a ratio of 1 inspector for every 368 wells. Yet even that number has not translated into a stellar record of environmental enforcement. Despite more than 3,300 oil spills in North Dakota since 2009, the state’s industrial commission has issued only 45 enforcement citations. This recent ProPublica story exposed many of the gaping holes in North Dakota’s oversight of its booming Bakken oil field.

The environment is not the only victim when states fail to hold the oil and gas industry accountable. The other casualty is often the governments of those states, as we’ve seen in the Middle East and Africa. People in the United States still “believe that rules matter—that after the rules are created, the government will enforce them,” Earthworks points out. But “in the case of state oil and gas rules, that is simply not true.”

Correction: Due to errors in the embargoed version of Earthworks’ report, the original version of this article stated that Pennsylvania levied about $1 million in oil and gas fines in 2010. The actual number is $4 million. It also incorrectly stated the year that Chesapeake Energy received a record environmental fine in Pennsylvania. The fine was levied in 2011.