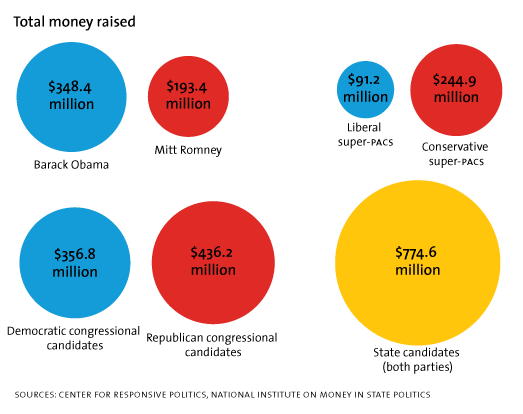 “I mean, if somebody here has a $10 million check—I can’t solicit it from you, but feel free to use it wisely.”
—Barack Obama, speaking to guests about donating to outside spending groups at a fundraiser hosted by Beyonce and Jay-Z. As the Huffington Post reported, the remark was “seemingly in jest” but also the latest example of how closely campaigns have flirted with the ban on coordinating their activities with outside groups. That rule is hardly ever enforced, though, and as Campaign Legal Center senior counsel Paul S. Ryan told HuffPo, Obama’s comment was vague enough to not qualify as a direct request for contributions.

This week, Mother Jones made waves with the release of a secretly recorded video of Mitt Romney making a pitch to wealthy donors in May at the Boca Raton home of private equity manager Marc Leder. Pro-Obama super-PAC Priorities USA Action has already pounced on one of Romney’s most controversial statements in the video, in which he dismissed 47 percent of the electorate as entitled, government-dependent “victims” who will vote for Obama no matter what. After showing an image of a wealthy home and Romney’s comments, the Priorities ad cuts away to a modest house as a narrator replies, “Behind these doors, middle-class families struggle, and Romney will make things even tougher.”

More than 70: The number of dark-money 501(c)(4) groups, ostensibly operating as tax-exempt “social welfare” organizations, that the Internal Revenue Service is investigating. The groups can’t legally make political activities the majority of what they do, although many make little effort to conceal their political spending, and the IRS has had its eye on groups like Karl Rove’s Crossroads GPS for several months now. Even so, the agency hasn’t stripped a single group of its 501(c)(4) status in the past six months.

The Daily Beast and Center for Responsive Politics dug through tax filings to do their best job to piece together the interconnected world of dark-money 501(c)(4)s. The chart doesn’t paint a complete picture, since numbers from the 2012 election won’t all be released until at least mid-next year, but it does list known grants made by the groups and to whom they were given. (Obscuring sunlight further, a federal appeals court overturned a lower court’s decision, in Van Hollen v. FEC, to require tax-exempt groups to reveal their donors.) 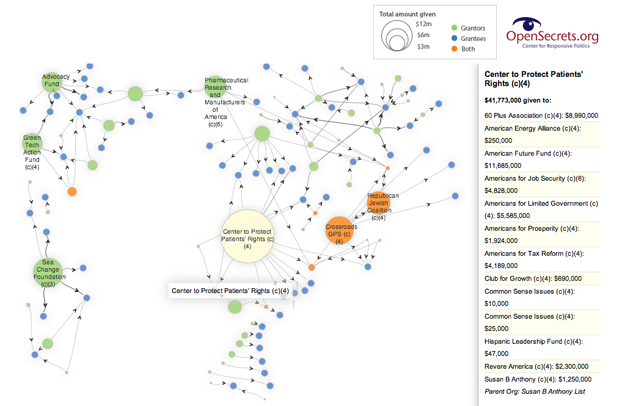 • Romney Funder’s Israeli Newspaper Buries Video Controversy: Sheldon Adelson spends millions on ads for Mitt, but tries to downplay the GOP candidate’s gaffes.
• Crossroads, US Chamber, and Other Dark Money Groups Notch Big Court Win: A federal appeals court has overturned an earlier ruling demanding that nonprofits unmask their donors for certain ads.
• Liberal Super-PAC Targets Koch Brothers With Attack Ads in Wisconsin and Iowa: Patriot Majority takes the fight to the Kochs in the state that, for liberals, made them infamous.
• Who Was at Romney’s “47 Percent” Fundraiser?: Some possible guests at the $50,000-a-plate Florida event where the candidate cast Obama voters as moochers.
• SECRET VIDEO: Romney Tells Millionaire Donors What He REALLY Thinks of Obama Voters: When he doesn’t know a camera’s rolling, the GOP candidate shows his disdain for half of America.

• Sen. Bryan Dorgan (D-N.D.) joins the campaign finance reform cause. Center for Public Integrity
• Outside spending groups have accounted for close to half of all political ad spending, according to one analysis. MSNBC
• More charts from the Daily Beast and Center for Responsive Politics.