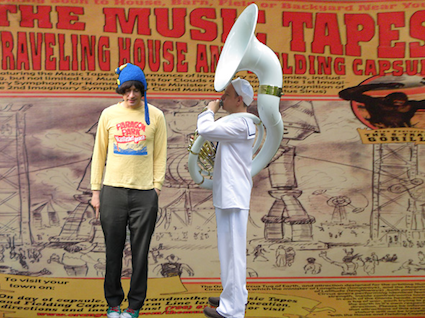 The Music Tapes
Mary’s Voice
Merge
To enter the world of Julian Koster is to take part in a surrealist circus. “We think this fall is a perfect way for the ‘traveling imaginary’ to make its way out into the world,” the visionary behind experimental pop group The Music Tapes announced to his fans on Kickstarter last month. He was referring to the band’s ambition following the release of its third album, Mary’s Voice: To travel the world performing in a circus tent complete with whirring and fantastical attractions.

It’s the sort of thing to be expected from Koster and his ever-evolving psychedelic cabaret. The Music Tapes, one of the projects that blossomed out of the cult-worshiped music collective Elephant 6 in the late ’90s, cart around a seven-foot-tall metronome for their shows, spin folky yarns about sideshow performers who can swallow cities, and serenade audiences with lullabies over the musical saw. Mary’s Voice might be the Tapes’ most accessible album yet, but it hardly conveys the magic of seeing them live.

To be fair, there are lots of details to indulge in on the album. Parts of it were captured on recorders from the early 20th century, which lends the tracks a crackling, sepia-toned nostalgia. Any Jeff Mangum fan is bound to fall for Koster’s expressive keening on songs like “The Big Beautiful Shops (It’s Said It Could Be Anyone)” and “Go Home Again”—both have a dreamy, old-world quality that brings to mind the paintings of Marc Chagall. Meanwhile, “Playing ‘Evening'” and “Takeshi and Elijah” conjure up classic Neutral Milk Hotel (of which Koster and Mangum were members), recalling the muffled, bashing majesty of NMH’s Over Avery Island.

Still, the moments that might be most mesmerizing live can fall flat on headphones. Watching Koster wring a ghostly lullaby out of his saw gave me chills when I heard the Music Tapes open for Mangum last year, but 16 seconds of silence followed by a minute-and-a-half saw solo on the record were trying. The wailing, too, lost its sense of emotional urgency and grew indistinct. By the end of the album, I was left mostly cold, with only a hazy, half-remembered dream involving carousels, maybe, and banjos.

The charm of the Music Tapes relies on the listener’s willingness to suspend disbelief, to play, and to patiently allow the band to wax poetic and perform. That’s commitment, to a degree, and perhaps the band’s fantasy requires a sturdier vehicle than headphones to transport its listeners. That said, a circus tent doesn’t seem like such a bad idea. This kind of music begs for a sacred space, one that might temporarily block out cynicism and invite wonder.