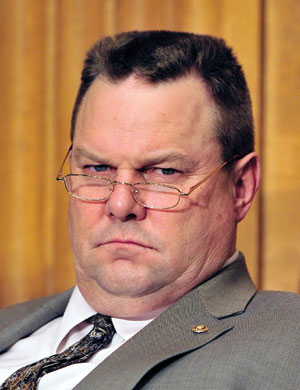 Photograph by Ron SachsWhen the National Republican Senatorial Committee unleashed a new attack ad against Sen. Jon Tester last fall, it stuck to a familiar template—tie him to the president. As a narrator portrayed the rural lawmaker as a consummate Washington insider, an image of the Montana Democrat patting President Obama on the shoulder flashed across the screen. The Tester camp was predictably outraged, but not for the reasons you might think: Its ire centered on a doctored photo of the senator, seeming to show him with a left hand bearing all five fingers. A childhood meat grinder accident in the family farm butchery had in fact claimed all but Tester’s thumb and pinkie.

The misstep gave Tester’s supporters a chance to emphasize his hard-won farmland cred: How dare his opponents deny an injury sustained in the name of ranching? This was no trivial matter. Tester partisans knew that Republicans were aiming to make the race a referendum on whether the seven-fingered farmer-senator is Montanan enough for Montana.

Not that painting Tester as a typical Beltway pol will be easy. He spends his weekends tending purple barley, peas, and wheat on his 1,800-acre farm outside of Big Sandy (population 598). He forks over $8 every three weeks for the same flat-as-a-butte buzz cut he’s sported since he was teaching trumpet lessons to elementary-schoolers in the late ’70s. The New York Times once ran a story about the hand-slaughtered beef he regularly transports to Washington in a special carry-on cooler, which, come to think of it, also explains what Tester likes to call “a shelf on my stomach where I can put my drinks.”

Six years after knocking off Republican incumbent Conrad Burns, Tester, once viewed as the populist Western Democrat of the future, is locked in one of the most closely watched races in the country. His showdown with GOP Rep. Denny Rehberg, the state’s lone congressman and winner of six statewide elections, is among a handful that will determine control of the Senate. With outside groups like Karl Rove’s American Crossroads set to flood the airwaves with millions of dollars of attack ads, it will almost certainly be the most expensive race in Montana history. By mid-July, $6.5 million had already been spent on the race, close to half the 2006 total, with the biggest expenditures yet to come.

Tester will no doubt have a harder row to hoe than in 2006. After being coaxed into the Democratic primary in 2005, Tester, then the state Senate president, rode into office with the help of Democratic Gov. Brian Schweitzer, strong netroots backing, and an almost comically inept performance by Montana Republicans.

One Republican attack ad mocked Tester’s haircut and accused him of not tipping—a charge that was swiftly rebutted in a counter ad featuring Tester’s barber. Then, three months before the election, Burns lambasted firefighters for failing to contain a wildfire. In the end, Tester won by fewer than 3,000 votes. (This year, just before starting his Senate bid, Rehberg sued the Billings fire department for what he considered a poor response to a wildfire on his property. “If Montana Republicans have a playbook that says one of the things you should do when running for the US Senate is attack firefighters, I’m not sure where they’re getting that advice,” quips Matt Singer, a onetime Tester campaign staffer.)

A former ditchdigger with a bushy mustache evoking a bizarro-world Burt Reynolds, Rehberg served a term as lieutenant governor in the 1990s before launching a failed Senate bid in 1996. When he reemerged four years later to run for the state’s at-large House seat, he pulled out all the stops. His campaign sent out mailers suggesting that his Democratic opponent, then-state schools superintendent Nancy Keenan, wanted to put Playboy in school libraries. After another GOPer implied that Keenan was gay, generating a whisper campaign that dogged her until Election Day, Rehberg’s campaign aggressively pushed a family values image that posed a sharp contrast to the unmarried and childless Keenan.

Montanans who suspected Rehberg of gay-baiting had historical cause. As lieutenant governor in 1994, he questioned whether the government should provide medical care to people with AIDS, telling a group of local officials, “The problem with AIDS is, you get it, you die, so why are we spending any money on people that get it when we can’t even take care of the people who we can fix because we don’t have enough money?” In 2008, not long after Sen. Larry Craig (R-Idaho) was caught propositioning an undercover cop in a men’s bathroom, Rehberg jokingly gave Rep. Mike Simpson (R-Idaho) what he called an “Idaho travel package.” According to The Hill, the “contents included a stuffed sheep with gloves attached to it…a Village People CD, books on cross-dressing and sign language and a T-shirt that reads, ‘My senator may not be gay, but my governor is Butch.'” (Butch Otter is Idaho’s Republican governor.)

This wasn’t the first frat-house-style episode the congressman was implicated in. Talk to Montana Democrats and they’ll point you, with a wink and a nod, toward the Kazakhstan Incident. In that case, an anonymous email—purportedly from a State Department staffer—forwarded to Roll Call alleged that Rehberg had downed 20 shots of vodka during a 2004 congressional trip, mocked his hosts by making “meep meep” noises like the aliens in Coneheads, and capped the festivities by being trampled by the horse he was riding. (Rehberg’s office denied that he’d made fun of his hosts and offered a range of excuses for his tumble from the saddle. They also produced a witness who said he’d taken around 6 shots, not 20.) There’s also the time when, after a night of drinking on Montana’s Flathead Lake in 2009, Rehberg suffered a broken ankle after his drunken companion (a state senator) crashed their boat into the shoreline.

None of this seems to have curbed Rehberg’s appeal—since November he has consistently polled a couple of points ahead of Tester. Although Rehberg has largely toed the party line in Washington, lately he’s tried to cultivate a maverick image back home. Rehberg is skipping the Republican National Convention, and he’s highlighted his opposition to the Paul Ryan budget in campaign ads, noting that the plan “could harm the Medicare program that so many of Montana’s seniors rely on.”

His campaign, joined by outside groups, is determined to paint Tester as a local boy who has been corrupted by Washington and Wall Street, a yes-man for the Obama administration, and, as Rehberg’s spokesman told Esquire, “a liberal former music teacher.”

Impugning a candidate’s authenticity is one of the oldest political tricks in the book, and Tester clearly realizes that two can play that game. At their first debate in June, Tester deadpanned, “Building houses and mansion ranchin’ ain’t ranchin’.” In case debate watchers were confused, his campaign then released a lengthy dossier attacking Rehberg’s rancher persona, noting that he had given away his herd of cashmere goats a decade earlier and converted part of his property into a McMansion subdivision.

The irony for Tester is that he owes his 2006 victory not to the large crop of Montana voters who look and live a lot like him, but to a patchwork coalition of college kids, transplants, American Indians, and retirees. When the final votes were counted, Tester had done significantly worse among rural voters than Schweitzer did in 2004—but he’d managed to improve enough on Schweitzer’s performance among liberal constituencies to carry the day. He was, Singer ventured at the time, “the first urban elected official to ever come out of Montana.”

As Republicans try to whittle away Tester’s farmer bona fides, the senator is also coming under assault from his own base. The big rift came in late 2010, when Tester announced that he could not support legislation that would grant a path to citizenship to certain undocumented kids. With the whip count stuck in the no man’s land between a 50-vote majority and the 60 needed to beat a filibuster, that all but assured the DREAM Act’s demise.

To Markos Moulitsas, founder of the progressive blog empire Daily Kos and a key Tester supporter in 2006, it was the ultimate betrayal: “Not only will I do absolutely nothing to help his reelection bid,” he wrote, “but I will take every opportunity I get to remind people that he is so morally bankrupt that he’ll try to score political points off the backs of innocent kids who want to go to college or serve their country in the military.”

Today, majority at stake or not, Moulitsas’ position has only hardened. “Anyone who attacks innocent children and destroys their hopes and aspirations is an irredeemable scumbag,” he told me.

With influential out-of-state progressives like Moulitsas jumping ship, protecting Tester’s rural mystique is all the more vital. “Virtually no one in Montana is more than one or two generations away from a family that was farming, ranching, logging, mining, doing something day-in, day-out that takes a lot of hard work and is all land,” Singer says. “If he wasn’t who he is, I think this race would be done a long time ago.”