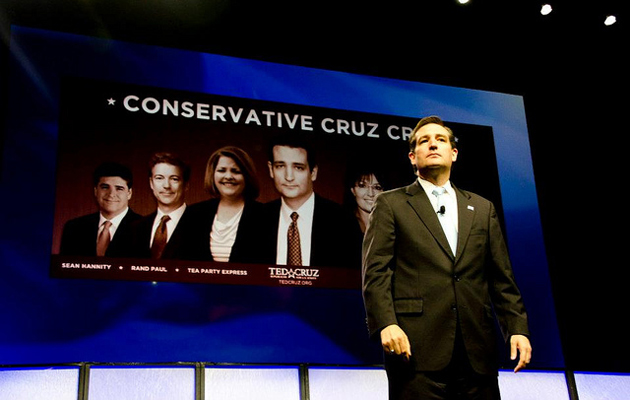 On Tuesday, former Texas Solicitor General Ted Cruz walloped the state’s lieutenant governor, David Dewhurst, to ice the GOP nomination to replace retiring Sen. Kay Bailey Hutchison. In a place where Democrats haven’t won a statewide election since the 1990s, that all but guarantees Cruz will join the world’s most deliberative body next January. The Washington Post‘s Sean Sullivan calls it “a victory for the tea party and national conservatives who lined up behind Cruz even when a surprise win appeared unlikely.” This is mostly true, but there’s something else that’s worth noting about the GOP’s fresh young face: For someone with a reputation as an “intellectual force,” he holds some pretty out-there views.

He thinks George Soros wants to ban golf: Like many conservatives, Cruz believes that the United States’ sovereignty is under assault from an obscure United Nations agreement called Agenda 21. Although Agenda 21 does not have the force of law, right-wingers believe the treaty’s sustainable-development precepts will force Americans to live in “hobbit homes” and forcibly relocate residents from rural areas into densely populated urban cores. “Agenda 21 sounds like absolute crazy conspiracy theory nut stuff, but it’s not,” explains Glenn Beck. As Cruz puts it on his website:

The originator of this grand scheme is George Soros, who candidly supports socialism and believes that global development must progress through eliminating national sovereignty and private property. He has given millions to this project. But he is not the only one promoting this plan; in fact, the International Council of Local Environmental Initiatives (ICLEI) now consists of over 600 cities in the United States.

Agenda 21 attempts to abolish “unsustainable” environments, including golf courses, grazing pastures, and paved roads. It hopes to leave mother earth’s surface unscratched by mankind. Everyone wants clean water and clean air, but Agenda 21 dehumanizes individuals by removing the very thing that has defined Americans since the beginning—our freedom.

As Senator, he’s pledged to confront the Agenda 21 menace head-on. Here’s a video of Cruz discussing the treaty with Beck, in which Cruz concurs that Fannie Mae and Freddie Mac could become vessels for the mass eviction of rural Americans in the name of sustainable development:

He thinks Shariah is creeping: At a campaign forum in July, Cruz told a questioner that “Shariah law is an enormous problem” in the United States. Although plenty of Texas Republicans have voiced concerns about the slow creep of Islamic law into their state, there’s no evidence that that’s actually happening.

He believes in nullification: Before the Supreme Court upheld the legality of the Affordable Care Act once and for all, Cruz argued that Obamacare could simply be nullified by states if they disagreed with it. He believed that if two or more states formed an “interstate compact,” they could ignore the law because the compact supersedes federal regulation. He also thinks Medicare is unconstitutional.

He’s really, really proud of his executions: The Texas Observer‘s Anthony Zurcher, who has a very good profile of Cruz, breaks it down:

Cruz claims he’s proudest of the 2008 case Medellín v. Texas. He cited the case by name during his closing statement at the January 12 GOP Senate candidates’ debate in Austin. It’s easy to understand why. The case featured a United Nations court, federal government intrusion on state power and a Texas favorite: the death penalty. The case involved Jose Medellín, a Mexican citizen on death row for the rape and murder of two teenage girls in Houston, and 50 other similarly situated Mexican nationals who had not been informed of their right to seek legal assistance from the Mexican government following their arrests. Mexico had challenged the convictions before the International Court of Justice, which ruled that the United States had violated the Vienna Convention on Consular Relations and that the cases should be reopened.

The Bush administration attempted to force a recalcitrant Texas appeals court to reconsider Medellín’s case in light of the international court’s decision and U.S. treaty obligations. Cruz countered that neither the international tribunal nor the federal government could tell Texas courts what to do.

Medellín was executed in 2011. Cruz was so excited he made it into a campaign ad:

He is afraid of teh gayz: During the primary, Cruz used his opposition to gay rights as a wedge against lesser opponents like former Dallas mayor Tom Leppert, noting that his opponent had marched in not one but two pride parades. “When the mayor of a city chooses twice to march in a parade celebrating gay pride, that’s a statement. It’s not a statement I believe in”:

On his website, he brags about his work nullifying the divorce of two gay men who had gotten married in Vermont, noting that “When a Beaumont state court granted a divorce to two homosexual men who had gotten a civil union in Vermont, Cruz, under the leadership of Attorney General Greg Abbott, intervened in defense of the marriage laws of the State of Texas, which successfully led to the court judgment being vacated.” As solicitor general, he fought to protect the Boy Scouts’ ban on gay scout leaders. At the Values Voters summit last October, Cruz warned that American politics had been hijacked by the “gay rights agenda.” If Cruz is really going to be a 21st-century political star, he’ll have to work on the “21st century” part.