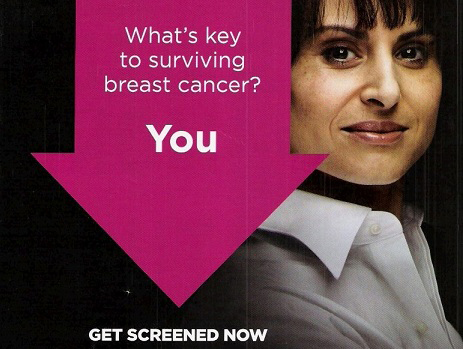 Cancer charity Susan G. Komen for the Cure announced a major shake-up on Wednesday, with CEO Nancy Brinker stepping down and President Liz Thompson leaving the organization in September. Brinker will move to a new role as the chairwoman of the board executive committee, the group announced. Two board members are also departing.

The announcement comes the same week as a new paper in the British Medical Journal (BMJ) takes aim at Komen for promoting early detection as the key to cancer survival. A recent ad campaign for the group features a smiling woman with the message, “Get screened now.”

“Early detection saves lives,” the ads state, adding that the five-year survival rate for breast cancer is 98 percent when it’s caught early and only 23 percent when it’s not. But Steven Woloshin of the Department of Veterans Affairs Medical Center and Lisa M. Schwartz of the Center for Medicine and the Media at the Dartmouth Institute for Health Policy and Clinical Practice point out in their BMJ article that the ads “dramatically overstate the benefit of screening” and neglect to mention that screenings aren’t always good for women.

The figure Komen’s ad uses is bogus, the pair writes, because the short-term survival rate would most certainly be improved by spotting the cancer earlier. The five years is from the date of diagnosis, meaning screened women would have a longer lead time. Without screening, the cancer isn’t caught until it’s much farther along. “Comparing survival between screened and unscreened women is hopelessly biased,” they write. And the stat says little about longer-term survival rates, which are far more important. They explain:

Meanwhile, the ads don’t mention some of the problems caused by too much screening. Between 20 and 50 percent of women screened every year for ten years will experience at least one “false alarm,” which could result in over-diagnosis (which also distorts survival rate figures). For every life saved by an early mammogram, 2 to 10 women are misdiagnosed and undergo unnecessary medical treatment, they write. This is why the US Preventive Services Task Force recommends that women wait until they’re 50 to start getting mammograms, and then only get them every two years.

It’s been a rough year for Komen, the ubiquitous cancer charity known for pink ribbons and walkathons. The group drew fire in February after it stopped its grants for cancer screenings at Planned Parenthood clinics. Komen later reversed course, but the controversy did serious damage to their brand.