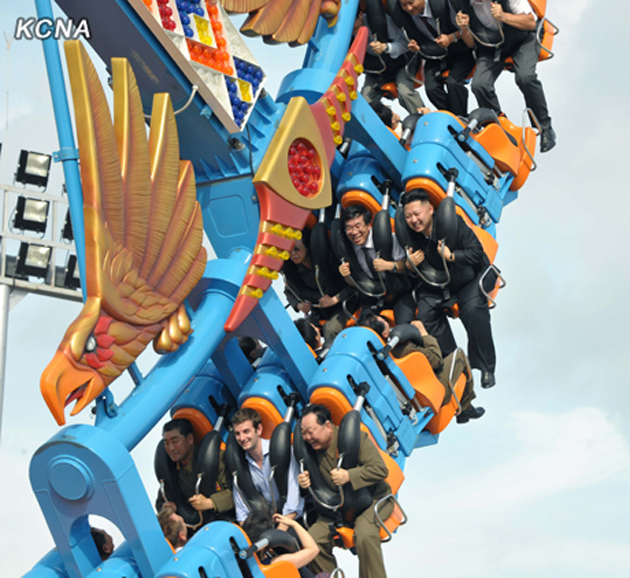 All in a day's diplomatic work.Korean Central News Agency

If life is full of surprises, being strapped into a vertiginous fun-park ride with the new leader of the world’s most reclusive regime surely takes the cake.

New photos of Kim Jong Un went viral last week, depicting a kind of cheerful analog to modern life that we’ve come to know and distrust from North Korea. There was the young leader, looking more like his grandfather than his dad. There he was, parading his recently betrothed, “Comrade” Ri Sol Ju, around Rungna People’s Pleasure Ground, a new water-cum-amusement park in the nation’s capital. Footage aired on state media showed adoring crowds as KJU kicked it with the commoners, marveled at synchronized divers, and received unending applause.

But one photo in particular prompted a flurry of speculation in the West: Who was that foreigner grinning in front of Kim on that soaring ride, seated with a high-powered coterie of flaks? Unlike Bill Clinton or Madeleine Albright, this guy surely didn’t pack a powerful diplomatic punch. How did he end up getting flung about inside North Korea’s propaganda machine?

Mother Jones has confirmed through multiple sources that he is Barnaby Jones, a junior diplomat with the British Embassy in Pyongyang. (Jones was identified in the Los Angeles Times around the time of Kim Jong Il’s death as the embassy’s “first secretary.”)

Reached by phone, an official in the British Foreign and Commonwealth Office in London confirmed Jones’s identity. The office would not make Jones available for an interview, citing his busy work schedule. In a follow-up statement sent by email, a spokesperson described the event at the amusement park as “unusual.”

Pyongyang’s diplomatic community was invited to the opening of the Rungna People’s Pleasure Ground. This included the Chargé d’Affaires of the British Embassy, who accepted the invitation to attend. While this was an unusual event, it is vital that we actively engage with the North Korean administration since we work closely with them on a number of humanitarian, cultural and education projects which benefit the people of North Korea.

Photos released by North Korea’s state-controlled media provide only glimpses into a sealed-off society—and pictures with foreigners are rare, and typically stilted. What’s particularly intriguing in this case is that the foreigner was previously unknown on the world stage, says Charles K. Armstrong, director of the Center for Korean Research at Columbia University.

“That is quite surprising to show a foreigner in such proximity to Kim Jong Un,” says Armstrong, who has traveled regularly to North Korea and returned recently from a trip there. “Normally pictures of the leader with a foreigner would be carefully staged.”

This one may well have been, too, of course. In Armstrong’s view, it’s an attempt by Kim and the new leadership to cast off the stuffy image of his father and establish him in a new light. “I’ve never seen a picture of his father or grandfather ride an amusement park ride,” Armstrong says. “Then to be in the next car over with a youngish looking foreigner seems to convey more of a human image.”

Perhaps Jones felt some trepidation when boarding the ride in Pyongyang; the capital city, though used by the regime for show, is dilapidated and suffers long blackouts on a regular basis. Conditions in the countryside are even worse. The World Food Program says 1 in every 3 children in North Korea is chronically malnourished or “stunted,” meaning “they are too short for their age.” The United Nations says more than 6 million North Koreans, of a population of 24 million, urgently need food aid. 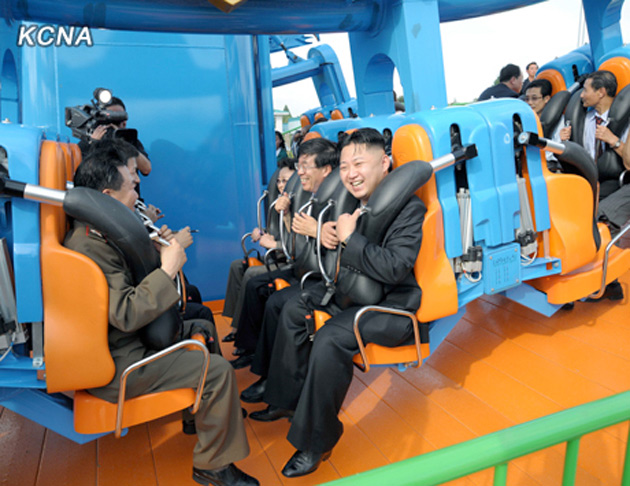 But that hasn’t stopped the leadership from prioritizing fun parks. “Genuinely and enjoyably riveting,” is how Issac Stone Fish described his experience on a Pyongyang roller coaster for Foreign Policy. The Theme Park Guy website, which aims to provide listings on all the world’s theme parks, was impressed when it visited another site in the capital:

…in a city with no internet, no international phone calls and no shopping malls, this beacon of modernity sports a brand-new, Italian-manufactured (Zampano Ltd), belly-down “flying” roller coaster and entices visitors with an absolute rarity in bleak Pyongyang: light at night!

Kim apparently loves amusement parks. He has reportedly attempted every ride at another one in town, Kaeson Fun Fair, the state-of-the-art complex with Italian-made rides. Three plaques mark Kim’s favorites there with his official approval, according to Armstrong. “In a peculiar North Korean way, there’s a populist element to how Kim Jong Un is building up his power and his image, and I see this as part of that,”  Armstrong says. He and the military regime around him are projecting that “he likes to have fun; he has a beautiful wife. He is on the one hand an omniscient leader but in some respects an ordinary person…He actually seems to like interacting with people.”

The extraordinary photo capped off an unusual few months in which Kim also revealed his marriage. “The private lives of the top leader have always been off limits,” Armstrong says. Kim’s late father never showed off a female companion in public, despite having a few in private.

Recently there has been a pattern of investment in the capital, according to Armstrong, including tall, modern apartment buildings. “There’s a lot of cash, it seems, and economic investment in Pyongyang itself,” Armstrong says. But he adds: “I don’t see any evidence that North Korea is on the verge of any serious reform…Now the gap between consumer lifestyle in Pyongyang and the rest of North Korea is quite striking.”

Meanwhile, since the photo including Jones went viral, there have been reports that the North Korea news service has deleted the photo (as well as others showing Kim on the ride) from its website.