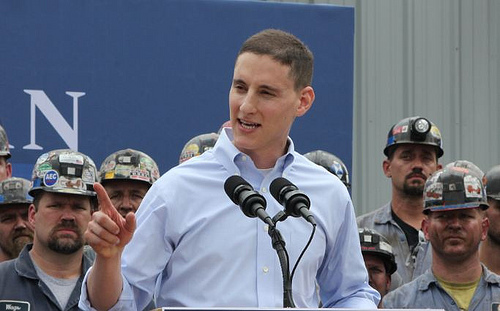 Josh Mandel is the boyish-faced, factually-challenged Republican candidate vying to unseat Sen. Sherrod Brown (D-Ohio). Until last weekend, Mandel had refused to stake out a clear position on what had become a key issue in this Rust Belt race: whether Congress was right to rescue auto manufacturers General Motors and Chrysler with a $15 billion federal bailout. It was a glaring omission for Mandel, a national candidate in a battleground state where the automotive industry employs upwards of 140,000 Ohioans.

In a joint interview with Brown on Sunday, however, Mandel broke his silence in a big way. He called Brown “un-American” for voting in favor of the auto industry bailout, claiming that non-union retirees at Delphi, a GM parts supplier, got screwed out of of their pensions because of the government bailouts. (As PolitiFact notes, that’s not quite true.)

There’s a big problem with branding a yes vote on the auto bailout “un-American”: The presumptive vice-presidential nominee for Mandel’s own party, Rep. Paul Ryan (R-Wisc.), voted yes for that same bailout. Is Ryan un-American, too?

I put that question to Mandel spokesman Travis Considine in an email early Tuesday morning. Considine has yet to reply; we’ll update this post if he does.

Ryan was one of 32 House Republicans to vote for the auto bailout on December 10, 2008, vastly outnumbered by the 150 House GOPers who voted against it. Then-Sen. George Voinovich (R-Ohio), in Congress’ upper chamber, also voted in support of the auto bailout; he was joined by seven other Senate Republicans. Is Voinovich also un-American, according to Mandel?

Mitt Romney has a more complicated record on the auto bailout. In November 2008, he wrote an op-ed titled “Let Detroit Go Bankrupt.” He argued then that rescuing the auto companies would only lead to their demise further down the road. (He was wrong.) Later, Romney tried to claim credit for the auto industry’s rebound, despite his insistence that the bailouts would ruin the companies.

Brown, who was present when Mandel called him un-American, declined to respond directly to the charge. Here’s the full exchange between Brown and Mandel, as reported by the Columbus Dispatch:

“I don’t toss around the word un-American very often—it’s a dangerous word to use. But stripping…Delphi employees of their pensions with that [bailout] vote—that is un-American,” Mandel said during a sit-down with Brown and editors and reporters of the Dispatch.

Brown didn’t say anything about the “un-American” label, but one of his campaign aides later said it was disrespectful.

Ohio Democratic Party spokesman Andrew Zucker responded to Mandel’s “un-American” charge, saying that “Josh Mandel’s opposition to the auto rescue that helped to protect nearly 850,000 Ohio jobs is wildly out of touch with Ohio’s middle class, and that’s why he’s resorted to a despicable personal attack on Sherrod Brown that has no place in our political discourse.”