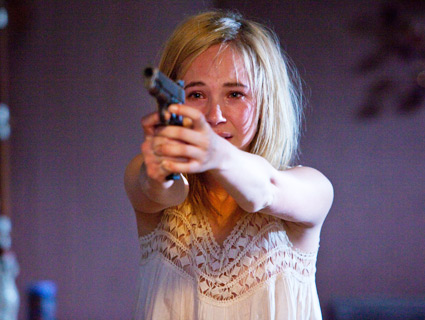 Killer Joe is the best film of 2012 thus far—provided that you don’t mind pervy, blood-caked, nihilistic, claustrophobic, morally deviant, unstoppably depraved, ultimately pointless fare. To give you a taste of what you’re in for, allow me to paint a picture of one of the movie’s tamer sequences:

In a desolate town outside of Dallas, a blonde preteen wearing a tight black dress from an outlet store stands in her dad’s trailer. Their home is covered in litter, muck, and grease. The girl, Dottie Smith (played by British actress Juno Temple), proceeds to model her new outfit for her father Ansel (Thomas Haden Church), who tells her, “You look like a goddamn movie star.” Her giddiness quickly evapporates as her dad informs her that tonight she is to be pimped out as “retainer” to Dallas detective Joe Cooper (Matthew McConaughey), a part-time hitman who craves young flesh. Dottie rushes back into the bedroom, repeatedly screaming “I have to change!” as tears and snot run down her face. Ansel practically kicks down the door in his effort to brutishly pull her out of the room. Soon enough, “Killer Joe” arrives, beaming with a cold, lustful stare. Soon enough, he casually orders her to strip.

The feel-good movie of the year this is not.

For an hour and forty minutes, Killer Joe scrapes the bottom of the barrel of human impulse, earning every inch of its hard NC-17 rating. The blood splatter is thick, the depiction of sexual violence is flooring, and Gina Gershon‘s bristly, cable-knit pubic hair is, well…it’s really out there.

Director William Friedkin easily outpaces the grit and shock-value of the rest of his filmography, making flicks like The French Connection, The Exorcist, To Live and Die in L.A., Rampage, and Bug all feel like fine family viewing. But if you manage to stomach the pervasive filth and fury, you’ll notice a film brimming with smart dialogue, thrilling performances, beautifully crafted tension, and gut-busting black comedy.

Killer Joe puts its focus squarely on the dirtiest, most despicable people on the face of the planet. It’s the latest entry into the when-you-hire-a-hitman-to-murder-a-memeber-of-the-family-for-life-insurance-everything-goes-wrong subgenre of cinema. The plan is set in motion by loser drug dealer Chris Smith (Emile Hirsch), who books the pedophilic Killer Joe for the gig (the target is Chris and Dottie’s mother / Ansel’s ex-wife). Ansel’s ghastly second wife Sharla (Gina Gershon), the dumb-as-rocks Ansel, and the wretched Dottie all sign on to the scheme. Subsequently, everything goes to hell in a twisted, horrifying handbasket.

By the film’s jolting close, there is absolutely no lesson to be learned, no morals upon which to reflect, no pathos to be taken seriously, and no tangible point to be made. It simply stands as an exercise in jaw-dropping trailer trash opera. But with a movie this perversely arresting, the moral vacuum is more than tolerable.

Killer Joe marks the second collaboration between Friedkin and Pulitzer-winning playwright/screenwriter Tracy Letts, who wrote Friedkin’s 2006 Bug, adapted from his 1996 stageplay of the same title. Letts’ script (along with his original 1993 drama) is unsparing in its pursuit of carving the savagely funny out of the otherwise reprehensible and frightening. (The scene in which Killer Joe disarms and seduces Dottie with a story about a man who “lit his genitals on fire” in order to “teach his cheating girlfriend a lesson” is mind-bogglingly amusing.)

Friedkin—one of the still-kickin’ envoys of American cinema’s glory decade—reminds viewers exactly why they fell in love with his brand of ferocious, controversy-courting filmmaking over four decades ago. The Peckinpah-like atmospherics, and the near-traumatic intensity of the tightly shot exchanges, all make for one brazen, NSFW cannonball of a movie. It’s enough to make you forgive Friedkin’s recent flirtations with mediocrity, including Rules of Engagement and The Hunted.

And as a bonus, the acting is terrific, with special praise reserved for McConaughey and Temple. McConaughey continues on his winning streak, following 2011’s The Lincoln Lawyer, and this year’s Bernie and Magic Mike. Buy the hype: His depiction of the strutting angel-of-death Joe is a master class in combusting psychosis—and far and away the 42-year-old actor’s best performance to date. (“Do you want me to wear your face!!” he bellows like a storm at a cowering, defeated Sharla.) And Temple cements her status as an actress to keep an eye on, juicing the tragic cuteness and carefully drawled precocity of Dottie for all its worth. This work marks her unflinching dive into an ongoing trend—both alarming and risky—that involves blonde, very young-looking, very talented actresses.

All together, this is the best example of Texploitation that’s come out of the movies in quite some time—with a finale that will sear itself into your memory.

Caveat emptor: Among other things, if you see this movie, you will NEVER look at a piece of Kentucky Fried Chicken the same way ever again. (To divulge any more would spoil a chunk of the climax.) Now you can’t say I didn’t warn you.

Killer Joe gets a wider US release on Friday, August 3. The film is rated NC-17 for graphic disturbing content involving violence and sexuality, and a scene of brutality. Click here for local showtimes and tickets.