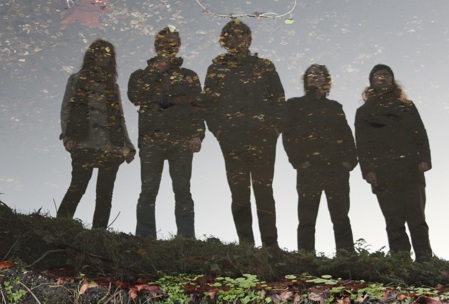 Dignan Porch
Nothing Bad Will Ever Happen
Captured Tracks

What kind of band calls itself Dignan Porch? According to the British quintet’s frontman, Joe Walsh, the name doesn’t mean anything in particular—it’s “just a combination of two words that at the time of creation seemed to capture the vibe of the band.” From the optimistic title of this sophomore release, you might think the vibe would be some kind of sunny, upbeat pop, while the band describes its sound as “weird fuzzy pop songs”—a descriptor that may prompt some to raise an eyebrow. It’s easy to use the trappings of the low-fi aesthetic to create a general sound without writing particularly well-crafted songs, and the rise of glo-fi and chillwave means that every indie-pop effort seems to have some kind of weirdly fuzzy sound.

Thankfully, Dignan Porch uses the fuzz judiciously, blearing certain elements while letting others shine through in songs that are dense yet never cluttered. Similar components pop up time and again on this album—harmonious British-accented vocals filtered through various effects, ringing guitars, otherworldly sounds—and the tracks tend to follow a similar structure, starting simply and adding layer after layer till a complex song emerges.

Its title notwithstanding, a faint sense of melancholy, if not foreboding, underlies most of the album. “Sad Shapes,” the record’s terrific first single, is typical. It begins with a clean guitar joined after a few seconds by a steady drum fill, and then a bassline; about 30 seconds into the track, a trippy warble of a guitar transforms it from a catchy summer pop song to a trippy psych-rock trance. Between the accents and the effects, the lyrics can be hard to make out, but evocative imagery and curious phrases shine through the deliberate obfuscation. “If you ever feel/that a place doesn’t exist till you’ve been there” sings Walsh in opening track “Picking Up Dust.” And from “TV Shows”: “She was so long ago/just like cancelled TV shows.” 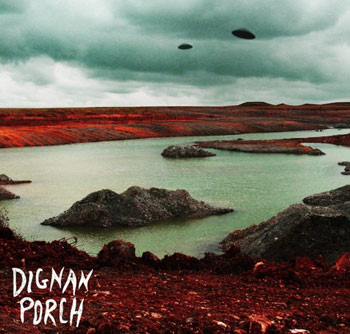 While the album occasionally feels repetitive, Dignan Porch has a keen ear for melody and manages to build distinctive, memorable songs from recurring themes. “Sleep With the Dead” opens with the faintest of cymbals and a quietly weaving guitar riff that lulls you into a reverie for a minute or so before the off-key, vaguely sinister vocals suddenly take things in a different direction. “Never” starts with a sharply ringing guitar, faintly beating bass, and off-beat vocals that sound as if they’re being gargled underwater before the full force of the melody hits. “Darkness” kicks off with a peppy, spritely melody but gets closer to the mood of the title when a heavy solo gives way to woozy sound effects that wouldn’t be out of place in a B-movie about Martian invaders—and what do you expect from an album whose cover features a pair of UFOs hovering over a supersaturated landscape? It’s a gorgeous, evocative, slightly off image worthy of an album that’s perfect for the hazily surreal days of late summer, a collection of weird-pop worthy of the name.