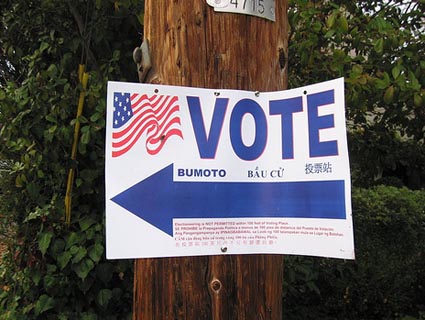 In a column that combines head-desk worthy analysis with glib race baiting, Ellis asserts that President Barack Obama is conducting a campaign of “chemical warfare” meant to “suppress turnout among white voters who might vote for Romney.” The words “chemical warfare” appear in quotes in the headline for some reason, even though they’re the author’s words. Ellis’ “evidence” for this consists of Obama’s negative ad campaign and a misleading Tom Edsall column in the New York Times that asserts over and over that Obama is suppressing the votes of white males without college degrees because if they make up less of the electorate, Obama has a better chance at being reelected. Based on Edsall and Ellis’ own arguments, Romney needs a less diverse electorate, but I doubt Ellis would write a column asserting on that basis alone that Romney is trying to stop blacks and Latinos from voting.

Neither column actually explains what Obama is doing to “suppress” white votes beyond running negative ads against his opponent, which all presidential candidates do. “It’s not a “negative campaign” they’re running. It’s purposefully toxic,” Ellis writes. What exactly makes Obama’s campaign more “toxic” than any other negative political ad campaign, so “toxic” that it need be distinguished? Ellis doesn’t bother to say.

When used correctly, the term “voter suppression” refers to erecting barriers to voting, legal or otherwise. That is, laws that restrict the franchise or otherwise make it harder to vote, or attempts to mislead voters away from the ballot box. Robocalls targeting black voters telling them they don’t need to vote are one example. “Voter suppression” doesn’t refer to running negative ads, which, again, are a part of any campaign.

Incidentally, what you wouldn’t know from Ellis’ column is that Obama is actually being outspent by Romney and his allies. In fact, the pro-Romney super PAC Restore Our Future has outraised every Democratic super PAC combined. If Obama and his allies $128 million in spending represents the “wall to end all wars,” how would Ellis describe the $179 million spent by Romney and the outside groups supporting him, according to a Washington Post analysis done last month? If I were the kind of person who used over-the-top war metaphors to describe negative campaigning, I’d say that if Obama is engaging in chemical warfare, Romney and his pals are carpeting swing-states with atomic bombs (see how silly that is?).

Equating negative campaigning with voter suppression ignores the level of actual voter suppression happening in the states. Ten states have passed restrictive voter ID laws, even though UFO sightings are more common than in-person voter fraud and the laws themselves could disenfranchise more than half a million people.  In Pennsylvania, where one analysis estimates that close to ten percent voters in the state could be disenfranchised by the state’s new voter ID law, Republican State House Majority Leader Mike Turzai declared the law would “allow Governor Romney to win the state of Pennsylvania.”

Unlike negative campaigning, these new restrictive voting laws represent actual voter suppression. Ellis’ column blurs the distinction between what can be reasonably expected in political campaigns and actual attempts to sever Americans from their right to elect their leaders, while feeding into a ludicrous conservative narrative of white racial victimhood that has been popular in some corners of the right ever since Obama took office.