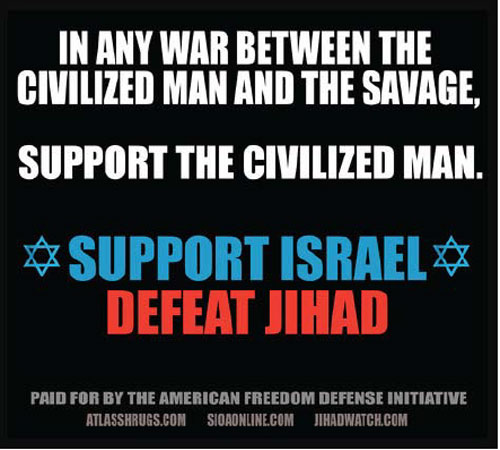 They’re popping up on public transit all over New York and San Francisco: Advertisements sponsored by anti-Muslim blogger Pamela Geller that imply Muslims are “savages,” dismiss “Islamophobia” as “Islamorealism,” and urge passengers to “support Israel” and “defeat jihad.”

This isn’t the first time Geller, who warned America about “stealth halal” turkeys last Thanksgiving, has used a public transit ad campaign to get her views out. In 2010, she sponsored ads attacking a proposed Islamic Community Center near Ground Zero as a “Mega Mosque” celebrating the 9/11 attacks. Another ad campaign Geller sponsored offered help to those who may have a “Fatwa on [their] head” and are considering “leaving Islam.” This time, her ads, which are sponsored by the American Freedom Defense Initiative (AFDI)—one of the many anti-Islam groups Geller is associated with, were so controversial that New York’s Metropolitan Transportation Authority initially rejected them.

One of Geller’s ads features a paraphrase of an Ayn Rand quote, “in any war between the civilized man and the savage, support the civilized man.” The text also urges people to “support Israel” and “defeat jihad.” When the MTA rejected that ad on the grounds that it was defamatory towards a group on the basis of religion, Geller and her attorney David Yerushalmi (the man behind much of the anti-Shariah legislation being proposed in conservative states) sued.

Yerushalmi, who once proposed making “adherence to Islam” a felony, wrote a letter to the MTA in which he argued that the ad referred to behavior rather than a group of people.  “[The ad] mentions neither individual nor group and it intends none.”

US District Court Judge Paul A. Engelmayer, after browsing Geller’s website, concluded that when “read as a reasonable person would, the AFDI Ad plainly depicts Muslims…as ‘savages.'” But Engelmayer also ruled that Geller’s ad was protected speech and that the MTA’s standard forbidding demeaning ads was unconstitutional because it was not evenly applied.

The MTA’s preexisting rules forbade ads attacking people based on race, color, creed, or gender. Those standards, Engelmayer wrote, would still allow ads stating that “fat people” are “slobs” and blondes are “bimbos,” or ads calling Democrats “communists” or tea partiers “barbaric,” he argued, because those attacks don’t involve race, color, creed, or gender. You could even, Engelmayer pointed out, post an ad accusing someone of being a child-abuser.

Still, Engelmayer left the door open for a policy prohibiting offensive ads in the future, as long as the standard didn’t discriminate based on content. “Today’s ruling does not disable city authorities from adopting rules that hold ads and commentary on the exteriors of buses to a standard of civility,” he wrote.

Engelmayer’s decision in the New York case made San Francisco authorities wary of rejecting Geller’s ads when she started placing them in San Francisco’s Muni public transit system. “The ads were posted because they…weren’t prohibited under our ad policy,” Paul Rose, a spokesman for Muni, said Tuesday, adding that the agency had received “a lot of feedback” over the ads. When Mother Jones asked about the MTA court case, Rose said, “it was something that we considered, it wasn’t the sole deciding factor.” A spokesperson for the MTA said they were “taking a careful look at their standards” in light of the ruling.

On Tuesday night, several hours after Rose spoke to Mother Jones, top San Francisco city officials released a more forceful joint statement saying that although Geller’s ad is protected by the First Amendment, it has “no value in facilitating constructive dialogue or advancing the cause of peace and justice.” The officials “condemn[ed] the use of any language that belittles, demeans or disparages others” and said the proceeds from the ads would be donated to the San Francisco Human Rights Commission. Muni will be reviewing its ad policy going forward, the officials added.

Federal courts have repeatedly upheld Americans’ right to make offensive statements in public venues, and this isn’t the first time a court has forced a city to accept one of Geller’s ad campaigns. She also won a lawsuit to get her “Leaving Islam?” ads onto public transit in Detroit.

Whether ads implying Muslims are “savages” speak to anyone other than Geller’s fans, though, is another question. Several Jewish and pro-Israel groups have condemned the ads.

“AFDI presents itself as a pro-Israel group. Our sense is that it’s just a mischaracterization of who they are. They are an anti-Muslim activist group, and you don’t have to be anti-Muslim to be pro-Israel,” says Michael Salberg, director of international affairs for the Anti-Defamation League. “The ads are offensive and inflammatory.” But despite calling the ads “inappropriate,” Salberg agreed with Engelmayer that Geller has a right to post them.

The Jewish Community Relations Council in San Francisco and the American Jewish Committee issued a statement saying that “We are steadfast in our support of Israel and our concern about the growing threat of Islamic radicalism, and steadfast in our opposition to anti-Muslim stereotypes.” On her blog, Geller referred to the ADL, the JCRC, and the AJC as “dhimmi Jewcidals,” writing, “Even the Judenrat didn’t protect and defend the Nazis’ war on the Jews. They went along, but they didn’t advance and promote it.”

Linda Sarsour, director of the Arab American Association of New York, said Geller “just wants attention” and is “wasting” her donors’ money. “I don’t think anyone that is a person of conscience supports this kind of rhetoric.”

Two summers ago, Geller and Yerushalmi successfully turned the late-summer silly season into a national political debate over the so-called “Ground Zero Mosque.” This year, with a presidential election looming, it looks like they’ll have to settle for annoying people on their commutes.

UPDATE: While the Geller quote of Rand is a paraphrase, in its original context Rand was referring to the Israeli-Palestinian conflict, characterizing Israelis as “civilized” and Palestinians as “savages.”

Further, why are the Arabs against Israel? (This is the main reason I support Israel.) The Arabs are one of the least developed cultures. They are typically nomads. Their culture is primitive, and they resent Israel because it’s the sole beachhead of modern science and civilization on their continent. When you have civilized men fighting savages, you support the civilized men, no matter who they are. Israel is a mixed economy inclined toward socialism. But when it comes to the power of the mind—the development of industry in that wasted desert continent—versus savages who don’t want to use their minds, then if one cares about the future of civilization, don’t wait for the government to do something. Give whatever you can. This is the first time I’ve contributed to a public cause: helping Israel in an emergency.

Given the quote’s context, it’s even harder to take seriously the claims from Geller’s lawyer that the ad does not broadly refer to Arabs or Muslims as “savages,” since that’s exactly what Rand meant.