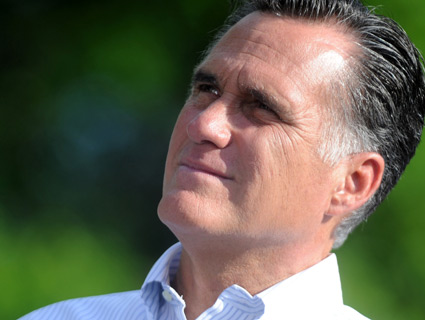 Now that the question of Mitt Romney’s departure from Bain Capital has blown up into a major subplot of the campaign season, it’s worth reviewing how the controversy initially evolved—in part because, even as journalists (starting with MoJo‘s David Corn) have continued to uncover questions about the timing of Romney’s retirement, professional fact-checking shops continue to maintain it’s unfair to tie Romney to Bain’s outsourcing investments.

June 20:The Washington Post’s “Fact Checker” column gives the Obama campaign four Pinocchios—its worst rating—for an ad calling Mitt Romney a “corporate raider [who] shipped jobs to China and Mexico.” WaPo notes that it is dinging the ad because two of the three outsourcing instances cited took place after Romney “stepped down from Bain to manage the Salt Lake City Olympics.”

June 21: The Washington Post’s Tom Hamburger reports that during Romney’s tenure at Bain, the company “invested in a series of firms that specialized in relocating jobs done by American workers to new facilities in low-wage countries like China and India.”

June 29: Factcheck.org publishes its own analysis of Obama’s outsourcing ads. It also takes the Obama campaign to task for “stretching” the truth; Hamburger’s story, it argues, “revealed that Bain invested in companies that did outsourcing. But the outsourcing resulted in the creation of jobs here and abroad.” Obama campaign spokeswoman Stephanie Cutter responds with a six-page letter defending the campaign’s assertions.

July 2: Mother Jones publishes the first story reporting that Securities and Exchange Commission (SEC) filings indicate Romney was involved with Bain beyond the point when he claims to have departed the firm, in 1999. In a piece on Bain’s investments in a medical waste company that disposed of aborted fetuses, David Corn points out that there are

“…questions regarding the timing of Romney’s departure from the private equity firm he founded…The SEC documents [reviewed by MoJo] undercut that defense, indicating that Romney still played a role in Bain investments until at least the end of 1999.”

Corn also reviews other evidence that suggests Romney departed from Bain later than he has claimed:

“The document Romney signed related to the Stericycle deal did identify him as an participant in that particular deal and the person in charge of several Bain entities. (Did Bain and Romney file a document with the SEC that was not accurate?) Moreover, in 1999, Bain and Romney both described his departure from Bain not as a resignation and far from absolute. The Boston Herald on February 12, 1999 reported, “Romney said he will stay on as a part-timer with Bain, providing input on investment and key personnel decisions.” And a Bain press release issued on July 19, 1999, noted that Romney was “currently on a part-time leave of absence”—and quoted Romney speaking for Bain Capital. In 2001 and 2002, Romney filed Massachusetts state disclosure forms noting he was the 100-percent owner of Bain Capital NY, Inc.—a Bain outfit that was incorporated in Delaware on April 13, 1999—two months after Romney’s supposed retirement from the firm. A May 2001 filing with the SEC identified Romney as ‘a member of the Management Committee’ of two Bain entities. And in 2007, the Washington Post reported that R. Bradford Malt, a Bain lawyer, said Romney took a ‘leave of absence’ when he assumed the Olympics post and retained sole ownership of the firm for two more years.”

In response to Corn’s questions, Bain releases a statement saying that:

“Mitt Romney retired from Bain Capital in February 1999. He has had no involvement in the management or investment activities of Bain Capital, or with any of its portfolio companies since that time.”

In a separate MoJo post, Nick Baumann emphasizes the critical nature of “the evidence that Romney was signing important documents for Bain—and running Bain-associated companies—well after February 1999, the point when both the Romney campaign and Bain itself claim that Romney left the firm.”

July 3: Corn reports on the controversy over Romney’s exit from Bain, linking to multiple SEC documents reviewed by Mother Jones.

July 10: Josh Marshall at Talking Points Memo reports on two more SEC documents, from 2001 and 2002, in which Romney is listed as “managing director of Bain Capital, Inc.”

July 11: Digging deeper into the SEC filings, Corn reports that while unquestionably in charge of Bain in 1998, Romney also invested heavily in a Chinese firm that relies on outsourcing by US corporations for its business.

July 12: The Boston Globe publishes its first story on the SEC filings, expanding on the details but not mentioning the reporting by Mother Jones and TPM. The Washington Post‘s Erik Wemple calls out the omission; Globe editor Marty Baron responds that:

“We believe the Globe advanced the story with a more comprehensive and complete look that broke significant news and included additional documents. However, our policy is to give credit to other news organizations for their work. In the editing and shortening process, I have learned, passages giving credit were removed. That was a mistake, and we are now adding appropriate credit back to the online version.”

The story is then amended to note:

“Evidence emerged last week in reports by Mother Jones that Romney had maintained an ongoing leadership role at Bain beyond February 1999. Citing SEC documents, the magazine said Romney had played a role in Bain investments “until at least the end of 1999” and that a 2001 document listed him as a member of the “management committee” of Bain funds. Talking Points Memo reported this week on additional SEC filings listing Romney’s position with Bain in July 2000 and February 2001.”

“To me, this illuminates one difference between the ethos of Web journalism and that of traditional media,” Corn told POLITICO. “In the former, you tend to do link-outs to indicate to readers what’s been done on the story before and to show how you are advancing that story. This highlights the iterative nature of Web journalism. In the latter, you tend to ignore other work and present yours as appearing in a vacuum. Remember the days when The New York Times and Washington Post would often ignore (or try to ignore) each other’s scoops as if to send a message: If we didn’t discover this, it doesn’t exist.”

July 12: The Huffington Post‘s Jason Cherkis and Ryan Grim report that in sworn testimony to establish his Massachusetts residency, Romney said he regularly returned to the state for “social trips and business trips” including board meetings for companies Bain had invested in.

July 12: National Public Radio’s “All Things Considered” reports on the controversy, noting that

“Romney has long said he left Bain in 1999 to go save the Salt Lake City Olympics, but government filings first reported on by Mother Jones magazine showed that, at least on paper, Romney remained CEO, chairman and sole owner of Bain for three more years.”

July 13: The New York Times runs a story (headlined “Campaigns Trade Salvos Over a Romney Role at Bain After 1999”) taking note of the Boston Globe report, but not MoJo or TPM.

July 13: Romney goes on ABC, CBS, CNN, Fox, and NBC (watch the supercut) defending his account of his departure, calling the controversy “the height of silliness,” and demanding an apology from Obama. Though the controversy has sparked new calls for Romney to release a full set of his tax returns, the candidate also reiterates that he will not release anything beyond the 2010 and 2011 returns.

“There’s no ambiguity there,” Corn points out, “in any way. But that’s not true.”

“The Romney camp maintains that a few signatures here or there are no big deal. But Romney declared in a document submitted to the US government that he had nothing to do with Bain operations after February 1999. In light of that, those signatures are not nothing.”

July 15: HuffPo‘s Cherkis and Grim report on another document, filed with the state of Massachusetts in 2002 (a month after Romney is sworn in as governor), that lists Romney as one of two “managing members of Bain Capital Investment Inc.”

July 16: Corn reports on another element of the Massachusetts testimony, in which Romney noted that there was “some transition away from my work in Boston,” with “a good deal of back and forth” to Massachusetts for the first few months after he left Bain for the Olympics job.

July 16: The New York Times runs another story on the SEC documents and the Massachusetts testimony, hat-tipping Talking Points Memo but no one else.

As more reporters dig through the documents, the story is sure to keep evolving.