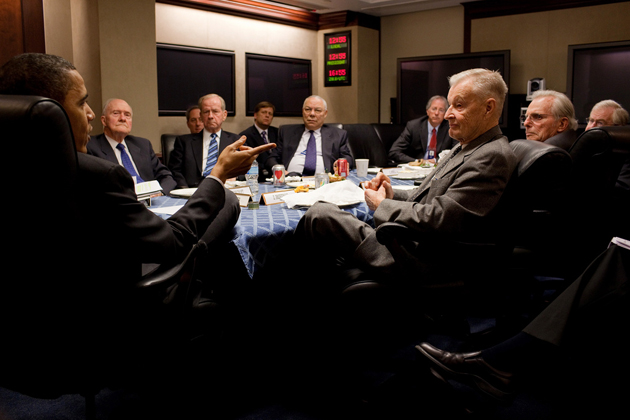 When my daughter was little and I read to her regularly, one illustrated book was a favorite of ours. In a series of scenes, it described frustrating incidents in the life of a young girl, each ending with the line—which my tiny daughter would boom out with remarkable force— “that makes me mad!” It was the book’s title and a repetitively cathartic moment in our reading lives. And it came to mind recently as, in my daily reading, I stumbled across repetitively mind-boggling numbers from the everyday life of our National Security Complex.

For our present national security moment, however, I might amend the book’s punch line slightly to: That makes no sense!

Now, think of something you learned about the Complex that fried your brain, try the line yourself… and we’ll get started.

Are you, for instance, worried about the safety of America’s “secrets”? Then you should breathe a sigh of relief and consider this headline from a recent article on the inside pages of my hometown paper: “Cost to Protect U.S. Secrets Doubles to Over $11 Billion.”

A government outfit few of us knew existed, the Information Security Oversight Office or ISOO, just released its “Report on Cost Estimates for Security Classification Activities for Fiscal Year 2011” (no price tag given, however, on producing the report or maintaining ISOO). Unclassified portions, written in classic bureaucratese, offer this precise figure for protecting our secrets, vetting our secrets’ protectors (no leakers please), and ensuring the safety of the whole shebang: $11.37 billion in 2011.

To put things in perspective, the transmission letter from Director John P. Fitzpatrick that came with the report makes it utterly clear why your taxpayer dollars, all $13 billion of them, are being spent this way: “Sustaining and increasing investment in classification and security measures is both necessary to maintaining the classification system and fundamental to the principles of transparency, participation, and collaboration.” It’s all to ensure transparency. George Orwell take that! Pow!

Now let’s try the line again, this time with more gusto: That makes no sense!

On the other hand, maybe it helps to think of this as the Complex’s version of inflation. Security protection, it turns out, only goes in one direction. And no wonder, since every year there’s so much more precious material written by people in an expanding Complex to protect from the prying eyes of spies, terrorists, and, well, you.

The official figure for documents classified by the U.S. government last year is—hold your hats on this one—92,064,862. And as WikiLeaks managed to release hundreds of thousands of them online a couple of years ago, that’s meant a bonanza of even more money for yet more rigorous protection.

You have to feel at least some dollop of pity for protection bureaucrats like Fitzgerald. While back in 1995 the U.S. government classified a mere 5,685,462 documents—in those days, we were practically a secret-less nation—today, of those 92 million sequestered documents, 26,058,678 were given a “top secret” classification. There are today almost five times as many “top secret” documents as total classified documents back then.

Here’s another kind of inflation (disguised as deflation): in 1996, the government declassified 196 million pages of documents. In 2011, that figure was 26.7 million. In other words, these days what becomes secret remains ever more inflatedly secret. That’s what qualifies as “transparency, participation, and collaboration” inside the Complex and in an administration that came into office proclaiming “sunshine” policies. (All of the above info thanks to another of those ISOO reports.) And keep in mind that the National Security Complex is proud of such figures!

So, today, the “people’s” government (your government) produces 92 million documents that no one except the nearly one million people with some kind of security clearance, including hundreds of thousands of private contractors, have access to. Don’t think of this as “overclassification,” which is a problem. Think of it as a way of life, and one that has ever less to do with you.

Now, honestly, don’t you feel that urge welling up? Go ahead. Don’t hold back: That makes no sense!

How about another form of security-protection inflation: polygraph tests within the Complex. A recent McClatchy investigation of the National Reconnaissance Office (NRO), which oversees U.S. spy satellites, found that lie-detector tests of employees and others had “spiked” in the last decade and had also grown far more intrusive, “pushing ethical and possibly legal limits.” In a program designed to catch spies and terrorists, the NRO’s polygraphers were, in fact, being given cash bonuses for “personal confessions” of “intimate details of the private lives of thousands of job applicants and employees… including drug use… suicide attempts, depression, and sexual deviancy.” The agency, which has 3,000 employees, conducted 8,000 polygraph tests last year.

McClatchy adds: “In 2002, the National Academies, the nonprofit institute that includes the National Academy of Sciences, concluded that the federal government shouldn’t use polygraph screening because it was too unreliable. Yet since then, in the Defense Department alone, the number of national-security polygraph tests has increased fivefold, to almost 46,000 annually.”

Now, think about those 46,000 lie-detector tests and can’t you just sense it creeping up on you? Go ahead. Don’t be shy! That makes no sense!

Or talking about security inflation, what about the “explosion of cell phone surveillance” recently reported by the New York Times—a staggering 1.3 million demands in 2011 “for subscriber information… from law enforcement agencies seeking text messages, caller locations and other information in the course of investigations”?

From the Complex to local police departments, such requests are increasing by 12%-16% annually. One of the companies getting the requests, AT&T, says that the numbers have tripled since 2007. And lest you think that 1.3 million is a mind-blowingly definitive figure, the Times adds that it’s only partial, and that the real one is “much higher.” In addition, some of those 1.3 million demands, sometimes not accompanied by court orders, are for multiple (or even masses of) customers, and so could be several times higher in terms of individuals surveilled. In other words, while those in the National Security Complex—and following their example, state and local law enforcement—are working hard to make themselves ever more opaque to us, we are meant to be ever more “transparent” to them.

These are only examples of a larger trend. Everywhere you see evidence of such numbers inflation in the Complex. And there’s another trend involved as well. Let’s call it by its name: paranoia. In the years since the 9/11 attacks, the Complex has made itself, if nothing else, utterly secure, and paranoia has been its closest companion. Thanks to its embrace of a paranoid worldview, it’s no longer the sort of place that experiences job cuts, nor is lack of infrastructure investment an issue, nor budget slashing a reality, nor prosecution for illegal acts a possibility.

A superstructure of “security” has been endlessly expanded based largely on the fear that terrorists will do you harm. As it happens, you’re no less in danger from avalanches (34 dead in the U.S. since November) or tunneling at the beach (12 dead between 1990 and 2006), not to speak of real perils like job loss, foreclosure, having your college debts follow you to the grave, and so many other things. But it matters little. The promise of safety from terror has worked. It’s been a money-maker, a stimulus-program creator, a job generator—for the Complex.

Back in 1964, Richard Hofstadter wrote a Harper’s Magazine essay entitled “The Paranoid Style in American Politics.” Then, however, paranoia as he described it, while distinctly all-American, remained largely a phenomenon of American politics—and often of the political fringe. Now, it turns out to be a guiding principle in the way we are governed.

Yes, we’re in a world filled with dangers. (Paranoia invariably has some basis, however twisted, in reality.) And significant among them is undoubtedly the danger the national security state represents to our lives, which are increasingly designed to be open books to its functionaries. Whether you like it or not, want it or not, care or not, you are ever more likely to be on file somewhere; you are ever more liable to be polygraphed until you “confess”; your cell phone, email, and texts are no longer your property; and one of the 30,000 employees of the Complex assigned to monitor American phone conversations and other communications may be checking you out. So it goes in twenty-first-century America.

Maybe if you haven’t said it yet, you’re finally feeling the urge. Go on then, give it a try.

That makes no sense!

There’s just one catch. The direction your government has taken—call it “transparency” or anything else you want—may boggle the mind. It may seem as idiotically wrong-headed as having 17 significant agencies and outfits in a single government on a budget of $80 billion-plus a year call the product of their work “intelligence.” It may not make sense to you, but it does make sense to the National Security Complex. For its “community,” the coupling of security with redundancy—with too much, too many, and always more—means you’re speaking the language of the gods, you’re hearing the music of the angels.

So much of what the Complex does may seem like overkill and its operations may often look laughable and inane. Unfortunately, the joke’s on you. In our country, the bureaucrats of the Complex increasingly have the power to make just about any absurdity they want the way of our world not just in practice, but often in court, too. And if you really think that makes no sense, then maybe you better put some thought into what’s to be done about it.

Tom Engelhardt, co-founder of the American Empire Project and author of The United States of Fear as well as The End of Victory Culture, runs the Nation Institute’s TomDispatch.com. His latest book, co-authored with Nick Turse, is Terminator Planet: The First History of Drone Warfare, 2001-2050. To listen to Timothy MacBain’s latest Tomcast audio interview in which Engelhardt discusses drone warfare and the Obama administration, click here or download it to your iPod here. Follow TomDispatch on Twitter @TomDispatch and join us on Facebook.

[A note of thanks: to my friend John Cobb for reminding me of Hofstadter’s essay and to Nick Turse from whose book title, The Complex: How the Military Invades Our Everyday Lives, I’ve long lifted the idea of the National Security Complex.]