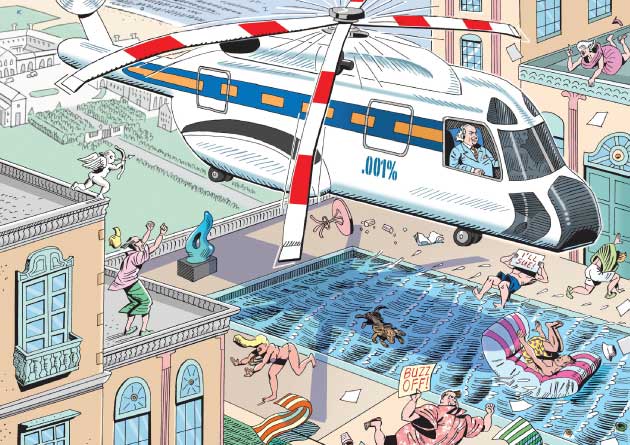 With twin 2,520-horsepower engines and up to 19 seats, the Sikorsky S-92 is among the world’s most powerful civilian helicopters. “Helibuses” typically service offshore oil platforms and the like, but two years ago billionaire industrialist Ira Rennert acquired a posh version to shuttle himself between Manhattan and Long Island’s exclusive Hamptons, where he owns a 63-acre, 110,000-square-foot villa complex. One of the first to notice the giant bird was Frank Dalene, founder and CEO of a successful luxury homebuilding company, who lives on a ridge along Rennert’s flight path. Its whumping rotor was like “a lightning bolt striking nearby,” says Dalene, a fast-talking 58-year-old with a long nose and narrow-set eyes. He blames the vibrations for “literally damaging my home.”

Dalene and his neighbors near the East Hampton Airport might have abided Rennert’s choppers—he owns two—had they been an anomaly. But the situation has become intolerable over the past few years, Dalene says, thanks to a whirlybird craze among the investment bankers and hedge fund gurus who weekend in Sagaponack and Southampton. On Friday afternoons the tiny airport is a beehive. Come summer, some CEOs commute daily between their beach chalets and Manhattan’s East 34th Street Heliport. “They don’t give a crap about nobody,” Dalene gripes.

Last year, he founded the Quiet Skies Coalition, an anti-helicopter group that has become one of the most potent political forces in the Hamptons. Its wealthy members north of the Montauk Highway launched what Dalene describes as a “knock-down, drag-out battle” against “ultra-wealthy” helicopter owners who largely live on the south side, accusing them of shattering the island’s tranquillity, contributing to climate change, and poisoning the air with leaded fuel. “I am beginning to think Mr. Rennert is practicing class warfare,” Dalene wrote Rennert’s Manhattan secretary in an email that likened the noise assaults to “throwing their garbage on the other side of the tracks for us poor folks to live with.”

Over on the poor side of the tracks, Dalene owns side-by-side properties assessed at around $2.1 million. On one wall of the potato barn he’s converted into an office is a photo of him with Newt Gingrich. On another wall hangs a framed “Republican of the Year” award from the National Republican Congressional Committee. But having deemed local Republicans too pro-helicopter, Dalene says he intends to register as an independent. (Mitt Romney attended a trio of fundraisers in the Hamptons this weekend, including a $50,000-a-person event at the estate of David Koch.)

We climb into his Toyota Tundra and head across the highway for a tour of the third most expensive zip code in America. We pass by some hedgerows and take a bridge over Sag Pond, rechristened “Goldman Pond” by the locals. “This is one of the first ones that we built for one of the Goldman Sachs partners,” Dalene observes, gesturing at a shingled manse with a second-story deck framed by a reverse gambrel and doghouse dormers. Dalene’s company renovated the priciest home ever sold in the Hamptons: a $60 million, 13,000-square-footer originally commissioned by banking tycoon J.P. Morgan. “People actually complain that these 10,000-square-feet houses are the mega-mansions,” he says, incredulously.

The House That Ate the Hamptons 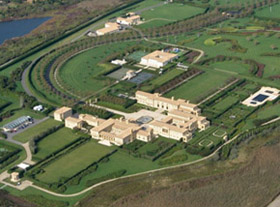 Wikimedia CommonsThought to be America’s largest inhabited residence, Fair Field, Ira Rennert’s estate in Sagaponack, cost $100 million to build and is worth at least $200 million. The 110,000-square-foot complex has 29 bedrooms, 39 bathrooms, three pools, two libraries, a bowling alley, a playground, a full theater, its own power plant, and a garage for 100 cars. A local architect who approved the project praised its “restrained classic design.” The main building is 66,000 square feet, 28 times bigger than the average new house. It’s the third-largest private home in America. (No. 1 is the 174,000- square-foot Biltmore Estate.) The mansion inspired a novel, The House That Ate the Hamptons. Kurt Vonnegut called it “the greatest book ever written.” In a rare public appearance, Rennert described his mega-mansion as “old age and loneliness insurance.”

But they have nothing on Fair Field, the Italianate estate Rennert finished building nine years ago in Sagaponack. Believed to be the nation’s largest inhabited residence, it rivals fabled goliaths like the Biltmore Estate or Hearst Castle. The multibuilding complex has 29 bedrooms, three swimming pools, a 164-seat theater, and a “playhouse” containing a basketball court, gym, and two-lane bowling alley. “It looks like something you would see in Dubai,” Dalene sniffs.

Indeed, local disdain for the house—and its owner—is one thing that seems to unite the Hamptons’ feuding economic classes. First Rennert’s neighbors sued unsuccessfully to halt the construction. Then, in 2007, not long after Sagaponack was incorporated as a village, its trustees voted to cap future abodes at 12,000 square feet. “It’s a fucking monster!” marvels a bulldozer operator from Westhampton Beach, who takes a break from shaping sand dunes to gaze up at Rennert’s 12 chimneys. “I could put my entire fucking family in that house and not even see ’em all day—aunts, uncles, everybody!”

On the dunes just behind Rennert’s estate, I’m confronted by a security guard who springs from the bushes. When I inquire after the master of the house, he tells me to “leave right now or I’m going to have you arrested,” which I take to mean Mr. Rennert is unavailable.

More than perhaps anybody else in finance, Ira Leon Rennert has based his career on telling everybody else to fuck off. An intensely private 78-year-old with a leonine mane of white hair, he emerged from a middle-class home in East Flatbush, Brooklyn, to become one of Wall Street’s most renowned bad boys. He was a self-employed stockbroker when the National Association of Securities Dealers yanked his certification in 1964—effectively blackballing him from trading—for repeatedly operating with insufficient capital. Rennert jumped into private equity, issuing millions in junk bonds to finance the purchase of dirty mining and industrial outfits. In 1995 and 1996, his Utah-based Magnesium Corporation was the nation’s worst polluter.

Rennert paid himself and his holding company, the Renco Group, hundreds of millions in management fees and dividends. But when commodity prices tanked in the late ’90s, his companies began choking on debt. A Kentucky coal mine, an Ohio steel mill, and MagCorp went bust, and bondholders of the latter two sued him for fraud. (The Ohio complaint was withdrawn during bankruptcy proceedings; the MagCorp case is still pending.)

“It’s a fucking monster!” marvels a bulldozer operator gazing at Rennert’s 12 chimneys. “I could put my entire fucking family in that house and not even see ’em all day—aunts, uncles, everybody!”

By the early aughts Rennert had found another winner in AM General, maker of the Humvee. The company has spent more than $3.5 million on defense lobbying and made a killing off the wars in Iraq and Afghanistan. In 2004, after the novelty of the popular Hummer H2 civilian model began to fade, Rennert sold a majority stake to Ronald Perelman, the billionaire owner of Revlon, whose heavily guarded estate on Georgica Pond is described as the “cynosure of Hamptons nouvelle society” by local author Steven Gaines in his book Philistines at the Hedgerow. (The New York Times reported that the recent Romney fundraiser hosted by Perelman at his “home, er, palace” might have brought in $3 million.)

Rennert and Perelman, both Orthodox Jews, are members of the Fifth Avenue Synagogue, a stronghold of Israel hardliners. Rennert, a friend of Prime Minister Benjamin Netanyahu, has helped fund restoration of an ancient tunnel system near Jerusalem’s Wailing Wall, where the 1996 opening of a long-blocked route set off deadly riots. (Suspecting an Israeli plot to dig under the al-Aqsa mosque, Arabs faced off against security forces, and at least 70 were killed.) More recently, Rennert has provided cash and support for groups like the Elad Association and Ateret Cohanim, which promote the construction of Jewish homes in Arab sections of Jerusalem.

But nothing Rennert has touched is as controversial as his lead smelters, Dickensian monuments to human misery. In 2001, tests revealed that more than half of the children living near the smelter owned by Renco’s Doe Run Resources in Herculaneum, Missouri, had enough lead in their blood to cause brain damage. Last year, it finally settled a lawsuit filed on behalf of kids affected by the pollution.

Clouds of sulfur dioxide from Doe Run Peru’s La Oroya smelter have scalded the surrounding Andean hills. Rather than cleaning up its mess, Renco has spent $305,000 over the past two years lobbying the US government to help convince Peru not to expropriate the plant. Renco is also suing Peru for $800 million, arguing that its demands for a timely cleanup violate the US-Peru free trade agreement. “This is a man who does not have a heart,” says the father of three lead-poisoned children in La Oroya, who requested anonymity because he fears reprisals. “As soon as we speak out, the following day they are already accusing us, harassing us…I don’t think our voices are being heard.”

Dalene figures the specter of pollution-spewing copters will compel his fellow Hamptonites to pay heed. “This is real,” he insists. His cause has the support of Sen. Chuck Schumer (D-N.Y.), who in 2009 issued a statement complaining that noisy helicopters have “tortured and tormented Long Island communities for far too long.” More recently, the coalition took on the East Hampton Aviation Association—a nonprofit Dalene accuses of being a dark-money front for billionaires—with a campaign of dueling newspaper ads that helped get a pair of anti-chopper Democrats elected to the town board.

Dalene now expects new federal aviation regulations to drive more copter traffic to a southerly route that passes over the estate of Rennert’s pal Perelman. He is confident that the new crop of NIMBYs poking up around Georgica Pond can help bring Rennert down to earth.

But he’s not leaving it to chance. Armed with a federal database of tail numbers, he has identified the owners of 162 helicopters that have buzzed his house—”everybody from Mayor Daley in Chicago all the way to celebrities you can’t believe”—and has photographed passengers at the airport by means of a huge telephoto lens. He’s entertaining the notion of publishing his celebrity shame list and staging protests at the airport this summer. But “we will be respectful,” Dalene assures me. “This is not an Occupy thing.”