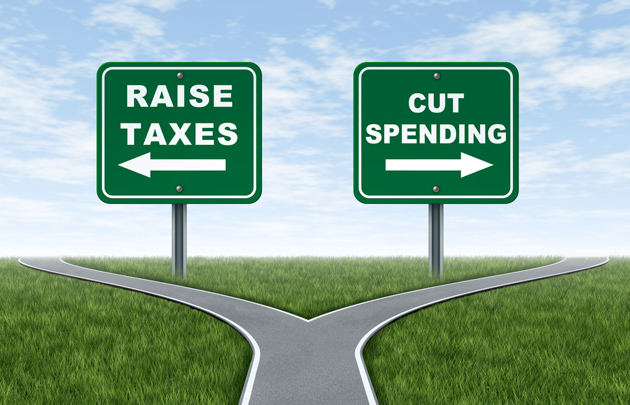 We’re at the edge of the cliff of deficit disaster! National security spending is being, or will soon be, slashed to the bone! Obamacare will sink the ship of state!

Each of these claims has grabbed national attention in a big way, sucking up years’ worth of precious airtime. That’s a serious bummer, since each of them is a spending myth of the first order. Let’s pop them, one by one, and move on to the truly urgent business of a nation that is indeed on the edge.

This myth has had the effect of binding the hands of elected officials and policymakers at every level of government. It has also emboldened those who claim that we must cut government spending as quickly, as radically, as deeply as possible.

In fact, we’ve been here before. In 2009, the federal budget deficit was a whopping 10.1% of the American economy and back in 1943, in the midst of World War II, it was three times that—30.3%. This fiscal year the deficit will total around 7.6%. Yes, that is big. But in the Congressional Budget Office’s grimmest projections, that figure will fall to 6.3% next year, and 5.8% in fiscal 2014. In 1983, under President Reagan, the deficit hit 6% of the economy, and by 1998, that had turned into a surplus. So, while projected deficits remain large, they’re neither historically unprecedented, nor insurmountable.

More important still, the size of the deficit is no sign that lawmakers should make immediate deep cuts in spending. In fact, history tells us that such reductions are guaranteed to harm, if not cripple, an economy still teetering at the edge of recession.

A number of leading economists are now busy explaining why the deficit this year actually ought to be a lot larger, not smaller; why there should be more government spending, including aid to state and local governments, which would create new jobs and prevent layoffs in areas like education and law enforcement. Such efforts, working in tandem with slow but positive job growth in the private sector, might indeed mean genuine recovery. Government budget cuts, on the other hand, offset private-sector gains with the huge and depressing effect of public-sector layoffs, and have damaging ripple effects on the rest of the economy as well.

When the economy is healthier, a host of promising options are at hand for lawmakers who want to narrow the gap between spending and tax revenue. For example, loopholes and deductions in the tax code that hand enormous subsidies to wealthy Americans and corporations will cost the Treasury around $1.3 trillion in lost revenue this year alone—more, that is, than the entire budget deficit. Closing some of them would make great strides toward significant deficit reductions.

Alarmingly, the deficit-reduction fever that’s resulted from this first spending myth has led many Americans to throw their support behind de-investment in domestic priorities like education, research, and infrastructure—cuts that threaten to undo generations of progress. This is in part the result of myth number two.

Spending Myth 2: Military and other national security spending have already taken their lumps and future budget-cutting efforts will have to take aim at domestic programs instead.

The very idea that military spending has already been deeply cut in service to deficit reduction is not only false, but in the realm of fantasy. The real story: despite headlines about “slashed” Pentagon spending and “doomsday” plans for more, no actual cuts to the defense budget have yet taken place. In fact, since 2001, to quote former Defense Secretary Robert M. Gates, defense spending has grown like a “gusher.” The Department of Defense base budget nearly doubled in the space of a decade. Now, the Pentagon is likely to face an exceedingly modest 2.5% budget cut in fiscal 2013, “paring” its budget down to a mere $525 billion—with possible additional cuts shaving off another $55 billion next year if Congress allows the Budget Control Act, a.k.a. “sequestration,” to take effect.

But don’t hold your breath waiting for that to happen. It’s likely that lawmakers will, at the last moment, come to an agreement to cancel those extra cuts. In other words, the notion that our military, which has been experiencing financial boom times even in tough times, has felt significant deficit-slashing pain—or has even been cut at all—is the Pentagon equivalent of a unicorn.

What this does mean, however, is that lawmakers heading down the budget-cutting path can find plenty of savings in the enormous defense and national security budgets. Moreover, cuts there would be less harmful to the economy than reductions in domestic spending.

A group of military budget experts, for example, found that cutting many costly and obsolete weapons programs could save billions of dollars each year, and investing that money in domestic priorities like education and health care would spur the economy. That’s because those sectors create more jobs per dollar than military programs do. And that leads us to myth three.

False claims about the higher cost of government health programs have led many people to demand that health-care solutions come from the private sector. Advocates of this have been much aided by the complexity of sorting out health costs, which has provided the necessary smoke and mirrors to camouflage this whopping lie.

Health spending is indeed growing faster than any other part of the federal budget. It’s gone from a measly 7% in 1976 to nearly a quarter today—and that’s truly a cause for concern. But health care costs, public and private, have been on the rise across the developed world for decades. And cost growth in government programs like Medicare has actually been slower than in private health insurance. That’s because the federal government has important advantages over private insurance companies when it comes to health care. For example, as a huge player in the health-care market, the federal government has been successful at negotiating lower prices than small private insurers can. And that helps us de-bunk myth number four.

Spending Myth 4: The Affordable Care Act—Obamacare—will bankrupt the federal government while levying the biggest tax in US history.

Wrong again. According to the Congressional Budget Office, this health-reform legislation will reduce budget deficits by $119 billion between now and 2019. And only around 1% of American households will end up paying a penalty for lacking health insurance.

While the Affordable Care Act is hardly a panacea for the many problems in US health care, it does at least start to address the pressing issue of rising costs—and it incorporates some of the best wisdom on how to do so. Health-policy experts have explored phasing out the fee-for-service payment system—in which doctors are paid for each test and procedure they perform—in favor of something akin to pay-for-performance. This transition would reward medical professionals for delivering more effective, coordinated, and efficient care—and save a lot of money by reducing waste.

The Affordable Care Act begins implementing such changes in the Medicare program, and it explores other important cost-containment measures. In other words, it lays the groundwork for potentially far deeper budgetary savings down the road.

Having cleared the landscape of four stubborn spending myths, it should be easier to see straight to the stuff that really matters. Financial hardship facing millions of Americans ought to be our top concern. Between 2007 and 2010, the median family lost nearly 40% of its net worth. Neither steep deficits, nor disagreement over military spending and health reform should eclipse this as our most pressing challenge.

If lawmakers skipped the myth-making and began putting America’s resources into a series of domestic investments that would spur the economy now, their acts would yield dividends for years to come. That means pushing education and job training, plus a host of job-creation measures, to the top of the priority list, and setting aside initiatives based on fear and fantasy.

Mattea Kramer, a TomDispatch regular, is senior research analyst at the National Priorities Project and lead author of the new book A People’s Guide to the Federal Budget. Follow TomDispatch on Twitter @TomDispatch and join us on Facebook, and check out the latest TD book, Terminator Planet: The First History of Drone Warfare, 2001-2050.