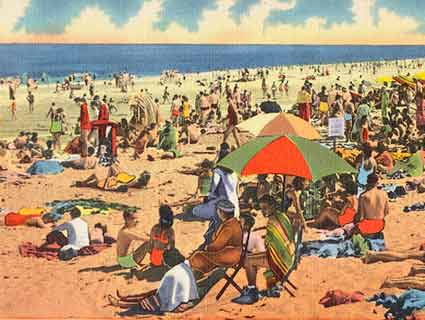 With temperatures in the triple digits in many parts of the United States and not far from it in the rest of the country, lots of people are seeking relief on the sandy shores. But before you head to the beach, you might want to make sure that cool ocean air isn’t carrying a whiff of sewage first.

Each year, the Natural Resources Defense Council puts out a handy guide on water quality at ocean and Great Lake beaches around the US. The latest report finds that 8 percent of beach water samples collected by local officials in 2011 violated public health standards, leading public health agencies to issue advisories or shut beaches down entirely. That might not seem like a lot, but it adds up. Last year had the third-highest number of closures or advisories in the 22 years NRDC has published the report. Water quality was just as bad as it was in 2010, NRDC found.

“We’re not seeing improvements the way that one would hope we would see,” said Jon Devine, a senior attorney in NRDC’s water program and the author of the report. “That indicates a need for national policies that target the biggest sources of beach pollution.”

NRDC pulled reports on 200 of the most popular beaches in the country; we mapped them below.

Each point on this map represents a beach; click one to see the percentage of water samples tested that exceeded national pollution standards.

Often when we talk about beach closures, we use nice euphemisms like “pollution” or “bacteria.” But what that really means is poop. Yes, when your beach is closed it’s most often because waste—human and animal—has caused the levels of bacteria and other unhealthy pathogens to spike in that body of water. Much of that comes from storm-water runoff, when the rain carries sewage from overflowing septic systems, yards laced with Fido’s droppings, and a variety of other sources to nearby waterways. Contamination can also come from wildlife or accidents at sewage treatment plants, but in the vast majority of cases the folks doing the water monitoring don’t really know exactly where all the, well, shit came from.

Beach bacteria can cause gastrointestinal distress, skin rashes, and eye infections, or much worse diseases like meningitis and hepatitis.

The bacteria can cause gastrointestinal distress like nausea and diarrhea, skin rashes, and eye infections, or much worse diseases like meningitis and hepatitis. Dirty beaches are much more hazardous for the people with compromised immune systems or children, who are more likely to swallow the water while swimming. But even having a “clean” beach might not be enough. In fact, as NRDC points out, even beaches that meet the federal standards would still sicken as many as 1 in 28 swimmers.

The EPA is currently considering new standards for recreational water quality, but NRDC says the new rules aren’t expected to be much better than the current 20-year-old rules. The group would also like to see new guidelines to help reduce the amount of storm-water runoff, through promotion of green roofs and other smart urban-planning techniques that will help stop urban and suburban pollution from making its way into our waterways.

But back to the report, since you probably want to know what beaches to avoid. Here are the worst offenders, the beaches where a quarter of the samples taken last year found levels of contamination above national standards:

And here are the best beaches—the ones that earned five stars: