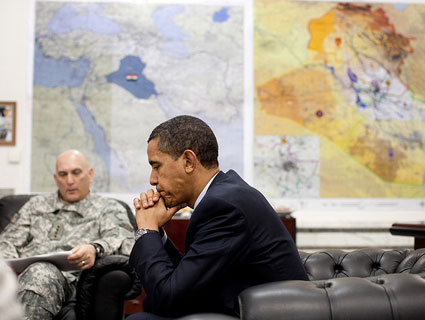 Congress is finally standing up to President Barack Obama on targeted killing. Almost a year after three American citizens were killed in US drone strikes, legislators are pushing the administration to explain why it believes it’s legal to kill American terror suspects overseas.

Congress is considering two measures that would compel the Obama administration to show members of Congress what Sen. Chuck Grassley (R-Iowa) calls Obama’s “license to kill”: internal memos outlining the legal justification for killing Americans overseas without charge or trial. Legislators have been asking administration officials to release the documents for nearly a year, raising the issue multiple times in hearings and letters. But the new proposals, including one from Sen. John Cornyn (R-Texas) first flagged by blogger Marcy Wheeler and another in a separate intelligence bill, aren’t requests—they would mandate disclosure. That shift shows both Republicans and Democrats are growing impatient with the lack of transparency on targeted killings.

After radical American-born cleric Anwar al-Awlaki, alleged American Al Qaeda propagandist Samir Khan, and Awlaki’s 16-year-old son, Abdulrahman, were killed by drone strikes in Yemen in September and October of last year, Republican and Democratic members of Congress sent letters asking the Obama administration to explain the legal justification for targeted killing of American citizens. “We got a license to kill Americans, and we don’t know the legal basis for the license to kill Americans…because our letters haven’t been answered,” Grassley complained during a Senate Judiciary Committee hearing last week.

The New York Times has confirmed the existence of a secret memo from the Justice Department’s Office of Legal Counsel (OLC)—the branch of the government that tells the president whether what he wants to do is legal—outlining the legal basis for the targeted killing program. But the Obama administration has yet to acknowledge that any such memo exists, despite defending the targeted killing policy in speeches and public appearances, and is currently fighting an American Civil Liberties Union lawsuit that seeks to force the government to reveal the legal justification for targeted killing. Now Congress seems to be moving towards the ACLU’s position.

Cornyn’s amendment would require the Obama administration to provide the Office of Legal Counsel memo justifying the killing program to legislators on several congressional committees. Democrats on the Judiciary Committee voted to shelve Cornyn’s proposal, but that doesn’t mean the effort is dead. Cornyn could propose his amendment again later this year, and there’s also a section of a separate intelligence bill that would compel the administration to share all of the Justice Department’s legal opinions on intelligence matters with the congressional intelligence committees—unless the White House invokes executive privilege.

“We’re not mere supplicants to the executive branch, we are a coequal branch of government,” Cornyn said during discussion of his amendment in the Senate committee hearing last week. “So it is insufficient to say pretty please, Mr. President, pretty please, Mr. Attorney General, will you please tell us the legal authority by which you claim the authority to kill American citizens abroad?” (Cornyn also noted that just because he wants to see the memo doesn’t mean he’d necessarily disagree with its contents.)

Neither Cornyn’s proposal nor the intelligence bill would require the administration have to share the OLC memo with the media or the public, even in redacted form. But releasing the memo to legislators would at least allow Congress to perform more effective oversight of the targeted killing program, argues Chris Anders, legislative counsel for the ACLU. The Los Angeles Times reported in June that at the initiative of Sen. Dianne Feinstein (D-Calif.), who chairs the Senate Select Committee on Intelligence, Congress has been keeping a closer eye on the use of drone strikes. But critics like Anders argue that it’s hard for oversight to be effective if legislators don’t know what standard the Obama administration is using to determine whom to kill. “The key committees of Congress don’t even know what the legal standard is or how they’re applying it, so how can they do meaningful oversight?” Anders asks. The intelligence bill and Cornyn’s proposal could fix that problem.

More oversight, though, is not enough, Anders says—regular Americans should know what kind of conduct could lead to them being blown up by a deadly flying robot. “There’s a fundamental due process right to know what it is you can’t do in order to avoid getting killed by the order of the president,” he says. Grassley, at least, seems to be on board with that idea—a Grassley aide said the senator would “support making a redacted analysis public if possible.” A Feinstein aide also suggested a push for public disclosure could follow Congress getting access to the legal analysis of targeted killing. And even if the OLC memo is only shared with Congress, broadening access to the document makes it more likely that it could be leaked to the press.

Now that legislators on both sides of the aisle are pushing for more disclosure, the chances the public will learn about the contents of the targeted killing memos has increased dramatically. Still, Anders says, it’s easy to see a difference between how hard Congress pushed for George W. Bush-era memos authorizing torture and the deferential stance Congress adopted during the first three and a half years of the Obama administration.

“When it was Bush, it was much easier to get [legislators] to demand public disclosure,” Anders says.