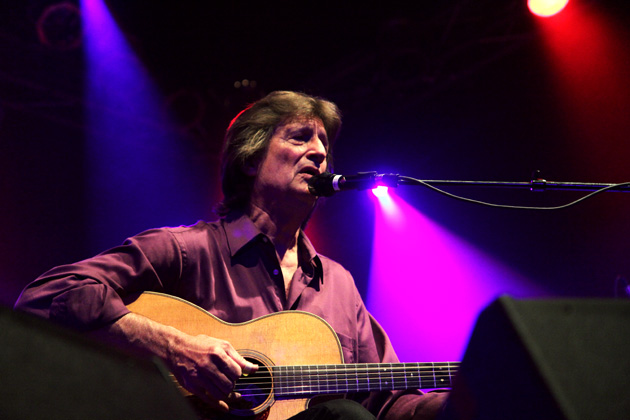 Inside New York City’s Highline Ballroom, a gaggle of musicians and techies throng around a folding table stacked with cold beer and sandwiches. Most wear loose-fitting traveling clothes; they’ve just gotten off the road from home base in Boston, finishing the first leg of a tour that will stretch well into next year. A tall figure in black pushes back his mane of hair, more grey than the room’s average, and cuts a path through the crowd to a side room.

“Usually I play solo, so I’m not used to taking care of everybody,” he says, closing the door behind us.

Chris Smither has been in and out of rooms like this for nearly half a century, but he’s still getting used to bringing a band this size along with him. A singer-songwriter who points to the stripped-down styles of Lightnin’ Hopkins and Mississippi John Hurt as major influences, Smither says it’s taken until recently to feel comfortable touring with a full backing band like the one on his twelfth studio album, last month’s Hundred Dollar Valentine.

Smither, now 68, rose to prominence in the early ’70s as a solo artist with an ear for a unique interweaving of Cambridge folk sensibilities with Delta blues technique, thumping bass lines on the low strings while plucking melodies on the high strings, tapping time with his foot, and singing in a voice with a low end that cuts like the edge of a broken whiskey bottle. He was never one to shun a little good sonic company, forging lifelong partnerships with the likes of Bonnie Raitt and Dr. John, but the arrangements on Hundred Dollar Valentine are thicker than usual, with a full complement of electric guitar, backing vocals, harmonica, bass, and drums on nearly every tune.

“I’ve found sympathetic ears” in this band, he says. “People who like my music for the right reasons, by which I mean my reasons.” He laughs, as he does between nearly every sentence, and the creases in his face seem to make his eyes sink even farther back in his head. He’s relaxed and comfortable, and still is an hour later in the spotlight. On stage he seems hardly to notice the musicians behind him. There’s no conducting; they can keep up with the train or fall off. Smither’s foot will still be tapping either way.

That stage presence reflects Smither’s entire philosophy about orchestration, which is essentially that no matter how many people are playing, he’s still a solo act. “Even with all the other pieces, there’s a basic simplicity,” he says. For that reason, he spent most of his career resisting anything that strayed too close to over-production, fearing the technological possibilities of the studio would overwhelm his fragile melodies. He started to open up with producer Steven Bruton on 1995’s Up on the Lowdown, and has come around even more with the nudging of current producer (and electric guitarist) David “Goody” Goodrich.

A bigger band isn’t the only thing special about this album: It’s the first to be stocked solely with original compositions. Smither has long been an avid player of covers, he says, “not because I don’t have enough songs of my own. I just like people to understand where I’m coming from, what I admire.” For this album, Goodrich convinced Smither it was time to cover himself, to dust off tunes that hadn’t been heard in ages and toss them in the pot with a suite of new ones. It’s the kind of album you could listen to on a long road trip in a pickup truck across some lonely stretch of America: songs about broken hearts, getting old, and how sometimes all you can do is turn your face to the wind and press on.

But Smither never dwells too long in minor keys; in a column for American Songwriter he called the album “another collection of hope seasoned with resignation disguised as acceptance.” His exploration of these themes is not purely academic: early in his career Smither battled a decade-long bout of severe alcoholism, and his recovery has since fueled a resolute hopefulness that permeates even the saddest songs.

From his vantage point at the start of this tour, Smither doesn’t see himself packing it in anytime soon. He absently touches the brace on his left wrist: arthritis, creeping up after decades of throttling a guitar neck. “I have a feeling when I’m done I’ll know it,” he says. “But I don’t know it yet.”