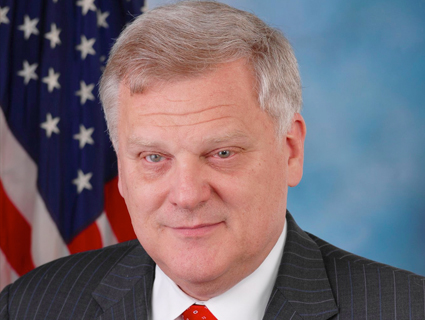 A conservative congressman today sent House staffers an official email trashing pro-gay protesters of Chick-fil-A as “malicious” critics who “resort to hate,” exhorting his colleagues to rush to the fast-food chain’s aid as its brand reputation takes a tailspin.

Rep. Alan Nunnelee (R-Miss.) sent the “Dear Colleague” letter to his fellow lawmakers’ offices, calling on them to sign a letter of support he’d drafted to Chick-fil-A President Dan Cathy. (Read the full letter below.) Cathy has recently come under fire for a recent interview in which he attacked gay marriage as violating “the biblical definition of a family unit.” Chick-fil-A reportedly donated more than $2 million to anti-gay causes in 2009. Employees of the fast-food chain and their families have also given nearly $200,000 in direct donations to conservative national politicians, including tens of thousands of dollars to presidential also-ran Herman Cain this election cycle.

In his letter, Nunnelee writes, “Many on the left have called the radical idea that a company embrace traditional values and support strengthening families ‘bigoted. At a time when holding a position on family values provokes such a vitriolic response, I invite you to join with me in a letter to Dan Cathy supporting Chick-fil-A’s stand.” The letter asks Nunnelee’s colleagues to sign on before a deadline of July 31.

Also included in the email is Nunnelee’s draft letter to Cathy, which, hails Chick-fil-A as “an American success story” that should be applauded “in the face of unfair and malicious criticism.”

“The example of quality, hard work, and charity demonstrated by Chick-fil-A is one that others who, faced with opposing views, resort to hate would do well to emulate,” it adds.

But perhaps not at the moment. As CNBC News’ Ryan Ruggiero pointed out Friday afternoon, Chick-fil-A’s overall consumer brand health, as measured by consumer opinion research firm YouGov, has dropped to a two-year low, plummeting 28 percent in the four days following Cathy’s interview. “Chick-Fil-A’s perception with fast food eaters nationwide has taken a significant hit in most regions of the country,” Ruggiero added. 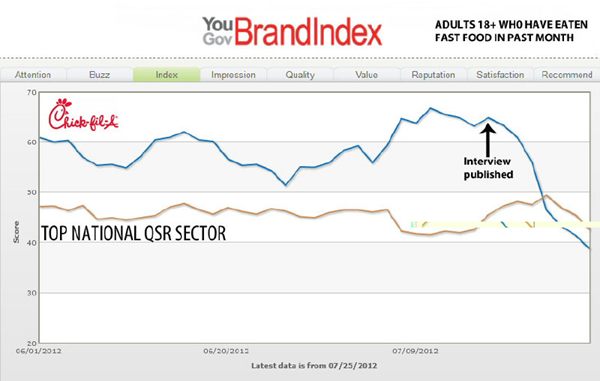 Chick-fil-A’s flagging reputation Courtesy @RyanRuggiero/LockerzAs for Nunnelee’s letter campaign, it’s unclear just how much support he’ll garner from colleagues. But the Democratic congressional staffer who forwarded the email to Mother Jones poked fun at a Republican legislator establishing Chick-fil-A’s defense as a high priority for congressional GOPers. “Eventually they’ll probably turn their attention to avoiding sequestration,” the staffer wrote sardonically. “They just have to handle all the big issues first.”